Tufts researchers investigate stress as a potential cause of periodontal disease 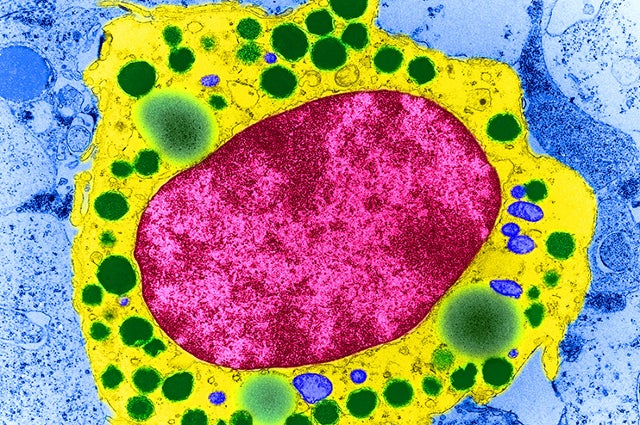 We all know what contributes to gum disease—poor brushing, forgetting to floss, avoiding checkups, smoking. But what about a tough day at the office or dire financial straits? Surprisingly, the stress brought on by emotional struggles might have just as much to do with the disease, according to a review of the literature by three Tufts researchers.

“It’s been shown there is a significant association between emotional stress and periodontal disease,” says Evangelos Papathanasiou, DG11, an assistant professor of periodontology at Tufts School of Dental Medicine. “It definitely needs to be explored further.”

Before he came to Tufts, Papathanasiou was a dentist in the Greek air force and saw a number of soldiers under high stress who developed mouth ulcers and bleeding gums. Closer to home, he recently experienced bleeding while brushing his own teeth. “I realize that when I am under stress, my gums tend to bleed more when I am brushing,” he says. Papathanasiou was aware of previous studies that showed that financial strain and academic stress can lead to more plaque and gum inflammation.

That led him and two pathobiologists from Tufts’ Sackler School of Graduate Biomedical Sciences, Theoharis Theoharides and Iro Palaska, to investigate further. In the review they published in the Journal of Biological Regulators & Homeostatic Agents in October 2013, they propose a novel theory for how stress can regulate gum inflammation—a phenomenon whereby the body, in an effort to protect itself from mouth bacteria, essentially attacks its own gums.

The accepted cause of gum disease is this: When people fail to brush adequately, bacteria build up on teeth and gums, eventually leading to decay and disease. And that’s exactly what happens—up to a point, says Papathanasiou. “When bacteria build up, they begin to release toxins. Those are like their weapons,” he says. “Their goal is to create more space so more bacteria can form.” The pockets toxins create in the gums help anaerobic mouth bacteria thrive and cause gingivitis, the early stages of gum disease.

But that’s only half the story. At the same time these bacteria are attacking the teeth and gums, the body is producing immune cells to fight them off. One of the mechanisms for this has to do with mast cells, which studies suggest release proteins into the bloodstream that dilate blood cells and make them more permeable in order to recruit more immune cells for battle.

In a perfect world, immune cells and bacteria are in balance and thus protect teeth and gums. At a certain point, however, immune cells become so numerous that they begin to inflame tissue and hasten disease rather than prevent it—the same way an allergic reaction can cause the body more harm than good. At this point, gingivitis, which is reversible, gives way to bone loss around teeth and full-blown periodontitis, which is not.

“For many years, the theory was that bacteria were mainly responsible, which is why most therapies have targeted bacteria,” says Papathanasiou. “But the more modern concept is that the inflammatory response from the immune cells plays a significant role.” The intensity of this immune response seems to be modified by a number of factors, including genetics, diabetes and smoking.

The researchers’ literature review found that emotional stress was also associated with accelerated periodontal disease, says Papathanasiou. There are two theories about that. The first is behavioral. When people are under emotional stress, they tend to abandon healthy behaviors and eat sugary foods, smoke, drink more alcohol and brush and floss less—all of which promote bacteria growth.

The second, and more surprising, theory is biological. When the body is under stress, it produces more of the hormone cortisol, which usually acts as an anti-inflammatory agent. But when cortisol is produced peripherally in the gums, it seems to stimulate mast cells to produce more proteins, increasing inflammation and therefore increasing the progression of gum disease.

Papathanasiou emphasizes that this biological cause-and-effect has not yet been fully explored in relation to the gums, and that he and Theoharides are developing experiments to test the hypothesis in the lab. That can be complicated, however, because it’s difficult to study the biological effects of stress in isolation from the behaviors people use to cope with stress.

Clinically, the most effective ways to stop the progression of gum disease are regular dental cleanings, excellent oral hygiene and, occasionally, the use of antibiotics, Papathanasiou says. One possibility is to test the antioxidant and anti-inflammatory effects of plant compounds called flavonoids (found in many fruits and vegetables as well as tea) on people experiencing different levels of stress.

“The future of periodontal therapy is not only to target the bacteria, but to try to control the inflammation, too,” says Papathanasiou. “Perhaps we could incorporate these flavonoids into oral hygiene products, like toothpastes or mouthwashes.” While he hastens to say that this could never replace the importance of brushing and regular dental cleanings, these agents could be an important factor in helping to control gum disease.

At the same time, the researchers plan to investigate whether the development of periodontal disease can be mitigated by stress-management techniques. If they are successful, then someday dentists might be prescribing a warm bath and a massage to their patients, along with a recommendation to floss.

This article first appeared in the Spring 2014 issue of Tufts Dental Medicine magazine.

Michael Blanding is a freelance writer in Brookline, Mass.

Sink Your Teeth Into These Facts About Fangs

Using Vapes May Set the Stage for Dental Decay