A Way Out of Germany 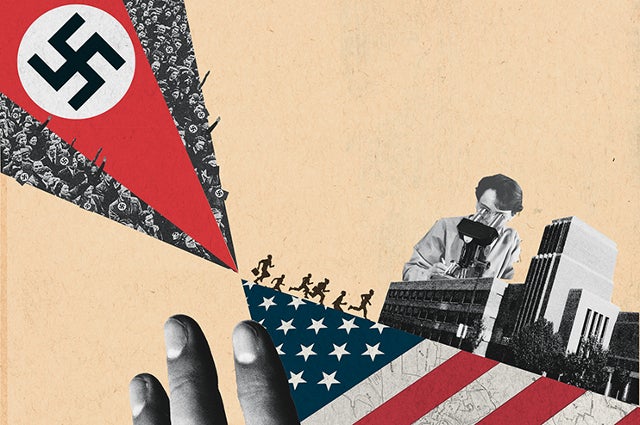 Before the Nazis seized power in the early months of 1933, Germany was at the forefront of science and medicine, and Jewish scientists and physicians, who contributed prominently to that status, seemed secure in their professional careers and, to a large extent, in their personal lives.

As primary targets of Hitler’s onslaught, however, Jews soon found their world and assumptions turned upside down. By April of that year, nearly all were dismissed from academic and civil service positions. Though the magnitude of the coming disaster was still unimaginable even during increasingly harsh persecution of the next several years, many Jews and anti-Nazi non-Jews came to realize that they could not continue to live in Germany. With growing desperation, they sought paths to survival and renewed careers elsewhere.

Two doctors affiliated with Tufts University were determined to help. One of them, Joseph Pratt, was physician-in-chief of the Boston Dispensary, a clinic for the indigent that had joined with the Floating Hospital for Children and Tufts to form the New England Medical Center. The other, Samuel Proger, had come to Boston to study with Pratt and had eventually become physician-in-chief of the Pratt Diagnostic Hospital, an outgrowth of the Dispensary.

Both Pratt and Proger had studied under the eminent internist and physiologist Ludolf von Krehl at the University of Heidelberg, where they witnessed the high quality of German research and clinical medicine. With academic backing from Tufts presidents John Cousens and then Leonard Carmichael, and financial support from the Rockefeller Foundation, they staged what amounted to a rescue operation. They brought 13 refugees, all but two of them Jews, to the Dispensary.

The efforts of Pratt and Proger were not only humane; they were of immeasurable benefit to Tufts’ medical community, since they helped staff the Boston Dispensary with stellar physician-scientists and teachers. Many had already achieved considerable distinction, among them Siegfried Thannhauser, whose vast clinical and research work had helped medical scientists understand gout, diabetes and diseases of fat metabolism; Alfred Hauptmann, who had introduced the use of phenobarbital for treating epilepsy; Martin Nothmann, co-discoverer of Synthalin, the first oral antidiabetic agent; Joseph Igersheimer, the first to perform surgery for retinal detachment and the first to use the arsenic compound arsphenamine to treat syphilitic eye disease; Gerhard Schmidt, who had developed powerful new analytical research techniques using enzymes; and Richard Wagner, who with his mentor, Jakub Parnas, had first described a glycogen storage disease. (See the full list below.)

Thannhauser was among the first of the displaced doctors to be recruited to the Boston Dispensary. His writing brings to life the professional and personal struggles he and many of his émigré colleagues faced. Although his Iron Cross decoration for service in World War I protected him for a year, Thannhauser had been forced to leave his professorship at the University of Freiburg in 1934 after the Nazis issued their list of Jewish doctors to be boycotted. His departure was a wrenching experience, as he recounted in a letter to his former dean at Freiburg in 1946:

“One of those magic early-spring nights as one experiences only in the countryside between the Black Forest and the Kaiserstuhl oscillated in the atmosphere. Nature was ripe for the redemption of spring, but my soul was trampled down and crushed, homeless, ready for eternal sleep. The train which was to bring my family and myself to the boat steamed noisily in the railroad station of Freiburg. Hundreds of schoolchildren surrounded my three daughters; women, among them also wives of my former faculty colleagues, escorted my wife to the train compartment. Only a few men were present. For months they had avoided seeing and greeting me. I was alone. The schoolchildren sang the folk song ‘Muss i denn, muss i denn zum Städtele hinaus?’ (‘Is it true then, is it true then that I have to leave the little town?’) I thought that the world was vanishing beneath my feet. All that I had accomplished, everything that I loved, my marvelous hospital which I had been privileged to build, my friends—all this was lost. I was unable to face myself. I could not even shed tears.”

Joseph Igersheimer, the ophthalmologic pioneer, also felt the sting of being shunned by peers. Before coming to the New England Medical Center and Tufts, he fled Germany to the University of Istanbul, where he headed the Department of Ophthalmology. But at an international meeting in his field, former colleagues from Germany crossed the street when they saw him coming.

At the University of Frankfurt, the biochemist Gerhard Schmidt learned from his colleagues that conversations and innocent actions were being reported to local Nazi party cells. Then, in February 1933, all members of the medical faculty were ordered to attend an assembly where a Nazi official gave a long harangue on the need to eradicate “Jewish science” root and stem. For the faculty, which included eminent Jewish doctors, it was, Schmidt recalled, “a moment of historic humiliation.”

The next month, he was dismissed from his post and fled to Italy. He arrived at the Boston Dispensary seven years later, after a series of short-term fellowships that took him to Naples, Stockholm and Florence, as well as Kingston, Ontario, and the Rockefeller Institute in New York and Washington University in St. Louis.

Alfred Hauptmann, the neurologist who first treated epilepsy with phenobarbital, was progressively marginalized in German medical circles as well, even though he’d converted to Christianity years earlier and, like Thannhauser, had been a decorated soldier in World War I. As he wrote to a former mentor, “Some sort of ocean separates me from the others.” Still, he loved Germany and decided to stay.

In 1935, with the passage of the Nuremberg Race Laws, which decreed that Jews could no longer be German citizens, Hauptmann was dismissed from the University of Halle, where he had been chair of the Department of Psychiatry and Nervous Diseases. In 1937 he was stripped of his membership in the Leopoldina, the German Academy of Sciences, as a “non-Aryan element.” With no work, he moved to Freiburg, the home of his Jewish wife. “I have no one else here,” he lamented, “and others simply do not have the courage to be with me.”

Hauptmann was finally arrested on Kristallnacht, the Nazi government’s anti-Jewish pogrom carried out on the night of November 9, 1938. He was interned at Dachau, and when he was released a few weeks later, it was with the understanding that he would depart the country. Also arrested in 1938 was Martin Nothmann, the co-discoverer of the first oral antidiabetic agent. He was held in the Buchenwald camp and released on the condition that he leave Germany for a teaching position in Holland. He complied, and later made his way to the Boston Dispensary.

Once at the dispensary, the émigrés faced the difficult labor of rebuilding a professional life in a new land, a new culture, a new language. Thannhauser remembered his sharp break with the past.

“It was clear to me from the first hour that I must forget the position in Europe which I attained as a result of my 50 years of work. I drew a line under my past and started anew. Otherwise I would have lived in memories of the past and been unable to start a new productive existence. It was strenuous, very strenuous, at my age to establish myself once more as a scientist and researcher.”

The lecturing in English, the complexities of setting up a new laboratory and the constant interaction with unfamiliar people from different backgrounds all wore on him. Yet he cherished the support he received. “My American friends, particularly my senior at the hospital, Dr. Joseph H. Pratt, . . . were so helpful and brotherly toward my family and myself during this time of hardship that I came to feel at home in this new city,” he said. And he saw Boston, with its abundance of research hospitals, as “an Athens of the medical world,” a place where it was possible “to learn many new things and to revise old and deeply rooted conceptions.”

So Thannhauser continued developing as a doctor and scientist. Most of the other refugees at the Boston Dispensary, confronted with similar obstacles, did the same. Even Hauptmann, who never recovered emotionally from the separation from his homeland and could not regain the level of his earlier achievement, moved forward. He collaborated with Thannhauser to describe a form of muscular dystrophy in 1941; it is still known as Hauptmann-Thannhauser muscular dystrophy.

After the war, some of the émigré physicians were invited to return to Germany, as devastated university faculties strove to rebuild, and perhaps to repent. In 1954, the University of Breslau named Nothmann professor, though he remained in the United States. Other expatriates were offered honorary positions or showered with accolades.

The University of Freiburg granted Berta Ottenstein, a German Jewish dermatologist at the Dispensary, an honorary professorship in 1951, the same year she became a U.S. citizen, and in 2005 the school established an Ottenstein Prize to recognize women in science and medicine. Every two years since 1979, European societies for epilepsy have awarded an Alfred Hauptmann Prize in Bonn for epilepsy research.

But some of the doctors would never set foot on German soil again. Thannhauser may have spoken for them when, in his 1946 letter to the University of Freiburg, he categorically refused an offer to resume his professorship there. He wrote, “I cannot return; the wound is too deep; it will never heal. The disappointment of my faith in the good of German men, in the honesty of my friends, was too great.” His loyalties now lay elsewhere: “The years in which I am still able to work productively belong to this country which sheltered and advanced me at the time of my deepest anguish.”

Indeed, Thannhauser and the 12 other refugee physician-scientists did work productively, to lasting effect, at Tufts Medical Center and Tufts School of Medicine. Their contributions are a testament to the initiative of Pratt and Proger, and these many years later, legions of students, patients and colleagues still benefit.

Heinrich Brugsch. Headed the arthritis clinic and the rehabilitation department of the New England Medical Center.

Alice Ettinger. Became a pioneer in tomography, a gold medalist of two U.S. radiological societies and the first chair of the Department of Radiology at Tufts School of Medicine (see “The Great Professors”).

Alfred Hauptmann. In Germany introduced phenobarbital for treating epilepsy; in Boston collaborated with Siegfried Thannhauser to describe a form of muscular dystrophy.

Martin Nothmann. In Germany co-discovered Synthalin, the first oral antidiabetic agent; in Boston served on the Tufts faculty for thirty-nine years and published numerous papers with Pratt and Proger on metabolic diseases.

Berta Ottenstein. In Germany headed a dermatology clinic at the University of Freiburg; in Boston published papers with Gerhard Schmidt on cell membrane components.

Anna Reinauer. Served on the clinical staff of the Boston Dispensary and later established a practice in Brookline.

Gerhard Schmidt. In Germany developed powerful new analytical research techniques using enzymes; in Boston became director of the Dispensary’s biochemistry laboratory and was elected to the National Academy of Sciences.

Siegfried Thannhauser. In Germany was head of medicine at the University of Freiburg; in Boston established a laboratory at the Dispensary and became a professor at Tufts.

Richard Wagner. In Germany was one of the first to describe a glycogen storage disease; in Boston assisted the physician-in-chief of Tufts’ Floating Hospital for Children.

This article first appeared in the Winter 2014 issue of Tufts Magazine.

B. David Stollar, M.D., is a professor emeritus at the Tufts University School of Medicine. He chaired the Department of Biochemistry from 1986 to 2001 and was dean ad interim of the Sackler School of Graduate Biomedical Sciences from 2002 to 2004. His book on the émigré physician Gerhard Schmidt is due out this year.