Coding in the Playroom

With a new toy based on research at Tufts, kids use wooden blocks to program a robot 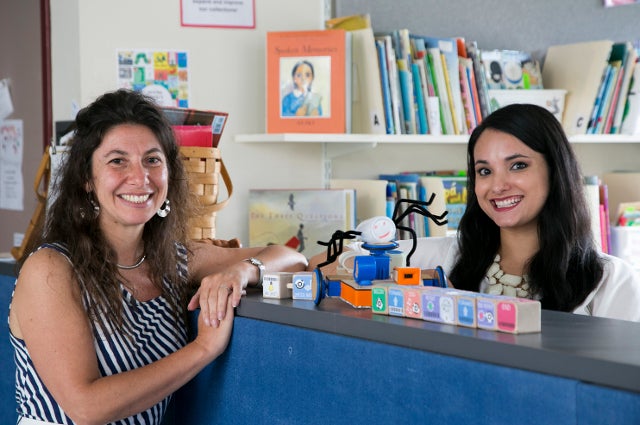 Put your hands under an automatic faucet and the water flows; push a numbered button in an elevator, and it takes you to that floor. Young children see technology in action every day, says Marina Umaschi Bers, who studies innovative learning technologies for children. But understanding how it works is something entirely different.

To promote that deeper level of knowledge, Bers and dozens of Tufts students have worked for the last eight years to develop a small robot that children ages 4 to 7 can program themselves using wooden blocks; the kids have fun while putting logic and problem-solving concepts into practice.

When Bers began presenting her prototype robot to teachers and parents a few years ago, invariably people would ask how to buy one. She had nothing to offer. “I would have to tell them they can’t buy one because it’s a research project,” she says. “I started feeling like a fake. What am I doing with this research and grant money if I can’t make [the robots] available?”

Bers, a professor in the Eliot-Pearson Department of Child Study and Human Development and an adjunct professor in the Department of Computer Science at Tufts, is in the business of promoting children’s positive development, but she is not a businessperson. Enter Mitch Rosenberg, an engineer and veteran executive of several start-up robotic companies. The two have formed KinderLab Robotics Inc., which will manufacture the KIBO, a robot kit they will sell to parents and schools through a license from Tufts.

They launched a Kickstarter campaign to raise money to produce the kits, and have already reached their initial goal of $50,000. Their new goal is to raise $65,000 by June 29 so they can create a KIBO project guide; if the campaign garners $80,000, they will start a fund to supply kits to schools that couldn’t otherwise afford them.

It’s important for young children to learn about technology before they develop preconceived notions about who is good at science, technology, engineering and math, Bers says. Research shows that women and minorities often dismiss careers in technical fields at a very young age. “By fourth grade, stereotypes are already formed,” she says. “You have to start early before they have preconceptions.”

The KIBO robot is a square-shaped platform on two wheels with small motors on the sides. Turn the platform over and you see the inner workings of a circuit board, wires and batteries through a clear base. Sensors in blocks mounted on top detect sound, location and light. 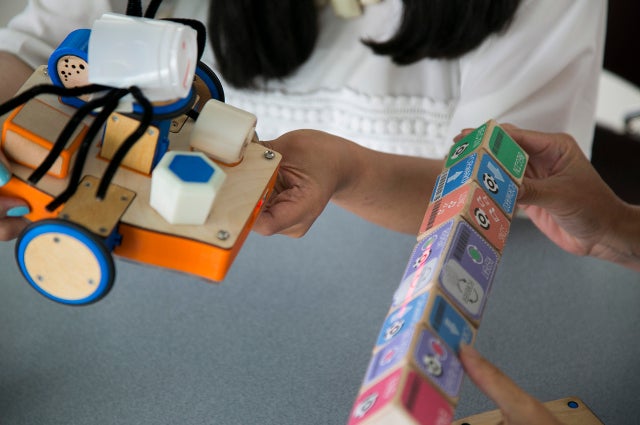 The robot’s scanner reads the bar code directions on the wooden blocks. Photo: Kelvin Ma
The robot features a bar code reader, just like the ones in stores, that scans small wooden blocks that come with the robot. Each block contains a command for the robot: begin, end, move right, move left, shake, repeat. Children run the scanner over the bar codes to create a program that directs the robot. A clap of the hands starts the program moving the robot; tell it to stop with a vocal command and it will. The prototypes were created with the input of undergraduate and graduate students from Eliot-Pearson and the Department of Computer Science in the School of Engineering, with grants from the National Science Foundation.

Hundreds of children at schools in Somerville, East Boston, Newton and Watertown, Mass., and Harlem, N.Y., as well as at day camps and after-school programs have tested out the KIBO robot. Bers and her students incorporated their feedback to make design modifications, such as making the bottom of the robot see-through—the kids wanted to be able to look inside.

“Our project allows children to understand sensors and motors and programming, things they find in the world,” says Bers. “It’s not that we want everyone to be an engineer, but learning how to code allows you to think in more systematic ways and to engage in problem solving. Learning about sequencing can be helpful for literacy and math, as can understanding cause and effect.”

In the video above, Marina Bers talks about the KIBO robot.

And they learn how to figure things out when something goes awry, says Amanda Sullivan, a doctoral student at Eliot-Pearson who has been involved in the project from the beginning. If the robot doesn’t do what the child wants, she has to determine whether she put in the wrong instructions or set up the sensor module or motors properly, Sullivan says.

Bers says she specifically did not incorporate computer displays in the robot—children already look at enough screens. In addition, teachers told her that requiring computers would be problematic because most early childhood classrooms wouldn’t have enough of them.

Bers is pleased she will finally have something to offer the many people who asked, How can I get one of these? She is accepting orders now, and the robots will available starting in September. “At Eliot-Pearson, we talk about the integration of research and practice. You do research and bring it back so other people can use it,” she says. “People in the real world aren’t going to read my research papers, so for me and my students, this is very fulfilling.”