Research indicates a parallel between bee hives and humans 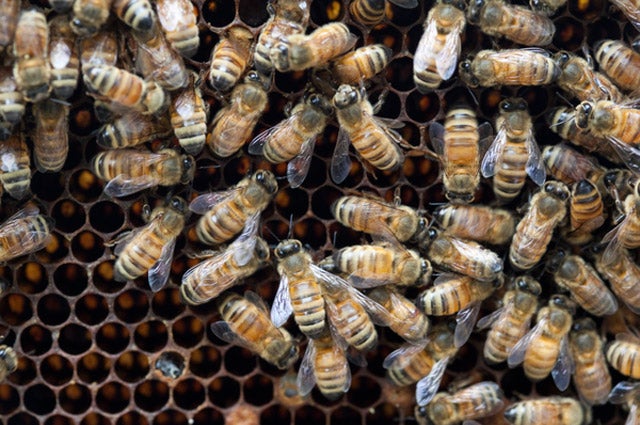 MEDFORD/SOMERVILLE, Mass. – Honey bees, especially the young, are highly sensitive to temperature and to protect developing bees, adults work together to maintain temperatures within a narrow range. Recently published research led by Philip T. Starks, a biologist at Tufts University’s School of Arts and Sciences, is the first to show that worker bees dissipate excess heat within a hive in process similar to how humans and other mammals cool themselves through their blood vessels and skin.

"This study shows how workers effectively dissipate the heat absorbed via heat-shielding, a mechanism used to thwart localized heat stressors," says Starks. The research is published in the June 10 edition of the journal Naturwissenschaften, which appeared online April 24.

This discovery also supports the theoretical construct of the bee hive as a superorganism—an entity in which its many members carry out specialized and vital functions to keep the whole functioning as a unit.

Previous research has shown that workers bees, among other duties, control the thermostat essential to the hive's survival.

When temperatures dip, worker bees create heat by contracting their thoracic muscles, similar to shivering in mammals. To protect the vulnerable brood when it's hot, workers fan the comb, spread fluid to induce evaporative cooling, or – when the heat stress is localized - absorb heat by pressing themselves against the brood nest wall (a behavior known as heat-shielding).

But until the Tufts study, scientists did not know how the bees got rid of the heat after they had absorbed it.

Each colony numbered 1,000 to 2,500 adult bees. An eighth hive, empty of bees, was used as a control. Using a theater light, the researchers raised the internal temperature of all eight hives for 15 minutes. Temperature probes recorded internal temperature throughout the heating portion of the experiment.

As anticipated, the worker bees pressed their bodies against the heated surfaces near the brood. Like insect sponges, they absorbed the heat, which lowered temperatures. After 15 minutes, a time brief enough to prevent serious harm to the bees, the theater light was turned off.

Immediately following, heat movement within the hive and external hive temperatures were tracked via thermal imaging. Within 10 minutes of cooling, temperatures in the active hives were down to safe levels. Meanwhile, the control hive remained at 40 degrees Celsius. "Since the control hive did not have bees, the differences in temperature were likely caused by worker behavior," Starks says. 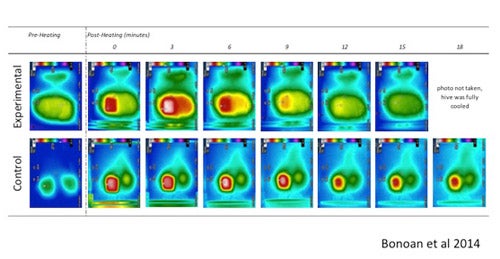 These thermal images show the presence of heat during this experiment. The color green indicates the presence of bees in the experimental hive. Red and white areas indicate temperatures above 37 degrees Celsius.

Using thermal imaging, the scientists observed that temperatures increased peripheral to the heated regions of the hive as the brood nest began to cool. The thermal images clearly showed that the bees had physically moved the absorbed heat in their bodies to previously cooler areas of the hive. "Moving heat from hot to cool areas is reminiscent of the bioheat transfer via the cardiovascular system of mammals," says Starks.

Tufts University, located on three Massachusetts campuses in Boston, Medford/Somerville, and Grafton, and in Talloires, France, is recognized among the premier research universities in the United States. Tufts enjoys a global reputation for academic excellence and for the preparation of students as leaders in a wide range of professions. A growing number of innovative teaching and research initiatives span all Tufts campuses, and collaboration among the faculty and students in the undergraduate, graduate, and professional programs across the university's schools is widely encouraged.