How can I control my appetite?

James M. Greenblatt, an assistant clinical professor of psychiatry at the Tufts School of Medicine and author of "Answers to Appetite Control," offers his advice

Traditional treatment approaches for weight management and binge eating have failed, because our culture and beliefs about food have prevented us from recognizing the biochemistry at the foundation of disordered eating. Food addictions cannot be resolved by willpower alone. It is only by understanding the complex physiological phenomenon of appetite and the genetic, emotional and nutritional factors controlling it that a solution becomes possible.

At a basic level, the consumption of sufficient food for energy metabolism is essential to the survival of all species in the animal kingdom. However, mammalian brains have evolved several interrelated neural and biochemical systems that also drive feeding behaviors. For humans, the most potent drive for eating is often its rewarding nature. Chemicals in the brain produce a powerful rush of pleasure in response to certain foods—or even the thought of them. We are no longer eating to survive; we are eating to elicit a feeling of happiness and satisfaction. 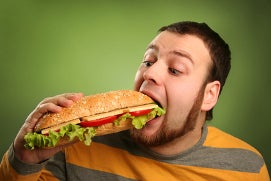 Food addictions cannot be resolved by willpower alone. Photo: Depositphotos
Research has confirmed that our distinct physical and emotional reactions to food are strongly influenced by three molecular structures in the body: peptides, hormones and neurotransmitters. When these regulator molecules are in balance, we are able to identify when we are hungry and eat only until satisfied. Properly functioning neurobiological pathways allow hunger cues to be natural and appropriate, eating patterns to be synchronized and cravings to remain generally under control. However, to sustain this balance, the body requires adequate amounts of raw material in the form of small organic compounds called amino acids.

Amino acids are the simple protein building blocks that combine to form more than 50,000 complex peptides, hormones and neurotransmitters in our bodies. Despite the many functions that the amino acids perform, there are only 20 varieties of them, and they are classified as either “essential” or “nonessential.” The liver manufactures 11 of the 20, while the remaining nine must be obtained through protein-rich foods in the diet.

Each amino acid influences food addiction in a specific way—primarily through the modulation of peptides, neurotransmitters and hormones. Tryptophan, for example, which is found in turkey and chicken and some fruits and vegetables, is the precursor to serotonin, a neurotransmitter that affects mood and provides a feeling of satiation. Phenylalanine, an amino acid found in meat, fish, eggs, cheese and milk, influences hunger-regulating neurotransmitter dopamine levels. Other peptides and amino acids impact appetite directly via their roles in the metabolism of glucose, a kind of sugar, and protein synthesis.

Without a sufficient supply of dietary amino acids for the production of peptides, hormones and neurotransmitters falter, and appetite can quickly spiral out of control. Unfortunately, amino acid deficiencies are surprisingly common, and many people struggle with low levels of them without realizing it. Several factors can contribute to an amino acid deficiency, including diets too low in protein (particularly vegan diets), poor digestion of protein, antacid use and stress. The good news is that digestive enzymes and amino acid supplementation can help.

When taken properly, amino acids can help to recalibrate the underlying biochemical imbalances that cause cravings, skew appetite and exacerbate destructive eating patterns. Using amino acids is not a new medical breakthrough. The solution is logical, commonsensical and easy. If a nutritional deficiency causes a problem, then supplementing the body with what it has been missing can solve it.

Contrary to what many diet books and some reports in the media lead us to believe, the basis of an appetite gone wild is not laziness or lack of self-control. Many people will experience a dramatic decline in cravings and the desire to binge when protein intake is optimized and digestion enhanced with enzymes and amino acid supplements. By using such integrative approaches that are based on the underlying neurobiology of appetite, it becomes much easier for individuals to achieve a healthy relationship with food.

With concerns about mercury poisoning, is it safe to give canned tuna to cats as a treat?