As the deadly disease attacks West Africa, a Tufts expert in the virus explains its origins and ecology and the best ways to fight its spread 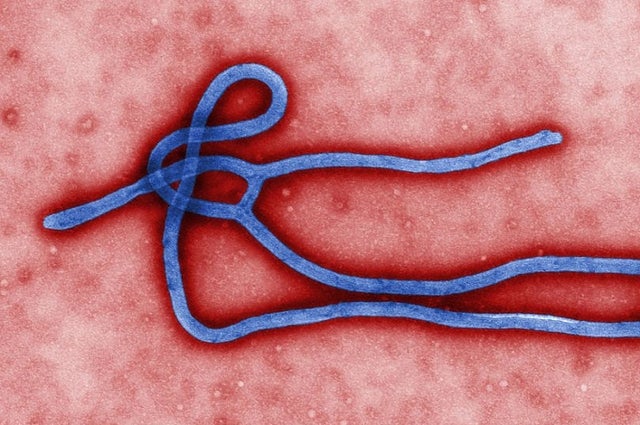 The latest outbreak of Ebola, a fast-moving, often lethal viral disease, in West Africa has drawn renewed attention to the virus and others like it that leap from wild animals to humans.

Veterinarian and epidemiologist Jonathan Epstein, V02, MPH02, studies Ebola, Nipah virus, severe acute respiratory syndrome (SARS), Middle East respiratory syndrome (MERS) and other so-called zoonotic diseases (those transmitted by animals) that have emerged in Asia and Africa. He is associate vice president of conservation medicine at EcoHealth Alliance, a New York-based organization of scientists focused on the relationships between wildlife, ecosystems and human health. An assistant clinical professor of public health and community medicine at Tufts School of Medicine, he received an M.P.H. from the school in 2002. He is a contributing faculty member to the master of science in conservation medicine program at Cummings School, from which he received his D.V.M.

Epstein spoke with Tufts Now about the origins of the Ebola virus and why it has taken hold in West Africa, where it had killed at least 961 people as of Aug. 6, making it the worst Ebola outbreak in history, according to the World Health Organization, which declared it an international public health emergency.

Tufts Now: Ebola has periodically flared up and died out quickly since it was first identified in 1976 in Sudan and Congo. What causes each new outbreak?

Jonathan Epstein: The current scientific evidence suggests that Ebola virus is carried by fruit bats, which can be infected with it without ever having symptoms or developing severe disease. People and other animals catch Ebola when they are exposed to an infected bat’s bodily fluids, either directly or indirectly via another infected species.

For example, a piece of fruit half-eaten by an infected bat in the forest canopy may drop to the forest floor. All it takes to infect a new species is for another animal to come along and eat that piece of fruit contaminated with Ebola-ridden bat saliva. That’s one hypothesis. Another is that because fruit bats roost in trees, it’s possible for other forest dwellers’ food to be contaminated by bat droppings. If a colony of bats is defecating and urinating in a particular place and another animal eats vegetation off that part of the forest floor, it could be exposed that way.

Most of our past experiences with Ebola outbreaks in Africa have been in Democratic Republic of the Congo, Congo, Gabon and Uganda. Many of these outbreaks have been linked to people eating great apes as “bush meat,” either by hunting the animals or finding a dead gorilla or chimp (that died from Ebola) and bringing it back to a village. Primates and other animals are also susceptible to infection with Ebola virus, and both animals and people can remain infectious for a period of time after death.

What led to this current outbreak?

“Usually, it’s human activities that alter our environment and unintentionally bring us and our livestock into closer contact with bats, which fuels the spillover of disease,” says Jonathan Epstein.
There aren’t gorillas in West Africa, where the current Ebola outbreak is happening, and there hasn’t been any specific evidence of a link to animals, other than speculation that people were initially infected by bats. In this part of West Africa, people do hunt and eat fruit bats. Two of the species described as being commonly hunted in Guinea, where this outbreak is believed to have started, have been associated with Ebola virus in Central Africa.

So although there is no epidemiologic study as of yet that definitively links this particular outbreak to disease spillover from butchering bats, it’s a pretty reasonable speculation. However, in order to assess the risk of additional spillovers occurring, it’s important for us to determine whether bats in the region really do carry Ebola virus, and if so, which species. Furthermore, if animals other than bats are involved in human transmission, then this becomes important in terms of what message to give people in order to reduce their risk of infection.

It may not be sufficient to simply avoid hunting bats. People may need to avoid butchering other animals as well—particularly an animal that has already died. While it is unreasonable to expect them to simply stop hunting wildlife when there is no alternative food resource, there may be simple things that can be done to reduce the risk of infection, such as avoiding eating carcasses and washing one’s hands immediately after handling or butchering an animal.

Why is the Ebola virus so virulent in humans?

If you are a virus and your primary goal in life is to reproduce and spread, it’s really not in your best interest to kill your host quickly. That would be counterproductive. Many viruses that originate in wild animals have been circulating for a long time and have had a long time to evolve toward less virulence, causing less disease in that particular animal.

But when these viruses spill over into a new host, such as a gorilla, a duiker [a small antelope] or a human, whose immune system has never seen the virus before, you see severe disease.

How have people caught the disease?

In the case of Ebola, people get infected through direct contact with the bodily fluids of an animal or person who is sick. The majority of cases are due to human-to-human transmission where people are having close contact with sick friends or relatives, or even the bodies of those who have died from Ebola. Ebola can remain infectious for a period of time after death. This is problematic in the context of the current outbreak, as traditional funeral practices involve intimate contact with the deceased via bathing or hugging and kissing the body, and this has been a common mode of transmission.

What makes this Ebola outbreak so much worse than ones in the past?

The major factor is social dynamics. This outbreak, like most Ebola outbreaks, began in a small village. It was in the southern part of Guinea. As far as we know this is the first time Ebola has appeared in West Africa, which means people have no experience with Ebola virus disease. As a result, this has created a lot of fear. These rural people didn’t understand what was going on, and many attributed the deaths of their loved ones to supernatural causes.

As Ebola spread, many people fled to other villages—in some cases, across totally open national borders to Liberia and Sierra Leone—seeking medical treatment or simply trying to escape this curse from the gods. By the time public health systems caught on to what was happening, they were dealing with localized outbreaks in three different countries through three different national health systems—all of which were insufficient to handle the disease, especially as the outbreaks grew.

Another component of this outbreak that makes it so bad is that it has spread to Conakry, Guinea’s capital and home to millions of people. We’ve previously seen Ebola only in remote villages where there are maybe a few hundred people total among the few villages nearby, which means that an outbreak could be more easily contained and would not spread as easily due to the size and isolation of the villages.

Fear and misunderstanding are the other factors that have greatly contributed to turning this outbreak into an epidemic. There’s a widespread lack of understanding of how people get infected with the disease, which is through direct contact with bodily fluids from a living or recently deceased infected person or animal. There’s also a general disbelief that Ebola virus is a real disease that can be fought with hygienic precautions versus something supernatural that’s out of everyone’s control.

How does the local ecology determine the paths that Ebola and similar zoonotic diseases take?

Usually, it’s human activities that alter our environment and unintentionally bring us and our livestock into closer contact with bats, which fuels the spillover of disease. For example, in the case of the first known outbreak of Nipah, a typically fatal disease carried by the giant flying fox variety of fruit bat, there were fruit orchards at a Malaysian farm where mango trees were planted right next to pig enclosures. Mangoes are a favorite food of the flying fox bat, and the fruit trees attracted them to the farm. As the fruit bats dropped pieces of fruit covered in saliva that had Nipah virus in them, pigs would wander over and eat the mangoes off the ground. It was an artificial interface created by people. Normally, the bats would have foraged for figs and flowers in the jungle, far away from the pigs.

Almost all emerging zoonotic diseases are caused by situations humans have created. We need to think about how we develop land, including agricultural expansion, urbanization and deforestation. As human populations grow, there will be increased demand for protein from food animals and farming will expand. We need to realize that the closer we put ourselves into contact with wildlife, the more opportunity there is for a disease that used to exist solely in wildlife to spill over to other animals and people.

Everyone is very focused, and rightfully so, on containing this outbreak and limiting human morbidity and mortality. But it’s also really important to ask, How did this happen in the first place? After all, it’s infinitely more cost-effective to prevent a disease like Ebola from emerging than to try to control it once it does. The last thing you want is to go through this again in Nigeria or Togo or another neighboring country with a similar environment and ecosystem.

What is it about bats and human viruses?

It’s something I think about a lot. I’ve been working with bats and viruses for 12 years now. In the beginning, my focus was on the Nipah virus, but it seems like a new virus or group of viruses is always being linked to bats: SARS, MERS and Ebola. There’s even a bat virus I discovered that appears to be ancestral to Hepatitis C; it’s now thought that perhaps the hepatitis viruses are all descended from these bat viruses.

What is it about bats? Well, if you look to natural history, it turns out that bats are part of a very ancient order of mammals. They’ve been around a really long time and presumably so, too, have their viruses. Over time, some of these bat viruses have made the leap into other animals and people and have evolved into some of our viruses like mumps, rubella and probably even measles.

Do bats or other wildlife suffer from backlash when they are fingered as the culprit for disease spillover?

Definitely, and bats already have a terrible reputation from both mythology and misconceptions as being vampires or, at the very least, frightening creatures of the night. But they are incredibly important ecologically. Bats are responsible for about half of the world’s rain forest in terms of pollination and seed dispersal.

This is why it’s really important to have conservation-minded veterinarians involved in disease surveillance and response. We need people who are thinking about conservation and ecology as much as they are about public health to get the message out that these diseases do not emerge because of any malicious intent or behavior from wildlife. All animals, including people, have their suite of viruses and bacteria that are normal to them. Eliminating bats is not the right approach to controlling or preventing these diseases. It’s not even practical.