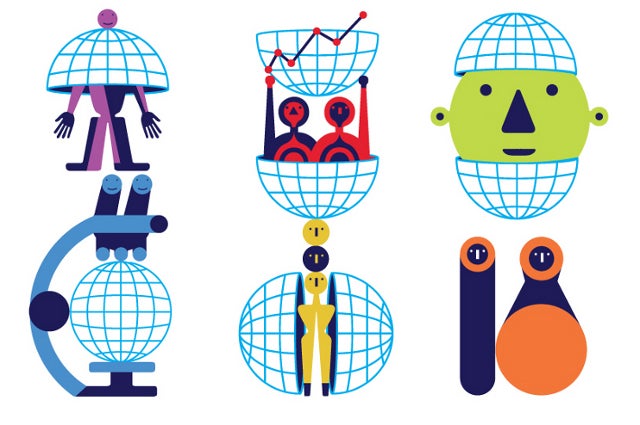 Four research teams at Tufts have set out to solve some daunting public health problems caused by bacteria, viruses and other microbes that inhabit our bodies and the environment. The goal is to develop new vaccines, quicker ways of detecting disease and other discoveries that will improve people’s lives.

The research will be done under the auspices of a new university-wide venture, the Tufts Institute for Innovation (TII), which will launch officially on Aug. 28 in new laboratories on the Boston campus.

With seed funding from TII, the research teams will seek to develop a surveillance system for detecting waterborne infectious disease; vaccines to stop the spread of Lyme disease and another infection, Clostridium difficile, which kills nearly 30,000 people in the United States alone each year; and a test to diagnose tuberculosis within minutes. The projects address TII’s inaugural research theme, “Microbes: Improving the Environment and the Human Condition.”

What distinguishes TII from similar research centers, says Tufts President Anthony P. Monaco, is that “from the outset, findings in the laboratory will be tightly and deliberately coupled with strategies for implementing them to achieve significant impact in specific populations and communities around the world.

“TII is a university-wide commitment to science for social good,” he says.

To ensure that discoveries get to those who need them most, each TII research team will seek to recruit other Tufts faculty who can help surmount the political, cultural, regulatory, infrastructure and economic barriers that can hinder even the most successful scientific breakthroughs from having significance beyond the laboratory.

“When you have an outcome that really addresses a problem, you realize it’s not just about the science or the technology,” says David R. Walt, a University Professor and TII’s founding director. “It’s about actually understanding the problem and getting the right people in the room who have experience in those areas. They can help you at the very beginning craft the work in a way that is poised for success.”

The institute is a major initiative of the university’s strategic plan, Tufts: the Next 10 Years (T10), which was adopted in 2013. “TII is an important new component of our research and scholarship portfolio at Tufts,” says Provost David Harris.

“With our expertise in human and animal models of disease, international business and policy, engineering, the environment, the humanities and humanitarian issues, and geopolitical contexts and challenges, Tufts is uniquely positioned to produce discoveries that improve the human condition,” Monaco says. Both undergraduate and graduate students also will be involved in the work of TII, he says.

To support the start-up of TII, Monaco has allocated funds that were bequeathed to the university; he intends to make the institute a priority in Tufts’ next capital campaign.

The institute is governed by two committees: an Executive Committee that includes seven faculty members from across the university, Vice Provost for Research Diane Souvaine and Walt, and a Steering Committee of 25 faculty members representing each of the schools.

A third group, an External Advisory Board, will serve as outside advisors to TII. Thus far, Don Ingber, a professor of bioengineering at Harvard School of Engineering and founding director of the Wyss Institute for Biologically Inspired Engineering at Harvard, and Stephen Kresovich, chair of genomics in the Department of Biology at the University of South Carolina, have agreed to serve for the next three years in this capacity. “These two individuals have helped envision TII’s potential from an early stage and are invested in its success,” Walt says.

Following a review by the Executive Committee and external peer reviewers, four projects were chosen to receive inaugural TII funding:

— A team led by Elena Naumova (civil and environmental engineering and public health and community medicine) and Kurt Pennell (civil and environmental engineering) seeks to reduce the public health burden of waterborne infectious diseases in Ghana and India. They are collaborating with colleagues from Christian Medical College in Vellore, India, and the Noguchi Memorial Institute for Medical Research at the University of Ghana, Legon.

— Sam Telford (infectious disease and global health) and his group are developing an oral vaccine to reduce the prevalence of the microbe in mice that causes Lyme disease. Their goal is to reduce transmission of the Lyme-causing bacterium to humans.

— Xingmin Sun (infectious disease and global health) and his team are working on a vaccine against a stubborn hospital-acquired infection, Clostridium difficile. They’re targeting those at highest risk for infection, including the elderly and patients with weakened immune systems.

— Gillian Beamer (infectious disease and global health) and her research team are developing a nearly instantaneous diagnostic test for tuberculosis. The project is addressing the limitations of existing tests, including heat stability, portability and rapid results.

Walt said that 14 research projects from across Tufts were submitted after a request for proposals was issued in early January. The TII Executive Committee reviewed the proposals initially to determine their relevance to the microbe theme, the level of cross-university collaboration and how potential discoveries would be implemented to improve health and well-being. Four project plans then were sent on to external reviewers who specialize in these research areas.

“There is already great innovation and collaboration going on at Tufts, but it’s the bigger, more-inclusive tent that brings in a wide range of topics and expertise that distinguishes TII,” says Jonathan Garlick, a member of TII’s Executive Committee and director of the Division of Cancer Biology and Tissue Engineering at Tufts School of Dental Medicine.

Having a targeted research theme around the public health implications of microbes also sets TII apart from other research centers that pursue multiple topics of inquiry, Walt says.

Viruses, bacteria and other microbes are universal organisms that can do good or cause harm. Some help prevent or cure severe gastrointestinal disorders, for example, while others cause infectious diseases such as HIV/AIDS, tuberculosis and malaria.

“Infectious agents are still the primary cause of disease,” says Nick Frank, a member of the TII Executive Committee who chairs the Department of Clinical Sciences at Cummings School of Veterinary Medicine. “It’s an area where there’s still a lot of work to be done. With advances in technology and our understanding of these microbes, you can take advantage of situations where microbes are helpful and also find ways of preventing diseases that are caused by them.”

While TII work will be conducted on all three campuses, the institute’s base is in 5,000 square feet of newly renovated laboratory, office and meeting space on the fourth floor of the M&V Wing of the Biomedical Research & Public Health Building. The TII research teams will be able to tap into the resources of the Department of Molecular Biology and Microbiology next door in the Jaharis Center, the new Arnold 8 biosafety laboratory upstairs that was built to advance research in infectious diseases and Boston’s world-class hospitals.

With first-year seed funding and incubator lab space on the health sciences campus, the research teams will be expected to position themselves to seek funding from external sources to complete their work. The TII model is designed to make Tufts more competitive in seeking such funding. In an era of tight federal resources, funding agencies typically want a grant application to contain preliminary results produced by highly cross-disciplinary teams, Walt says.

The teams eventually will transition out of the TII laboratory and into the field as their projects move toward full implementation. In the future, additional thematic areas of research will be developed, and other Tufts faculty will be invited to submit proposals that support those areas.

“TII is an opportunity for the university not only to ramp up its research profile, but also to secure some different kinds of funding than we have before,” Walt says.

Many of the TII research projects will have both social and commercial value, says Lauren Linton, who joined Tufts in July as TII’s deputy director. Linton led the most productive team on the Human Genome Project when she served as co-director, with Eric Lander, of the Sequencing Center at the Whitehead Institute and as associate director of the Center for Genome Research at Whitehead/MIT. In addition, she has founded, worked for and consulted for companies in the pharmaceutical/biotechnology industry in drug development, marketing and application development, strategic planning and business management.

“TII is designed to foster continuous waves of discovery and entrepreneurship,” says Linton, who holds a Ph.D. in biological sciences from Stanford University.

Future projects might engineer microbes for cleaning up oil spills or harvesting carbon out of the air, says TII Executive Committee member John Leong, professor and chair of the Department of Molecular Biology and Microbiology. Bacteria might be harnessed to pump out new kinds of chemicals that could be used as medications or have new industrial applications, he says.

TII will be able to solve problems in fields such as medicine, engineering, the environment and public health because it fuses strengths across disciplines, Leong says. “When you’re working within your field, everyone is essentially digging for a well in the same area,” he says. “Not many people can be an engineer and a microbiologist. So if you can dig in the areas that fall in between, things will start opening up.”

Jacqueline Mitchell can be reached at jacqueline.mitchell@ tufts.edu.