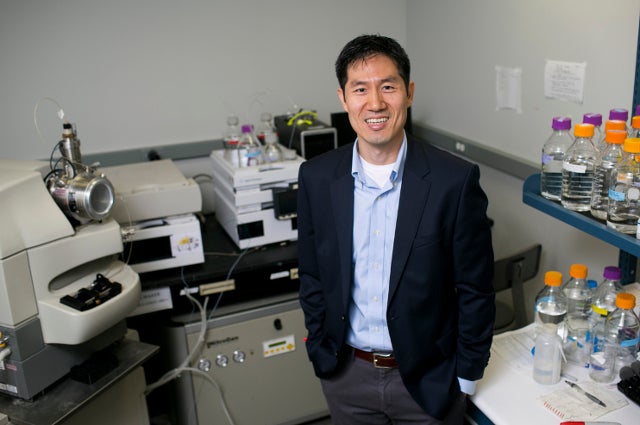 The word metabolism gets tossed around a lot, but it means much more than whether you can go back to the buffet for seconds without worrying about your waistline. In fact, metabolism is the set of biochemical processes by which cells turn food into energy, biological building blocks and—inevitably—waste products. Every living cell does it, but not every cell does it in the same way.

Among his many projects, Kyongbum Lee, chair and associate professor in the Department of Chemical and Biological Engineering, studies these complex cellular reactions and the role they play in the body. His goal is to be able to coax cells’ metabolic processes so they produce things the body needs or detect disease in its earliest stages.

These days, Lee and his colleagues are busy identifying the chemicals produced when the bacteria that live in mammals’ guts metabolize food. In addition to cataloging those chemicals, called metabolites, the researchers are testing them one by one to determine their impact on the body. Can the products produced by bugs in your gut affect your health? Your weight? Your mental health? Tufts Now talked to Lee to see what his findings have shown so far.

Tufts Now: What does your lab do?

Kyongbum Lee: In one of our projects, we’re looking at the interaction between mammals and the chemicals produced by the microbes that reside in their digestive tract. There are microbes everywhere on our bodies, but we’re primarily focused on the microbes in the gut.

While other labs are looking at the composition of the collection of microbes known as the microbiome—and which species of bacteria are present and in what numbers—we are looking at the metabolites, the compounds they produce as they metabolize food. We are first interested in what these chemicals are. How can we differentiate between the chemicals derived from bacterial metabolism versus the chemicals we mammals make as we metabolize the food we eat? The follow-up questions are, What do the chemicals do? And which species or strains of bacteria are responsible for producing these chemicals?

Do scientists know any of these chemicals’ functions?

It’s already well known that there are certain complex sugars our bodies cannot metabolize on their own. Instead, they are broken down and fermented by the microbes. The resulting small molecules are then used as fuel by the cells that line our intestines.

That’s one well-defined function of a microbial metabolite, but that’s only scratching the surface. Depending on the individual, there could be several hundred to several thousand different species of bacteria present. So there’s a huge range of chemical products they could be making.

Right now, we are looking at chemicals that we think have an impact on systemic inflammation. We are screening about 50 metabolites. You have to start somewhere, so we look at them one at a time.

What can you do with that information?

Once we identify the range of products that normally occur in a healthy animal, we can start to ask how they would change if the animal had disease or was subjected to a change in diet. And this is the ultimate chicken-and-egg question: if we were to change the profile, would that make the healthy animal sick? Or does disease cause the changes to the microbial and chemical profile?

That remains to be looked at and established, but there are a lot of observations that point to the fact that diseased animals have different microbial and chemical profiles in their digestive tracts. But cause and effect is really complicated to demonstrate in the lab. It’s difficult to control for everything so precisely.

Are you studying a specific health concern right now?

Some of the work in my lab deals with obesity and inflammation. One hypothesis about the negative health consequence of obesity has to do with inflammation, not like when you have a fever in an acute response to an infection, but chronic, systemic inflammation, such as what you get in type 2 diabetes, for example.

We think the profile of the bacterial metabolites may be altered in obese individuals, and that may have an impact on inflammation, not just in the gut but in other parts of the body, too. Those metabolites can get out of the gut and can be found in different tissues. So we are looking first to identify bacterially derived metabolites in the fat tissue, and, second, to see if they contribute to inflammation.

What does the future hold?

Probably the next frontier—I don’t know how many generations of graduate students down the road—would be looking at the axis of communication between the gut and the brain. The obvious thing here is appetite, but more broadly, it’s going to be fascinating to understand the link to behavior. There have been reports linking autism spectrum disorder (ASD) with altered gut microbial metabolite profiles. A really intriguing mouse study found increased levels of two microbiota metabolites in a model of ASD. Remarkably, injecting one of those metabolites into a mouse induced anxiety-like behavior. The cool thing is that our screen found that the other metabolite may play a role in modulating the immune system.

We know that neurotransmitters such as serotonin and dopamine are present in the digestive tract. These are both chemicals that affect brain function. There are reports that people with post-traumatic stress disorder have an altered gut microbial profile. So we know there is some relationship between the gut and the brain. I think there will be quite interesting questions to answer.

What other problems could you tackle?

I think you could design microbes that heal and take care of the body. We could go about doing that by identifying key chemicals that you need to have in your system to stay healthy, say, to ward off infection. Once we identify those molecules you want to have, it could come down to eating the right kind food, for example, more broccoli. We know broccoli’s a healthy food, but we don’t really know why. Maybe it has all those chemicals you need. But we can also imagine engineering microbes to produce those needed chemicals.

We can even imagine engineering microbes with additional functions, like having a sensor that can say, “Oh, this person doesn’t have enough vitamin B.” And then it produces enough to replenish us.

Or we could think about engineering microbes that would indicate the onset of disease or let us know how effective a given treatment is. That could be a game-changer for global health. All kinds of things are happening in the digestive tract. Public health workers can collect stool samples, even in remote places in the world where you can’t get to a hospital. That is so much less invasive than biopsies.

Broadly speaking, we’ll be able to find ways to treat and prevent disease by promoting gut health. There’s so much potential here.