A Potential Breakthrough on Liver Cancer 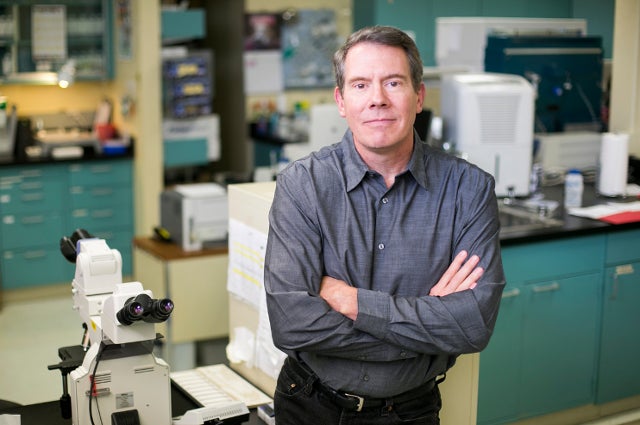 In the battle of humans versus disease, the latter usually gets the upper hand in the end. For patients with terminal diseases, the pace of biomedical research can seem glacial. It takes years—if not decades—to understand how disease spreads in the body and to develop a drug to treat it. Then there are countless more years of testing in the lab and animal studies before a drug can be approved for clinical trials in humans. You only have to consider the millions of lives lost to HIV/AIDS before drugs were developed to manage the disease.

So it’s as exciting as it is rare when a breakthrough occurs that may lead to more immediate relief for patients. Such may be the case with liver cancer, thanks to research by Arlin Rogers, an associate professor and head of pathology at the Cummings School of Veterinary Medicine, who has found that prolactin, a hormone that helps nursing mothers produce milk, may help prevent the disease.

Liver cancer is relatively uncommon in the United States, where lung, breast, prostate and colorectal cancers are most commonly diagnosed. But worldwide, liver cancer is the second leading cause of cancer deaths after lung cancer, according to the World Health Organization (WHO). The disease is particularly prevalent in Southeast Asia and sub-Saharan Africa, where it is associated with hepatitis B and C viruses, as well as toxins in the food and water supply.

The number of U.S. patients with the disease is growing, too, particularly in those who received blood  transfusions in the 1970s and 1980s before hepatitis C was discovered and routinely tested for in donors. “A lot of hemophiliacs wound up with hep C, and those patients are now getting chronic liver disease, which can progress to cirrhosis and then cancer,” says Rogers. “Another wave looms on the horizon as well, as individuals suffering from obesity and type 2 diabetes develop chronic liver diseases that increase the risk of cancer.”

Rogers, a veterinarian with a Ph.D. in experimental pathology, began studying liver cancer as a researcher at MIT, where he became intrigued by an odd phenomenon. In all the studies of liver cancer in mice, researchers used only male animals. “That’s because males got it at a higher rate, so it was cheaper to just use males,” Rogers says. “Few seemed interested in understanding why that was the case.”

Liver cancer in humans is also far more prevalent among males, who get it at a rate two to eight times higher than females, depending on the country, according to WHO data. Diseases that disproportionately affect males, such as cardiovascular disease, share a common thread of chronic inflammation—a state in which the body’s immune response causes tissues to swell with blood cells and chemicals. Rogers thought that might be the case with liver cancer, too.

But what influences those different degrees of inflammation between men and women? The obvious answer would appear to be sex hormones such as testosterone and estrogen. However, while reviewing scientific literature, Rogers found evidence in an obscure paper from the 1940s that the root may lie in a different area of the body: the pituitary gland, which releases growth hormone and prolactin.

In the laboratory, Rogers and his colleagues exposed liver cells to pituitary hormones. Growth hormone showed little effect; however, prolactin significantly dampened certain inflammatory responses. Building on that surprising discovery, Rogers surmised that prolactin may play a role in protecting women against liver cancer. “I think a single-minded focus on estrogen and testosterone is too simplistic,” he says. “It’s not a sex hormone story; it’s a pituitary story.”

To test this hypothesis, Rogers ran a series of experiments with mice, including one using both female and male animals that could not produce prolactin. The female mice without the prolactin gene developed cancer at dramatically higher rates—75 percent, compared with 10 percent in normal female mice with prolactin. There was even an effect in the male mice, though not as pronounced—the male mice with prolactin developed cancer at around the same rates as those without prolactin, but showed only about a third of the tumors. “I thought we might see an effect in the females,” he says, “but I wasn’t expecting to see a response in males. The prolactin is even helping them.”

That finding holds promise for human patients, because drugs that can artificially amp up levels of prolactin already have been approved by the Food and Drug Administration. These medications, most commonly used in patients with psychiatric or gastrointestinal disorders, are sometimes used “off label” to spur milk production in new mothers who are having trouble  producing breast milk. Rogers tested one such drug in mice exposed to a chemical that induces liver cancer. He found that only 22 percent of male mice taking the drug contracted cancer, compared with 100 percent of those not taking the drug.

Rogers published his findings in the August 5 edition of the Proceedings of the National Academy of Sciences. He hopes his research might one day help patients not only in the United States, but also in developing countries, where about 83 percent of liver cancer cases occur, according to World Cancer Research Fund International.

“If the targets we identified in mice also work in humans, we could start shipping drugs to Africa and Asia tomorrow,” he says. “The drugs already exist, and they are already approved. The hurdle would be acceptance by physicians and patients.” Currently, Rogers is collaborating with statisticians at Tufts Medical Center to determine whether there is evidence of lower liver cancer rates in patients who already are taking these drugs for other ailments.

If using prolactin-inducing drugs as a treatment pans out in clinical trials, it may be only a matter of years, instead of the usual decades, before such drugs could be prescribed for people at high risk of developing the disease. “We don’t think this is going to cure liver cancer, but it might help prevent it,” says Rogers. “History shows the best way to reduce the burden of cancer is to stop it from occurring in the first place.”

Michael Blanding is a Boston-based freelance writer and author of The Map Thief (Gotham, 2014).