The medical school is mourning the loss of fourth-year medical student Mohamed (“Moe”) Zeidan, who was killed in a bicycle accident in Medford, Massachusetts, on Sept. 5. He was 29.

“Moe was an extraordinary person in every regard,” Amy Kuhlik, dean of students at the medical school, wrote in an email message to students. “He came to Tufts three years ago, having graduated several years earlier from Amherst College, where he was a standout student, an All-American soccer goalie and president of the student body. He quickly embraced life as a Tufts medical student and became a fixture at class events, community service engagements and the hospital. 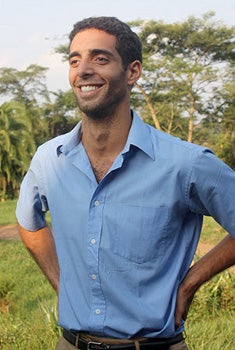 “Moe had an unusual ability to connect with people in a way that didn’t feel forced,” said Assistant Professor Laura K. Snydman, M04.
“Moe lived life with great enthusiasm and joy,” Kuhlik continued. “He had a terrific sense of humor and a kind demeanor that endeared him to everyone he met. He will truly be missed but never forgotten at Tufts.”

Dean Harris Berman echoed those sentiments, saying, “Moe was obviously an extraordinary young man, and our whole campus is in mourning. This is a terrible loss.”

Zeidan was born in Edina, Minnesota, and grew up in nearby Eden Prairie. He was the oldest child of Ali and Raghda Zeidan (who died in 1993) and stepson of Fatima Zeidan; he had a brother, Rami Zeidan, and a sister, Zeina Zeidan. He was a neuroscience major at Amherst College, where, in addition to his other activities, he worked as a community service leader through the Community Outreach Office. Between college and medical school, he spent two years working as a research assistant in the Department of Psychiatry at Massachusetts General Hospital. That work led to multiple publications in peer-reviewed journals, and he was invited to give several presentations at national meetings.

One example from Zeidan’s life suggests his uncommon generosity of spirit. During the summer before he arrived at Tufts, he had volunteered for a public health organization in Uganda, where he contracted the parasitic infection schistosomiasis. His extended treatment back in Boston left him frequently confused about exactly what was going on. “I felt in the dark,” he said. “And if I felt that way, I started to think it must be even more difficult for someone who isn’t a med student and has even less understanding of the system.”

In response, Zeidan developed a proposal that called for medical students to meet with patients before they are discharged from the hospital in order to review their diagnoses and treatment plans. The proposal won him an Albert Schweitzer Fellowship in 2012, for which he partnered with the emergency department at Tufts Medical Center to lay the groundwork for a system that would provide better medical information sharing as a matter of course. “There’s something to be said for understanding that we live in a community,” he observed.

“Moe would have been a phenomenal doctor,” noted Assistant Professor Laura K. Snydman, M04, who, in her role as site clerkship director, supervised Zeidan during two internal medicine rotations at Tufts Medical Center. “Moe had an unusual ability to connect with people in a way that didn’t feel forced. He was hardworking, inquisitive and humble. He quickly became universally loved by everyone he met here at the medical center—nurses, house staff, attending physicians and patients alike.”

A private family burial service will take place in Minnesota, where Zeidan will be laid to rest next to his mother.

A celebration of Zeidan's life will take place on Saturday, Oct. 25 at 4 p.m. in Goddard Chapel on the Medford/Somerville campus, planned with the help of Zeidan’s fiancée, Karen Axten, M15.

To Leave No One Behind in Afghanistan