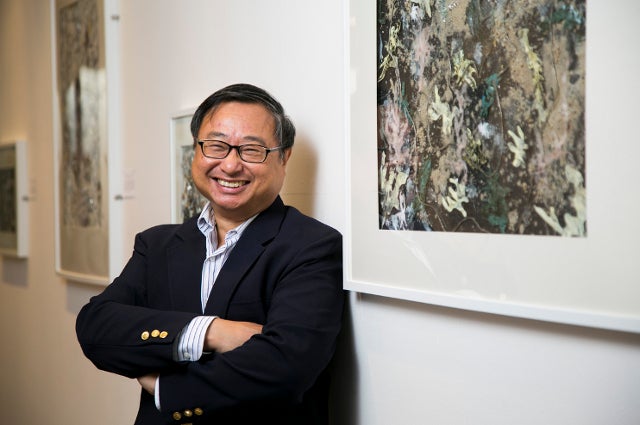 In the sixth of an occasional series, Tufts Now highlights the hidden talents of Tufts faculty and staff.

When he was a boy, Dan Jay’s father would hoist him onto the counter in the family's Toronto grocery store, hand him some butcher paper and a pencil and let him draw. “It was cheaper than babysitting,” Jay says. When he was a little older, his parents bought him a chemistry set, setting up a rival interest. He still loved to draw, but science excited him, too.

He went on to earn a Ph.D. in biochemistry and molecular biology from Harvard, and is now a professor of developmental, molecular and chemical biology at the Sackler School of Graduate Biomedical Sciences. He identifies proteins on cancer cells that are important to both metastasis and drug resistance; the work could produce potential targets for developing drugs to counteract both processes.

Still, art beckons. When Jay travels for science conferences, he sketches outdoor markets or street scenes in places such as Istanbul and Japan. He has a partnership with the Urbanity Dance Company in Boston’s South End to sketch their rehearsals. And every Sunday for the last 30 years he has attended a studio class in Cambridge, making drawings of live models.

Now he has found a way to combine science and art in a new set of drawings made with liquid nitrogen and chemicals grouped together alphabetically by their symbols on the periodic table of elements. The work, Archemy: Chemical Drawings by Dan Jay, will be exhibited at the Slater Concourse Gallery in the Aidekman Arts Center on the Medford/Somerville campus now through Oct. 31.

Jay’s inspiration for the work came during a summer art workshop in Provincetown, where he had made some 30 drawings. The instructor put one on the wall and said to the class, “This is a beautiful drawing, but there are 10 million people who can draw like Dan. What is his unique voice?”

The comment surprised Jay, and got him wondering what distinguished his art. He realized that it was his understanding of science that perhaps set him apart as an artist, and he started to experiment with combining his two passions.

In his lab at Tufts, he uses liquid nitrogen to rapidly freeze cells in order to suspend their metabolism for long-term storage; he wondered what would happen if he combined liquid nitrogen with charcoal and other art materials. So last summer, he loaded a four-liter tank of liquid nitrogen into his car—don’t worry, it’s safe—and drove to a workshop on experimental drawing in Provincetown with the idea of exploring how different chemicals would combine with drawing materials.

He poured the liquid nitrogen onto a canvas, mixing it with the likes of charcoal powder, the black sumi ink used in East Asian calligraphy and acrylic paint. The results were striking.

Summoning the scientist within, Jay wrote up his efforts as a scientific experiment, complete with rationale, aim, preliminary data and results; it was published in the online journal Impact.

“Liquid nitrogen does provide a novel way to make interesting marks, and the use of it bears further investigation,” he notes in the paper.

He went on to create art using chemical elements as the media, works that are in the Archemy exhibition. They “utilize a deep understanding of the chemical properties and uses of elements not usually applied to making art,” he says. He grouped them alphabetically by chemical symbol, such as a piece that uses silver, gold and aluminum (Ag, Au, Al) to create striking images. 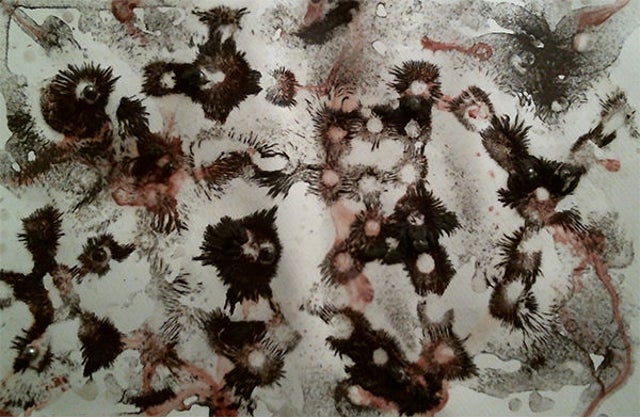 “Magnetic Field 6,” by Dan Jay
“These studies take advantage of my knowledge of chemical reactions, but the primary purpose remains to create an interesting work of art,” Jay writes.

While our society encourages specialization, he notes there are many examples of scientists whose lives encompass two passions: Alexander Borodin was a chemist and a composer and Thomas Huxley was a biologist and a humanist.

“Science and art,” Jay says, “are two worlds, but I feel comfortable in both and have a wonderful sense of community in both. Each can enrich the other.”

Tufts University Art Gallery hours are Tuesday through Sunday from 11 a.m. to 5 p.m. and Thursday until 8 p.m. Admission is free.

See more of Dan Jay’s art at his website.