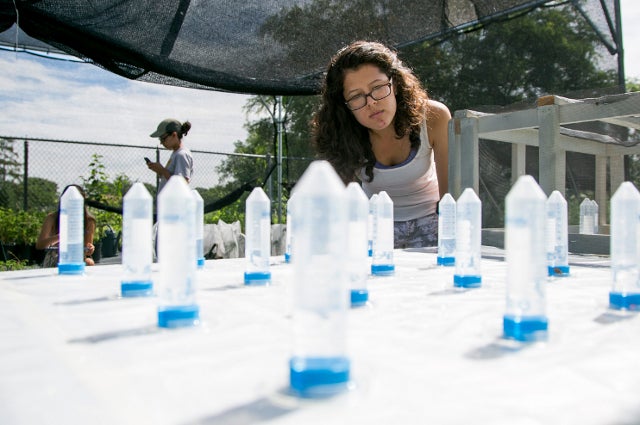 Honey bees don’t scare Rachael Bonoan. They can buzz her face, and she doesn’t flinch. That’s a good thing, since she spent much of the summer in their company, running an experiment to see whether certain minerals can keep them healthy.

Honey making aside, bees are important for agriculture. Many of our foods are dependent on them for pollination, from almonds and peaches to squashes and soy. In recent years, the population of honey bees in particular has declined drastically as colonies have collapsed, killing them off in alarming numbers—up to 50 percent in the last decade. Several factors have been cited as possible causes, from insecticides called neonicotinoids that damage their immune systems to stress on the hives from being trucked to farms and orchards where the bees are deployed to pollinate large monocultures of crops.

Bonoan, a doctoral student in biology studying with Professor Philip Starks, landed on her mineral theory while working on another bee project in the summer of 2013. An undergrad, Georgiana Burrass, A14, noticed honey bees clustered around a muddy puddle, even though there were much cleaner water sources nearby. Perhaps, Bonoan surmised, the bees were attracted to certain minerals in the dirty water that were needed to optimize their health.

“I’m ultimately interested in how nutrition affects the immune system in honey bees,” says Bonoan, who believes that minerals could be an important part of that equation. 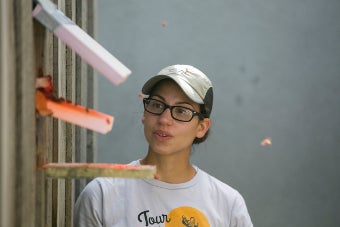 “I’m ultimately interested in how nutrition affects the immune system in honey bees,” says Rachael Bonoan, examining a color-coded hive exit. Photo: Kelvin Ma
For the experiment she ran this summer on the grassy hill overlooking the Eliot-Pearson parking lot on the Medford/Somerville campus, she used eight honey bee hives maintained by biology researchers in a hut behind Cousens Gym. Bonoan trained the bees to come to her research site, located about 100 yards from the hives, by placing jars of sugar water at staged intervals until the worker bees got hooked on the ready food supply.

With the assistance of Marlen Rodriguez from Fullerton College—participating in the National Science Foundation’s Research Experiences for Undergraduates program—and Taylor Tai from Swarthmore, Bonoan set up water vials on a table, lacing each with different minerals such as sodium, magnesium or phosphorus. The team catalogued how many bees visited each vial. At the end of the day, they measured how much the bees drank from each vessel to determine which minerals were most in demand. As a control, they set up a distilled water vial under mesh netting nearby and measured water lost to evaporation.

They also tracked the hive each bee belonged to by dusting worker bees with different colored powders as they exited the hives. The team noted which colored bees were drinking from which mineral-laden water source, and later planned to measure hive health—using weight of the brood, for example—to determine whether there is a connection between bee health and specific minerals.

Although the findings aren’t all in yet, Bonoan plans to conduct the same experiment this fall to see whether the honey bees are attracted to different minerals when the season changes.

The Attack of the Wool-carder Bees 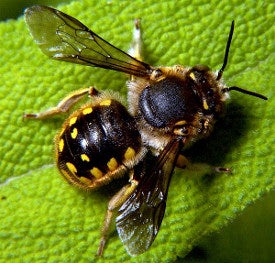 A European wool-carder bee. Photo: Bruce Marlin
To test this, over the summer Graham worked with Victoria Forde-Tuckett, an undergraduate from Oakwood University in Huntsville, Alabama, to set up three large blue tents on the hill behind Eliot-Pearson, each divided into two compartments. Three small bumble bee hives (they ordered them through the mail) were embedded in the ground, and the bees had access to each tent compartment. The tents had no flooring, and each was filled with flowers that bumble bees enjoy—cat mint and lavender, for starters.

Graham put wool-carder bees—they are ubiquitous and easily captured around campus—in one side of each enclosure where the bumble bees had been regularly foraging for pollen and nectar.

“We had three to five male and female wool-carders in there for a week at a time, and at least one of the males staked out territory around the flowers,” says Graham. “The bumble bee coming near those flowers would be attacked and go back to the hive, missing a foraging opportunity.” As a control to discover whether the bumble bees would hang around if the wool-carders couldn’t get at them, one side of each tent enclosure was set up so only the bumble bees could get in. (The only exit from the enclosures was via the bumble hives, so to wool-carder bees stayed until released by Graham.)

Graham and Forde-Tuckett checked the tents four times a day and counted how many bumble bees would venture into the enclosures. The results, Graham says, were consistent: “If the wool-carder bee is there, then the bumble bees won’t be there.”

Based on this limited experiment, it’s not yet possible to know to what extent European wool-carder bees are affecting bumble bee populations on a larger scale, Graham says. Still, “we know bumble bees have to forage in other places if the wool-carder bee is present, and bumble bees are incredibly important pollinators in our area. So any disruption that limits their ability to forage is not good.”

Graham plans to continue with her bumble bee experiments. Next year, she hopes to have six hives, double what she had this summer, and look directly at how the health of the hive is affected by wool-carder bee presence.

And those leftover bumble bee hives? Come cold weather, they will do what all small hives do naturally: the queen will stop reproducing, and the bumble bees, which only have a life span of about four weeks, will slowly fade away.

Tufts Researchers Investigate How Sepsis Can Result in Cell Death