Is coconut oil good for you?

Alice H. Lichtenstein, Gershoff Professor of Nutrition Science and Policy at the Friedman School, serves up an answer

There is some data, however, to suggest it is best to avoid consuming coconut oil because it is relatively high in saturated fatty acids. Saturated fatty acids raise LDL cholesterol, which is associated with increased risk of cardiovascular disease. 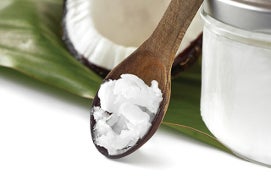 We do know that the preponderance of the evidence indicates that consuming unsaturated fat results in better health outcomes than eating saturated fat. So, if you are going to adjust fat in your diet, replace saturated with unsaturated fat. The total fat intake should be moderate, between 25 and 35 percent of your daily calorie intake. Using unsaturated fats such as soybean oil, canola oil and corn oil when preparing foods and making salad dressings is a good idea. Fat is good, fat is important, and unsaturated fat has health benefits.

Why is it important to learn handwriting?

How can I control my appetite?