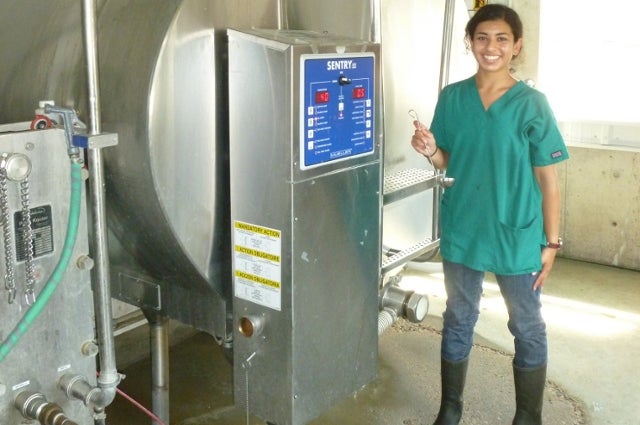 Who knew that what you pour on your cereal in the morning could be controversial? The debate over raw vs. pasteurized milk falls into two camps: those who argue that raw is healthier and others who label it downright dangerous.

Meera Sriram, V16, a Cummings School veterinary student who’s also pursuing a master’s of public health at Tufts School of Medicine, spent the summer studying the safety of raw milk. She found a little-known food-borne bacterium present in a large percentage of unpasteurized milk samples taken from dairies across southern New England. Although farm management practices appear to affect the odds of its transmission, Sriram says the findings support public health efforts to universally discourage the consumption of raw milk.

Although most people in the U.S. buy pasteurized milk, the Centers for Disease Control and Prevention estimates that 3 percent of the population, or some 9 million people, choose to consume raw milk instead.

Fans of raw milk argue that the high-heat process used during pasteurization to kill germs that cause salmonellosis and other infectious diseases also destroys many of milk’s nutritional benefits. (Federal experts disagree.) There’s also more profit in raw milk—small dairy farms that sell it directly to consumers can charge anywhere from $6 to $20 a gallon.

But unpasteurized milk is a public health concern because it can transmit tuberculosis and other diseases from livestock to people.

One worrisome bacterium is Coxiella burnetii, which causes Q fever. Animals infected with C. burnetii usually don’t have any symptoms, making diagnosis and prevention difficult. In people, the symptoms vary greatly, from flu-like illness and general malaise to extremely high fever and severe headaches—and even serious liver and heart damage and pregnancy loss.

Recent studies indicate that “the bacterium is likely endemic in the U.S.,” Sriram says. A 2005 study at Cornell University found C. burnetii in 94 percent of unpasteurized milk samples taken from dairies around the U.S.; a follow-up study in 2007 by the U.S. Department of Agriculture found the bacterium in 77 percent of raw milk samples, she says.

Sriram set out to investigate the prevalence of C. burnetii in southern New England as well as how dairy management practices affect the spread of the disease. Her work, done through Cummings School’s Summer Student Research Program, was funded by the National Institutes of Health and the Morton A. Madoff Public Health Fellowship from Tufts School of Medicine.

“After cows are milked, raw dairy goes into a bulk tank. Commercial dairies will ship this milk out for pasteurization, whereas raw milk dairies repeatedly access the bulk tank to bottle the raw milk for sale,” says Sriram. “Either way, sampling the milk from the bulk tank gives you the most accurate picture of the herd’s health.”

Sriram also administered an anonymous survey to all the farmers to gain insight about the potential for disease transmission and farmers’ raw milk consumption. The survey asked about herd size and the dairy facilities’ age, type of ventilation, milking protocols and bedding and housing of cows.

The samples were sent to a lab at Cornell, where DNA testing showed C. burnetii in 40 percent of the bulk tank samples. The bacterium was found at 21 percent of the raw milk dairies, while C. burnetii was present in 54 percent of the commercial dairy samples. Although the rates weren’t as high as those in the earlier national studies, Sriram says “there is a genuine public health concern for people consuming [raw milk] regularly, including the dairy farmers themselves.”

The dairies with larger herds tended to have significantly more disease, which is likely why the commercial dairies had higher incidence of C. burnetii than the ones selling raw milk. Dairies that used cooling fans in their barns were nearly 6.5 times more likely to test positive than farms that did not, which Sriram says “makes sense, given that fans may aid in spreading what’s most often an airborne disease.”

She also found that dairies of farmers who used gloves during the milking process were about 3.5 times more likely to test positive than those of farmers who did not. “This goes to show we may not fully understand how C. burnetii can be spread,” Sriram says.

Forestripping, a practice in which dairy farmers take a small sample of milk by hand for initial milk-stream evaluation, seemed to decrease odds of the disease by a factor of three. “Perhaps that’s a simple recommendation that could greatly improve management practices for the disease,” Sriram says.

This kind of field research is known as “participatory epidemiology,” a concept Sriram learned from Jeffrey Mariner, V87, a research professor at Cummings School. Mariner led an international team in eradicating rinderpest, a devastating infectious disease of cattle that resulted in the starvation of millions of Africans who relied on the animals for food. Mariner worked with nomadic cattle herders, veterinarians and local officials in East Africa to determine what was needed to develop and administer an effective vaccine to wipe out the virus.

“That idea really clicked for me,” says Sriram, a self-described “city girl” who found an unexpected calling in agriculture through her field studies. “My hope is that I’ll continue working with farmers to gather data in the field, formulate results and work together to solve problems.”