The signs of deteriorating sight are easy to miss in dogs and cats, but not if you know what to look for 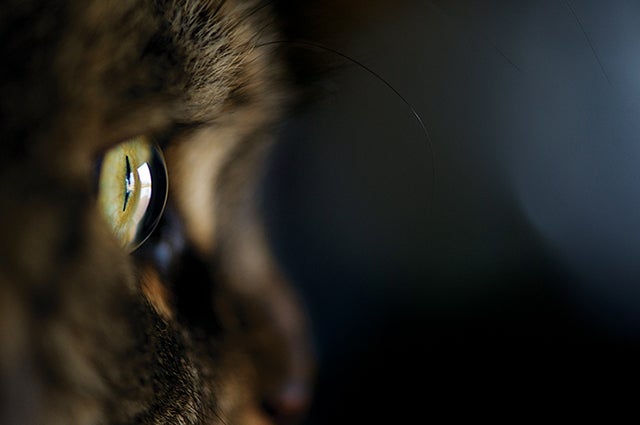 Pets don’t have to read an eye chart to keep a driver’s license or don prescription glasses to see the tiny text on a smartphone. But they still need eye care. In fact, animals experience many of the same eye problems that people do, including cataracts, glaucoma and injuries to the cornea.

Unlike people, though, pets usually don’t wind up at the doctor because of obvious vision loss. “Dogs and cats are very good at memorizing their environment,” says Christopher Pirie, one of Cummings School’s three board-certified veterinary ophthalmologists. “We see lots of patients that have pretty advanced visual dysfunction without their owners being aware of it simply because the layout of their home never changed.”

The vast majority of owners bring their pets to the vet because the animal has a red eye or is squinting.

To diagnose the problem, a veterinarian will measure tear production, stain the eyeball to look for corneal ulcers (a scratch on the cornea) and check the pressure inside the eyeball to screen for inflammation or glaucoma. A slit lamp provides veterinary and human ophthalmologists with a super-magnified view of the cornea, iris, lens and interior of the eye; other diagnostic equipment is used to examine the retina, the layer of light-sensitive cells at the back of the eyeball. 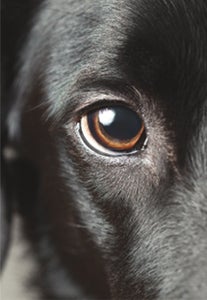 Photo: iStock
It may be hard to imagine your dog or cat sitting still through such a comprehensive exam. However, “95 percent of our exams are performed with the animal awake,” says Kara Gornik, an ophthalmology resident at Cummings School. For example, she notes that “all Labs have a head bob. You just learn to move with them as their heads go up and down.”

Whether an eye problem is due to disease, injury, anatomical irregularities or genetics, the treatment for pets and people is pretty much the same. And, says Gornik, “the vast majority of conditions can be cured or at least successfully treated for a while with medications if they’re caught early enough.”

Troubles with the cornea—the transparent outermost layer on the very front of the eyeball—account for many trips to the veterinarian. Dogs, cats and rabbits experience corneal trauma (scratches), foreign bodies (dust) and ulcers, which can also be caused by disease and inherited conditions.

“Corneal ulcers can cause the eye to rupture if they become deep, so we like to catch those early,” says Gornik, and prescribe the appropriate medications. For some severe ulcers, corneal transplants or conjunctival grafts are used to patch the wound with a tiny graft from a donor animal’s cornea or from the patient’s conjunctiva, the transparent mucous membrane that lines the inside of the eyelids and the white part of the eye.

Eye problems in cats tend to be caused by viruses, says Gornik. Feline herpes, a common respiratory virus, can cause watery eyes, squinting, discharge, severe conjunctivitis and even corneal ulcers. The disease is treatable with medication, but can recur over the pet’s lifetime.

Dogs often suffer from glaucoma, an umbrella term for conditions in which fluid buildup causes abnormally high pressure in the eyeball and begins to damage the retina and optic nerve; it can lead to blindness.

“There is no cure for glaucoma, but you can treat it,” says Stefano Pizzirani, another ophthalmologist at Cummings School. “The goal is to lessen the pressure within the eye and delay the onset of blindness.” Eye drops often reduce pressure, he says, but in some cases, pets will need surgery. Tufts Veterinary Emergency and Treatment Specialties (Tufts VETS) in Walpole, Massachusetts, is the only practice in New England that offers endolaser surgery, a human medical procedure in which an incision is made in the eye and then a beam of light is used to destroy the structures behind the iris responsible for excess fluid production.

Cataracts, the clouding of the eye lens, can occur in any species, but are most common in dogs. Although cataracts can be caused by diabetes, trauma or inflammation, the condition is mostly inherited and if left untreated, can cause blindness or glaucoma. 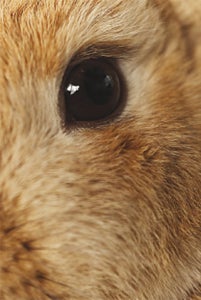 Photo: iStock
Cataract treatment for pets and people is the same. After making a small incision in the eye, the veterinary ophthalmologist uses a tiny probe to break up the cataract with sound waves and suck out the cataract particles. An artificial lens is implanted to replace the diseased one. More than 90 percent of canine patients regain normal vision after the surgery, says Pirie.

The Foster Hospital treats pets with eyelid problems. Entropion, a condition in which the eyelid rolls in and chafes the surface of the eye, can lead to scarring, infection or ulceration if the misshapen lid is not surgically corrected. Dogs and cats can also suffer from “cherry eye,” a congenital condition in which a gland in the third eyelid pops out of place and appears as a red mass in the corner of the eye.

Veterinary eye surgeons operate on their patients under a microscope most of the time, and pets undergoing surgeries inside the eye also require much deeper anesthesia than what’s used in general veterinary practice. “We essentially paralyze patients, putting them on a ventilator and relaxing all their muscles,” so the eye has absolutely no reflex, says Gornik.

Although an owner may be anxious about that kind of surgery, Pirie says it can preserve a pet’s quality of life. “From the dog’s perspective, it’s the most practical option,” he says. “The eye is not functioning as it is. The dog won’t look in a mirror and wonder what happened to its face. It just doesn’t want to be in pain anymore.”

Most domestic animals that are partially or fully blind function quite well, says Pirie, who had a kitten patient that still chased foam balls after having both eyes removed because of a congenital problem.

Basic eye care is also essential to a pet’s quality of life, says Pirie. “The eye is four times more sensitive than the tips of our fingers. Think about when you have an eyelash or piece of dust in your eye,” he says. “Every time you blink, it is right there. You’ll do anything you can to get it out.”

Animals with eye pain rarely whine, pant or cry to signal their discomfort, says Pirie. Instead, they tend to sleep more and be less active—symptoms commonly misattributed to aging. “Many owners don’t appreciate the impact of an eye problem until after we’ve addressed it,” he says, “when their dog starts bouncing around like a puppy again.”

Who sees better, pets or people? It all depends.

How we see a city street (top image) versus how our cats would see the same scene. Photo: iStock
When it comes to the ability to see something clearly, humans win, says Christopher Pirie, a veterinary ophthalmologist at Cummings School. Normal vision in people is 20/20. A dog with normal vision would be 20/60, and a cat around 20/100, he says.

“That means a dog needs to be within 20 feet of what a person can see at 60 feet,” making normal human vision about three times better than a dog’s and five times better than a cat’s, Pirie says. “That doesn’t mean that dogs and cats can’t see anything at those distances, just that what they see is grainier or more pixilated.”

Humans also have the advantage in terms of color perception, compared with other mammals. Cats, dogs, horses and small mammals, such as rabbits, have only two types of the color-detecting cells called cones in their retinas; we have three, says Pirie. Pets’ color palette has a much smaller range than ours, consisting of duller blue, yellow and green tones (given the lack of cone cells that see colors along the red part of the spectrum). “The contrast between colors also is not as vivid,” he says.

But birds and many reptiles and fish have four types of color-detecting cones. “Their world is full of colors we can’t even imagine,” says Mary Caswell Stoddard, an evolutionary biologist who is researching avian vision and coloration at Harvard’s Museum of Comparative Zoology. “I’d love to wear bird goggles for a day.”

Because their eyes are set on the side of their heads, horses can view things separately with each eye (monocular vision) in addition to using both eyes to look in one direction (binocular vision). This gives horses a wider, more circular range of sight than people. “There are only about 10 degrees in their visual field they can’t see,” which gives them nearly panoramic vision, says Kara Gornik, an ophthalmology resident at Cummings School.

Animals’ ability to see things in low light is also far superior to ours, notes Pirie. Cats have six to eight times as many rods—the type of cell that’s most sensitive to light—in their retinas as do humans. The structure of a feline eye enables it to capture and use very low levels of light. “You may get up in what you perceive to be complete darkness and stub your toe,” says Pirie, “but your cat will be happily watching you do it.”—GR

Signs of an Eye Problem

If your pet is experiencing any of these symptoms, you probably want your veterinarian to check it:

While dogs’ and cats’ ability to memorize their surroundings often masks impaired vision, behavioral changes in horses can quickly alert owners that something is wrong.

Because horses have evolved to scan the horizon for possible predators, they “startle at visual disturbances much easier than dogs and cats,” says Kara Gornik, a resident in veterinary ophthalmology at Cummings School. “If a horse’s vision is off in any way, they can spook on the side of the affected eye or react differently to situations than they normally would. With hunters and jumpers, a rider may notice that the horse seems to be struggling during events.”

Like people, horses can become more farsighted or nearsighted with age, says Gornik, “but we can’t fit them for glasses or contact lenses.” Equine cataract surgery is also not nearly as successful as the same surgery in dogs and cats.

However, she says, many other eye conditions can be treated successfully if caught at an early stage.

Corneal ulcers often result from minor trauma, such as a scratch from a tree branch, a fly bite or a speck of dust. Injuries to the surface of the eye can lead to scarring that can create a blind spot in a horse’s field of vision, especially if it’s not caught early. Veterinarians often recommend fly masks to protect an injured eye from harsh light or insect bites.

Iris cysts are perhaps the most common reason for spooking in horses, says Gornik. Fluid-filled pockets form on the horse’s corpora nigra, a kind of equine eye curtain that extends from the iris and protects the retina from bright light. The cysts, which an owner usually can’t detect, “become larger until they actually obstruct the horse’s pupil,” she says. “Instead of seeing normally, the horse sees a black shadow, especially during the daylight, which makes it more likely to spook.”

Remedying the problem is simple, says Gornik. “We use a diode laser to pop the cysts, which sound like Rice Krispies when they pop.”—GR