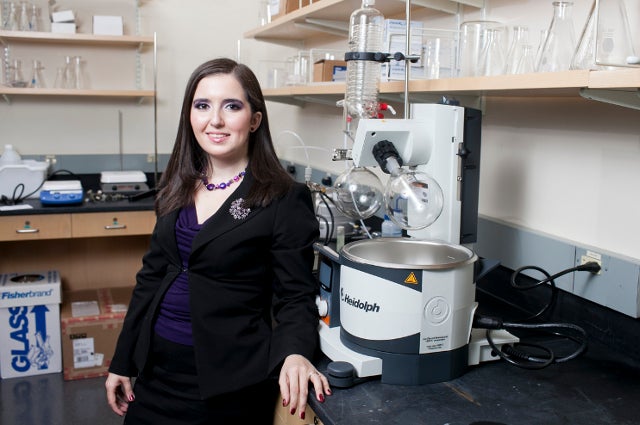 Fracking for oil and gas is a dirty business. The process uses millions of gallons of water laced with chemicals and sand. Most of the contaminated water is trucked to treatment plants to be cleaned, which is costly and potentially environmentally hazardous.

A Tufts engineer is researching how to create membranes for filters that may one day be able to purify the water right at a fracking site. Ayse Asatekin, an assistant professor of chemical and biological engineering, is designing materials for sophisticated filters that would be more cost-effective and use less energy than current methods. They would work not only at fracking sites, but could also be used to clean industrial waste from manufacturing and pharmaceutical companies and to provide clean drinking water.

Using filters to purify water isn’t new. Hippocrates, in the fourth century B.C., invented a bag filter to trap sediments that caused water to smell and taste bad, while Sanskrit writings from 2000 B.C. describe sand and gravel filtration. Water is still filtered using the same basic principle: force it through a porous membrane that traps large particles while allowing clean water to pass through.

But to catch certain chemicals, you need a membrane with pores that measure just one nanometer across. For perspective, a strand of human hair is some 60,000 nanometers wide.

For this nanotechnology, Asatekin has turned to polymers—molecules strung together to form long chains. “A polymer is like a necklace of beads,” Asatekin says. “You can make a long chain or a short chain; you can make branches going off it. By playing with all these things, you can control a polymer’s configuration and its properties.” 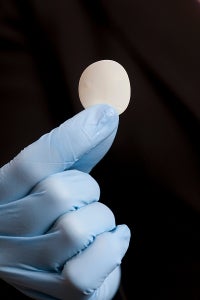 Ayse Asatekin holds a sample of a water filtration membrane in her lab. Photo: Kelvin Ma
She’s using the polymer chains to create a grid of ultra-small pores capable of snaring the tiniest pollutants. These nano-membranes are working in the lab, and will soon be ready to be designed for specific uses, manufactured and tested in the field.

But someday, in addition to being small, Asatekin’s polymer filters will also be smart: she’s experimenting with polymers that could distinguish between different chemicals. “So even if two molecules were the same size, the polymer would ‘know’ that one has certain functional groups that the other lacks, and be able to block it,” she says.

Right now she is testing polymers that can recognize the difference between molecules using characteristics that define their structures. This could allow, for example, a smart membrane to separate a pharmaceutical from the chemical compounds that catalyze the reactions to create the drug.

Asatekin’s inspiration for the polymers came from observing bacteria. All bacterial cell walls, cell membranes and membranes that separate the nuclei from the cytoplasm have structures that allow one type of molecule to pass through their "doorways" while blocking others, she says.

“For example, there is one structure that allows a sugar to come in, one that allows calcium ions but no other molecules,” she says. “Each cell’s wall or membrane structure has its own target, and is very selective—this is what I am hoping my polymers will be able to do maybe 10 to 15 years from now.”

A polymer membrane looks like a piece of slightly shiny paper. To create a membrane, Asatekin takes her polymers and paints them onto a large-pore, paper-like material that is itself an acrylic polymer specially manufactured to suit each project. They might not look exciting, but it is these membranes that will allow filtration to go mobile.

For the membranes to be turned into actual transportable units to be used in the field at fracking, manufacturing or other sites, a company would need to scale up their production to make them as wide, long sheets. Then, several flat membranes would be rolled into large cylinders that could be one inch in diameter by one foot long or as large as eight inches in diameter by 40 inches tall, depending on the use. These pipe-like structures would be attached to a pump and secured on a rig, sometimes singly and sometimes stacked, and pressurized water would be forced through them, coming out clean on the other side.

Whether they are used for pharmaceutical purification, cleaning industrial wastewater or producing drinking water, the membranes Asatekin’s group is designing could be cleaned and last longer than current filters. More field testing is needed to define exactly how these systems would function. At fracking or industrial sites, the filtering process eliminates the need to transport contaminated water to a treatment facility. The purified water could be reused without ever leaving the site.

And the membranes’ mobility means they could purify water in remote areas of the world, a boon for the estimated 780 million people with no access to clean water, according to the World Health Organization and UNICEF’s Joint Monitoring Programme.

The nano-membranes would also save energy by eliminating the need boil water to turn it into vapor and then distill it.

“The Department of Energy estimates that these industrial purification and separation processes account for 40 to 70 percent of energy costs generated by a chemical manufacturing process,” Asatekin says. “What we are working on is expanding the applications for polymer membranes that would improve the energy efficiency of many manufacturing processes by not having to use distillation, but instead, passing it through our selective filters.”

Asatekin’s polymer membranes have another quality important for industrial use—something called fouling resistance. This means that oil and other heavy substances can’t clog the membrane pores and foul the purification process. Clean Membranes, the Tyngsboro, Massachusetts, company that Asatekin co-founded and now consults for, is working with oil and gas companies across the country to develop polymer membrane applications tailored to their needs.

Hydration: What to Know for Hot Weather