Leila Fawaz recounts the long-forgotten history of the Ottomans’ losing fight in World War I, and the widespread suffering it caused 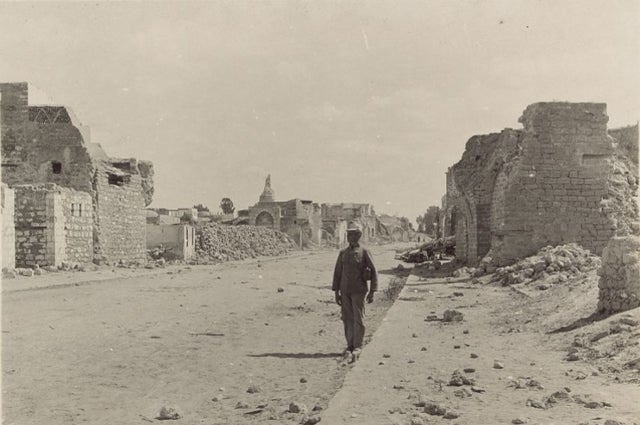 When most Americans think of World War I, images of trench warfare in France come to mind. But the Great War, as it was called then, wasn’t just fought in Europe. Tufts historian Leila Fawaz brings home this point in her new book, A Land of Aching Hearts: The Middle East in the Great War (Harvard University Press), exploring the ravages of the conflict in the region and the ensuing devastation, whose consequences are felt to this day.

The Ottoman Empire, a lumbering giant that was suffering inexorable decline after more than 600 years, chose to ally with Germany soon after the outbreak of war in 1914, and found itself embroiled in conflict on all sides. It fought battles that most people in the West have long forgotten, including in the Caucasus, Suez, Palestine, what is today Iraq, Persia and Gallipoli, near the Dardanelles.

Fawaz, the Issam M. Fares Professor of Lebanese and Eastern Mediterranean Studies, describes the battles that were turning points in the war and brings to life how the war affected everyday people throughout the greater Middle East. “Nobody has told the social history of the war, what the people felt,” she says.

She uncovered memoirs of soldiers who fought in the war and of family members left behind, who describe the years of suffering. “These are people who never have a voice, and I wanted to give them a voice,” Fawaz says.

The Ottomans already had to deal with plenty of conflict in the years leading up to 1914. They put down uprisings in Greater Syria—encompassing Syria, Jordan, Lebanon, Israel and Palestine today—and the Arabian Peninsula in 1910 and 1911 and Yemen in 1912. They fought what turned out to be the Balkan Wars of 1912-1913. 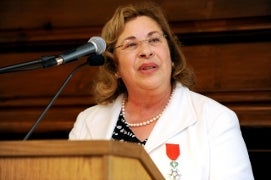 “The Great War was also the turning point from a stable politics to a tumultuous future, and remains a dominant memory in the region even a century later,” says Leila Fawaz. Photo: Matthew Modoono
Even with all those conflicts as background, the outbreak of hostilities in 1914 didn’t portend the widespread devastation that was to come. “At the time, people did not see it as a world war,” Fawaz says, “particularly as they lived the Great War in the form of many small wars.”

But as the larger war unfolded, it became clear that this one was truly devastating. Fawaz says the people in the Middle East suffered as much as—maybe even more than—those in Europe. “What remained of the country was depopulated, impoverished and in ruins to a degree almost unparalleled in modern history,” she quotes a historian as writing.

And Then There Was the Locust Plague

As the war started, men were quickly conscripted and sent far from their homes for battles against Russia and the British. They had little hope of seeing their families again. Fawaz quotes one source saying that eventually, three-fourths of all adult men in the empire were mobilized. The well-to-do could pay to avoid military service—at least in the early years of the war—so the burden fell most heavily on the poor. The inevitable sharp decline of agricultural production—40 percent, Fawaz says—resulting from the loss of men who farmed the countryside caused widespread hunger.

Fawaz recounts the privation caused by shortages of food and other basic necessities. She writes about an eyewitness report of “crowds of starving men, women and children, many of whom die[d] on the roadside” as they trekked from Beirut to the surrounding mountains to escape the war. Mothers tried to hand over their emaciated children to families with food, and people were reduced to eating animal carcasses that even wolves spurned. Fawaz quotes memoirs describing the devastating locust plagues in 1915 that stripped agricultural fields and even forests in Lebanon and Palestine. 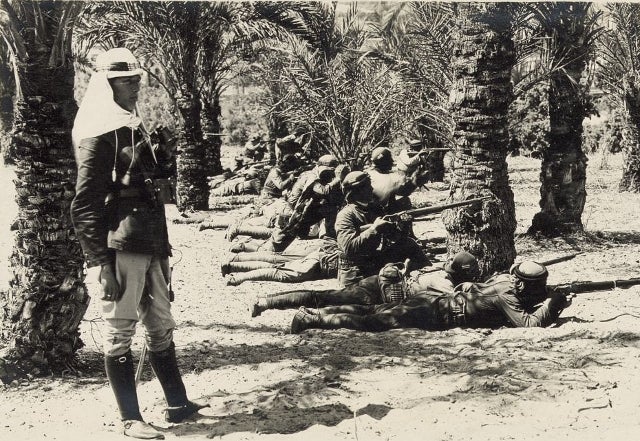 The Battle of Katiah in Suez in 1916. Photo: Library of Congress
More than a million civilians died from starvation and diseases made worse by malnutrition. The Turkish writer Halidé Edib, in her 1926 memoir, gave Fawaz the title of her book when she talked about her travels just after the war: “I have seen, I have gone through, a land full of aching hearts and torturing remembrances.”

The Ottoman soldiers suffered, too. They were ill-fed, ill-equipped and poorly trained. Early in the war, they battled the Russians in the Caucasus in December 1914, in a disastrous attempt to take long-coveted territory, but the soldiers, who often fought barefoot in the snow, were pushed back, and thousands perished in the cold. That wasn’t the only place that Ottoman troops were poorly provisioned; to this day, Fawaz says, in Syria the conflict is known as the “barefoot war.”

Battles were also fought in the blazing heat of Mesopotamia, where the Ottoman troops had barely enough water and food to survive. A British official’s description of the troops fighting against General Allenby’s forces in Palestine and Mesopotamia was striking, Fawaz notes: they were “hungry, ragged, verminous, comfortless, hopeless and out-numbered.”

The Collapse of the Empire

That’s not to say that everyone suffered. Fawaz devotes a chapter to entrepreneurs and profiteers who found opportunity amid the chaos, selling food at inflated prices, transporting goods for the military on both sides of the conflict and acting as spies. 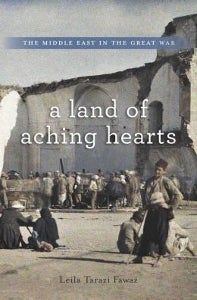 She also recounts the experiences of the 600,000 Indians—British colonial subjects—who fought for Britain on the Middle East fronts. That many of them were Muslim was an irony that was not lost on the Ottomans, who tried, through propaganda leaflets, to convince them not to fight their fellow Muslims, to little effect.

The war also weakened the Ottomans’ hold over their own people. The Arabs in particular were bristling under an increasingly heavy Ottoman hand in wartime. The resulting Arab Revolt, launched in June 1916 and encouraged by the British with promises of post-war independence, added another front for the Ottomans to fight. The Ottomans fought back brutally, hanging young Arab leaders in Damascus and Beirut.

As the war ended, the Ottoman Empire collapsed, setting the stage for conflicts that exist to this day. “In peace treaties that settled World War I, the victorious colonial powers divided up the region in ways that ignored natural divisions in favor of artificial borders that still cause resentment or conflict,” Fawaz writes.

The French took over Greater Syria, and broke it into several states, including modern Lebanon, which they created as a Christian state, while the British spurned Arab desires for independence, kept control of Egypt and established “mandates” in Palestine and in the newly formed—and oil-rich—Iraq. In doing so, they created a state where one had not previously existed, and installed King Faysal, who the French had pushed out of Syria. “No wonder, then,” Fawaz writes, “that cynicism was one outcome of the Great War.”

In the end, the Great War was, by most assessments, an unmitigated disaster. As Fawaz writes, “For much of the population, there was no glorious cause to die for, no nationalism to believe in or jingoism to mask the dislocation, mutilation and inherent loss in war.” She goes on to note that “the Great War was also the turning point from a stable politics to a tumultuous future, and remains a dominant memory in the region even a century later.”