The Genetics of Bloat 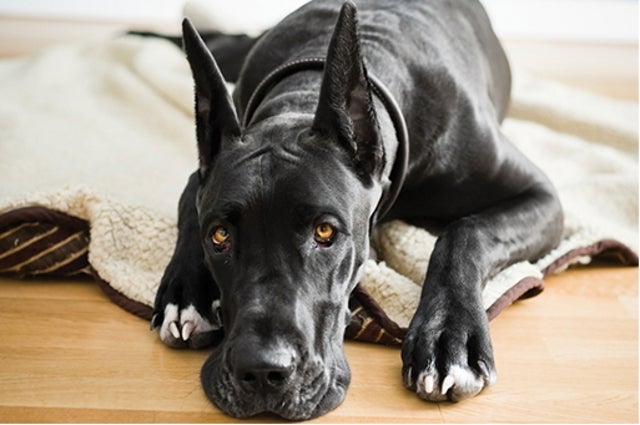 Veterinary researchers at Cummings School are teaming with scientists at Harvard, MIT and Nestlé Purina PetCare to decipher the genetics of bloat, a common cause of death in large dogs.

For veterinarians and breeders, bloat remains a baffling disease that’s difficult to prevent or treat. It develops when a dog’s stomach twists over, like a hammock in a storm, between its fixed attachments at the esophagus and the upper intestines. The stomach contents, which contain gas-producing bacteria, become trapped. The stomach swells from the growing gas pressure so much that it eventually crushes a major vein, preventing blood from returning to the heart and often sending a dog into shock.

“Bloat is a challenging disease because it escalates quickly,” says Claire Sharp, an emergency and critical care veterinarian at the Foster Hospital for Small Animals. “The dog is fine one minute and in a life-threatening situation the next. Dogs often die from bloat while their owner is off at work or sleeping at night.”

A quick diagnosis and emergency surgery to untwist and stabilize the stomach doesn’t guarantee a happy ending. “Many pets are euthanized because their owners can’t afford an unplanned major operation,” says Sharp. Even with surgery, 10 to 30 percent of dogs with bloat die, she says.

Bloat most commonly occurs in large-breed and deep-chested dogs, such as German shepherds, Great Danes, big mixed-breed dogs, standard poodles and Labrador and golden retrievers. And although bloat appears to run in families, Sharp says no single gene has been identified as the culprit.

The Tufts-led research could provide some genetic targets for the first test for bloat. Sharp and Elizabeth Rozanski, another emergency and critical care veterinarian at the Foster Hospital, have been awarded a two-year, $250,000 grant from AKC Canine Health Foundation to unravel the complex genetics of bloat. They will work with researchers at the Broad Institute of Harvard and MIT, who are studying the genetics of purebred dogs to gain insight into how human and canine diseases develop, as well as scientists at Nestlé Purina PetCare who want to understand the effects of nutrition on dog health.

Using blood samples from canine patients at Cummings School as well as samples from the Broad Institute, researchers will attempt to tease out the differences in the genetic makeup of purebred dogs with and without bloat.

The Tufts-led research could provide some genetic targets for the first test for bloat.

Currently, researchers believe that bloat is most likely linked to a dog’s size and conformation, among other factors. “The ligaments that hold the dog’s stomach in place may be too loose,” Sharp says. She notes that bloat also appears to occur more often in high-anxiety dogs, perhaps because they tend to gulp in lots of air when they pant. Veterinarians suspect that excess air in a dog’s stomach may cause it to twist.

The disease probably involves a variety of genes as well as environmental and dietary influences “that push the dog over the edge from being highly at risk to actually developing the disease,” she says.

Sharp and Rozanski also will collect blood and abdominal tissue samples from canine patients with and without bloat to determine whether certain types or amounts of proteins, hormones and other molecules in blood and tissues can predict which dogs will get the disease.

“We are confident that a significant amount of risk for bloat will be explained purely by genetics,” and thus provide data to develop a test for the disease, says Sharp.

A genetic test could determine which dogs are at highest risk of developing bloat. At-risk dogs could undergo preventive surgery known as gastropexy to affix the stomach to the abdominal wall so it can’t twist. It would also be a breakthrough for the dog-breeding community, Sharp says. “A genetic test would help them dramatically reduce the likelihood of bloat in future offspring.”

If you have a dog that has had bloat and would like to contribute DNA to the study, please email Claire Sharp at claire.sharp@tufts.edu.