The Difficult Life of Ludwig

Ludwig van Beethoven was an often unpleasant and always unhappy man, notoriously unkempt and suffering from chronic diarrhea, liver disease and depression. He lived in squalor, was once observed keeping an unemptied chamber pot under his piano. He was paranoid, certain everyone was cheating him, and he failed at most relationships. And still, he wrote some of the most glorious and uplifting music in history.

“He was all about serving humanity, but it was actual people he didn’t like,” says Jan Swafford, a lecturer in the English department and author of the book Beethoven: Anguish and Triumph (Houghton Mifflin Harcourt, 2014). A composer himself, Swafford has also written biographies of Charles Ives and Johannes Brahms.

Weighing in at nearly 1,000 pages, Beethoven took about a decade to research and write. Why undertake such a massive project? Swafford says there will always be more works about the great composer, but that in the last 50 years, most books about Beethoven, who lived from 1770 to 1827, have been academic studies. He wanted to focus on the story—the drama—of Beethoven.

When he begins his research, Swafford says, he tries to clear his mind about what he knows about a subject and start with a blank slate. He also makes the point that he’s not trying to put his subjects on the analyst’s couch. “I don’t think biography is an interpretation of a life,” he says. “I think it’s a narrative.” 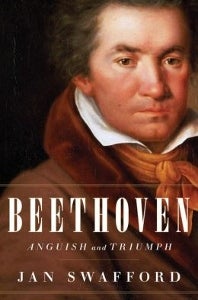 In Beethoven’s case, the narrative is about a clearly talented child whose teacher told him he would be the next Mozart. Beethoven, says Swafford, had the talent, but not, like Mozart, a father who was a teacher and author of a celebrated violin method. Still, by the age of 20, Beethoven was considered one of the greatest pianists of his time.

His childhood was dominated by his father, a tough taskmaster and an alcoholic. He would come home drunk, drag the young Beethoven out of bed and make him play the piano. After his wife died, the father, says Swafford, would sometimes be found in the gutter, and his children had to persuade the police not to arrest him. As his father declined, Beethoven took over the role of wage earner and caretaker of the family. He also assumed his father’s controlling and domineering ways.

Portraits of Beethoven show a scowling man, but Swafford says they are inaccurate; his face was described as usually impassive. He was not able to respond to how others thought or viewed the world. “Most people realize other people have different feelings, different ideas. He couldn’t see that,” says Swafford.

Music in His Mind

By his mid-20s, Beethoven had started to lose his hearing. Swafford says one leading theory about why he went deaf is that, like his father, Beethoven drank a good amount of wine, and cheap wines at that time were sometimes laced with lead to make them sweeter—that can wreck your gut and also affect hearing. Deafness led to further isolation for a man who was already depressed and had alienated his friends and relatives.

“In the face of the trauma of loss of hearing, he had to cope,” Swafford says. “He was outsized in his response to everything, so when life threw him the worst thing in the world, he became even more productive.”

Between 1805 and 1811, Beethoven composed some of his greatest works, including three symphonies as well as piano concertos, overtures and quartets. He was able to hear the music in his head and improvised on piano even when he could not hear it. Improvisation was his main creative engine.

When Beethoven could no longer hear conversations, he carried notebooks in which people would write down their side of the conversation. He never threw anything away, so most of the notebooks survive. Swafford read many of them, along with numerous other articles and books. He realized that it would be impossible to read everything by and about Beethoven.

“With Brahms and Ives, I could just about read everything out there. With Beethoven, I had to make decisions about what to read. Take the Appassionata Sonata, one of his most famous pieces: there are 200 articles about just that piece alone.”

Swafford describes Beethoven’s compositions in detail, sometimes with musical notations that non-musicians might not be able to follow. Though the Beethoven is a print and Kindle publication, he has thought of producing an online book with links to music.

“It would be wonderful for the reader to hear what you are describing—all you need is a snippet. I still believe in print books, but if you’re going to be reading on a computer or iPad, you may as well have the music and not have to find it yourself,” he says. (Swafford has written numerous articles for the online magazine Slate, which does just that.)

He doesn’t choose minor figures to profile—his next biography will be about Mozart. He will begin the way he starts each book: He will wipe the slate clean, create a simple chronology, then type up hundreds of pages of Mozart's letters. “By the time you do that, you have a sense of how someone talks and thinks.”

For now, Beethoven, with his difficult life and magnificent music, still occupies Swafford. “The essence of Beethoven is more,” he says. “He took the past and did everything more: more contrast, more intensity, longer pieces. He used Haydn and Mozart’s forms, but made more out of the development, more out of the coda, and the orchestra got bigger.”

A man who was unable to relate to other people and was sick and deaf for much of his life, Beethoven managed to surmount his difficulties and write some of the greatest music ever written.

“Despite Beethoven’s personal unhappiness,” says Swafford, “he put joy and consolation into his music with endless generosity.”

Does music sound better on vinyl records than on CDs?

A Professor Turns to the Dark Side