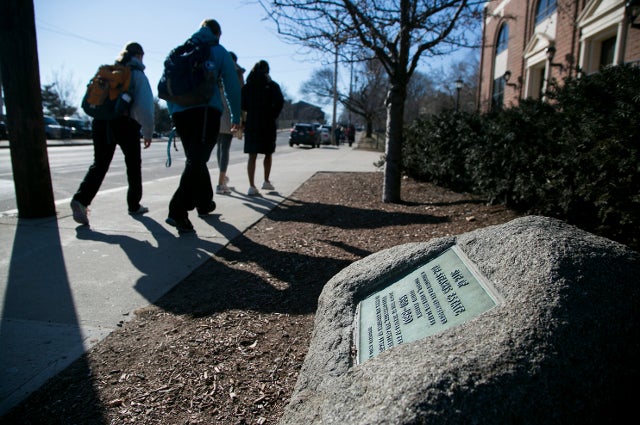 Scattered around Tufts’ three campuses are historical markers that often go unnoticed, hidden among the pathways that many of us travel regularly or in the buildings where we study and work. In this new series, “Mark the Spot,” Tufts Now explores the stories behind these snippets of university history.

Every day as they walk along College Avenue to get to the Tisch Sports and Fitness Center from the Hill, hundreds of people pass a large stone with a green copper plaque in front of Cousens Gym.

It marks the site of the Stearns Estate, a way station on the Underground Railroad—a network of safe houses and secret routes that slaves used to escape to free states in the North and Canada between 1850 and 1860. George Luther Stearns (1809–1867), a wealthy Medford merchant, was an ardent abolitionist who provided financial support to a variety of causes to end slavery. After the Civil War, he became involved in efforts to aid freed slaves. Photo: Kelvin Ma
Before the Civil War, Stearns helped finance the New England Emigrant Aid Co., a transportation company based in Boston that would send people to what was then the Kansas Territory. The goal was to tilt the Kansas population so that more people living there were opponents of slavery, meaning that Kansas could enter the United States as a free state. In 1859, Stearns was one of the Secret Six, a group that aided John Brown in his failed raid at Harpers Ferry seeking to spark a slave insurrection.

Stearns recruited thousands of freed slaves to fight in the Union Army, helped establish schools for their children and found work for their families while they served. After the war, he helped establish the Freedman’s Bureau, which provided health care, employment and education to former slaves.

Ralph Waldo Emerson delivered the eulogy at Stearns’ funeral. He ended his tribute by saying, “Be not too proud in your grief when you remember that there is not a town in the remote State of Kansas that will not weep with you as at the loss of its founder; not a Southern State in which the freedmen will not learn today from their preachers that one of their most efficient benefactors has departed and will cover his memory with benedictions; and that, after all his efforts to serve men without appearing to do so, there is hardly a man in this country worth knowing who does not hold his name in exceptional honor.”