A World of Music

Musician Joel LaRue Smith is at home playing many flavors of jazz, and now brings the form to a new musical 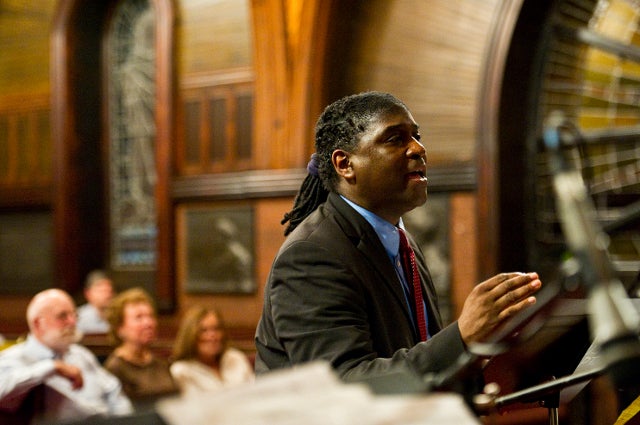 Joel LaRue Smith wants to make sure his audiences can feel the rhythm and movement in his music. “There’s got to be some oomcha in it,” he says, emphasizing the oom while drumming his fingers on a table. “OOMcha, OOMcha, OOMcha.”

His latest project is also designed to make listeners think. A full-time lecturer in music at Tufts, Smith is one of two composers for a new musical based on an improbable muse: the arrest of African-American scholar Henry Louis Gates Jr. at his home in Cambridge, Massachusetts, in 2009.

“I think anything could be put to music,” says Smith, who directs the Tufts Jazz Orchestra. “The idea is to incorporate music so that it is accessible without being heavy-handed. I don’t think the show was created to point fingers, but to make people think about issues of race, justice and bias.”

The musical, A Pint of Understanding, dramatizes the arrest that occurred after a neighbor who didn’t know Gates called Cambridge police to report a possible break-in. Gates, a professor at Harvard, had returned from a trip, and when he found his front door jammed, he tried to jimmy it. Sgt. James Crowley, who is white, confronted the irate professor, who eventually was handcuffed and charged with disorderly conduct. The incident launched a national discussion about racial profiling, and President Barack Obama invited Gates and Crowley to the White House to talk over a beer—hence the title of the musical.

The story and lyrics are by Lee Phenner, a writer and poet who lives in Arlington, Massachusetts. Phenner wanted to produce the musical in collaboration with creative and artistic people from different backgrounds. She landed on Smith’s website  and listened to music by a trio in which Smith performs—a lively fusion of jazz and Afro-Caribbean sounds with syncopated rhythms and a clean piano line.

Phenner hosted a listening party for some of her collaborators, including composer Joseph Smith (no relation), who has worked on a number film and television projects. They liked what they heard, and invited Joel Smith to join them.

Smith is enjoying the collaboration. “The differences in styles make for variety and openness in the music,” he says. “There are many times in film or television where there are multiple composers for one work of art.”

Smith is used to taking unusual turns, much as he might switch tempos in his compositions. He grew up in Bayside, New York, one of 10 children. He fell in love with the piano when visiting his grandparents’ home in Louisiana and was able to play by ear. His parents promptly bought a piano, and he began private lessons at age 9.  In middle school and high school he studied music history and theory and learned about jazz, Latin and gospel—now his specialties—informally. He attended the High School of Performing Arts, where the focus was on classical music.

He played piano for gospel church services and joined his Cuban and Puerto Rican neighbors in Queens for informal sessions of Latin music when they picked up the timbales and percussion. Later he studied Latin piano and Afro-Cuban music at the Harlem School of Music and with Cuban musician Mario Bauza. He taught himself jazz as a child and teenager, and would transcribe solos performed by jazz pianists.

“If you wanted to play jazz, you had to do it on your own,” he says. “I learned it in the authentic way, which was in the streets or in church or just listening to CDs.”

After graduating from City College and then the Manhattan School of Music in 1996, Smith was offered a job at Tufts for two days a week. The following year, he became a full-time lecturer. His wife, Cynthia Smith, is a lecturer in the Eliot-Pearson Department of Child Study and Human Development.

He divides his time between touring with the Joel Larue Smith Trio and teaching and performing with groups at Tufts, in Boston and around the world. He has taken the Tufts Jazz Orchestra to Cuba, Portugal, the Czech Republic, Bulgaria and Costa Rica.

As for A Pint of Understanding, Phenner and her colleagues performed a run-through at Tufts’ Granoff Music Center last May. Later this month, they will hold a developmental workshop, which will include the performance and a post-production discussion. That takes place on Friday, Feb. 27, at 7 p.m. at Emerson College’s Bill Bordy Theater, 216 Tremont St. in Boston. Admission is free.

Get ready for plenty of OOMcha.