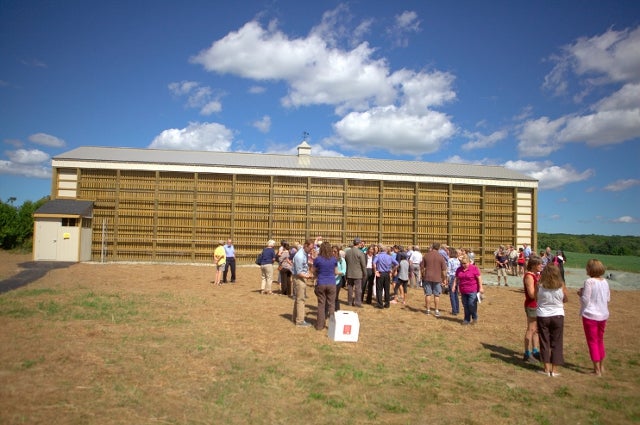 The small crowd grew silent as the red-tailed hawk emerged from its carrier, shook its russet feathers and soared into the bright afternoon sky, landing on a branch at the edge of the distant woods. The people cheered—it was wild again. Bird releases at Cummings School always bring relief and elation. But this one, on Sept. 7, brought a double dose of joy because it celebrated a new flight cage for rehabilitating injured birds.

The Shalin Liu Healing Cage is named for longtime Cummings School friend Shalin Liu; her leadership gift, along with a generous gift from Judy Cook, another friend of the school, made the new building possible.

The flight cage is a “game changer” that will help the school’s Wildlife Clinic streamline the process of releasing birds it has cared for, says Flo Tseng, clinic director. “We’ll be able to double our capacity to help birds of prey get the conditioning they need sooner and, as a result, get them out of captivity quicker,” she says. “We were often so backed up that animals had to stay in smaller cages longer than they should, which is stressful for a bird that wants to be free.”

The airy, barn-like structure is large enough to allow raptors to test—and strengthen—their wings. It sits next to its twin, the school’s first flight barn, which has been in constant use since it opened in 2000 on the school’s campus in North Grafton, Massachusetts. A third, smaller cage helps handle the overflow. A recent gift from Douglas Payne, a surgeon at Tufts Medical Center and a member of Cummings School’s board of advisors, and his wife, Geri, funded much-needed renovations to that cage.

The need for avian rehabilitation facilities continues to grow, Tseng says. The Wildlife Clinic sees about 2,000 animals each year, 65 percent of them birds.

Regardless of what injury or disease brings birds to the clinic, all need aerobic conditioning to build up their muscles before they can again thrive in the wild. Raptors have to be extremely fit to migrate and catch prey. “The birds that need conditioning the most have wing injuries,” says Tseng. “We observe them to make sure they meet specific criteria before they are released, like being able to land on perches, flying back and forth a certain number of times and flying without fatigue.”

Liu, founder of the Summer Star Foundation for Nature, Art and Humanity, supports such causes as environmental and cultural programs and early childhood education. The healing cage is a piece of one of her most ambitious projects, the Summer Star Wildlife Sanctuary, which opened in September in Boylston, Massachusetts. The visitors’ center at the sanctuary will feature a live video feed from the cage that will help further educational partnerships involving Cummings School faculty and students.

Mark Pokras, V84, an associate professor and former director of the Wildlife Clinic, admires Liu’s vision for healing the world. “Shalin sees the world in a different way than most,” he says. “She is looking at the sore spots in the world and asking, ‘What can I do to improve the quality of life for vulnerable populations?’ The healing cage is a response to that sensitive question.”

At the dedication, Liu shared her concern for sustaining human life in harmony with the wild. “I am touched not only by this building but also by how many people are behind it,” she said. “They deeply believe that wildlife is something we can all commit to. Wildlife needs our help.”

It wasn’t long before the new healing cage got its first patient, a red-shouldered hawk that suffered a fracture.

“We’ve dreamed of this cage for so long,” Tseng says. “I know the birds are, in their way, grateful, too—they don’t want to be here, after all. They just want to be free, and that’s our mission. I can’t thank Shalin enough for all she has done.”

This article first appeared in the Winter 2015 issue of Cummings Veterinary Medicine magazine.