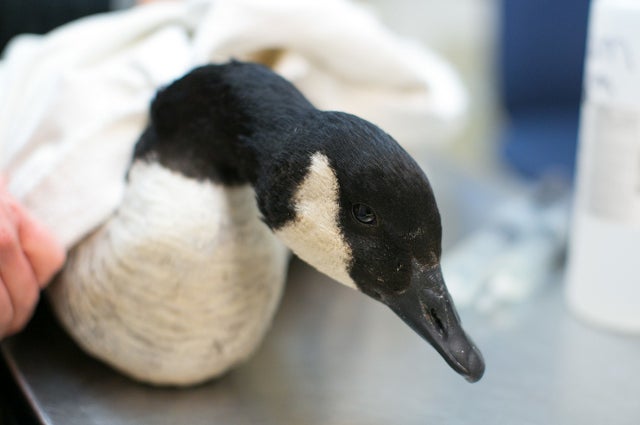 They don’t have to battle leaks from ice dams, wait for commuter trains that never arrive or entertain stir-crazy children like we do, but wild animals are also hurting from this winter’s enormous snow totals and dangerous temperatures.

Veterinarians at Cummings School say it’s the worst winter they’ve ever seen in terms of the number of starving patients arriving at the Tufts Wildlife Clinic in Grafton, Massachusetts. In January and February alone, the clinic treated almost 250 birds and mammals—a 67 percent increase over the number of wildlife treated during the first two months of 2014.

The dramatic jump in the winter caseload has largely been due to an influx of stranded seabirds and struggling waterfowl—they’re coming in at about five times the rate seen in more typical winters. “Most of the birds being brought in have been found in the snow, very thin and unable to fly,” says Jessica Zorge, who manages the intake of wild patients.

Large numbers of loons and other seabirds have been blown inland by the recent storms, says Flo Tseng, director of the Wildlife Clinic. “Seabirds need to take off over bodies of water—they can’t get airborne over solid ground,” she says. “People are finding them everywhere, grounded and starving.”

Many ducks and geese do not migrate south for the winter, Tseng says. These animals are now being found starving, because even normally open bodies of water have frozen over, leaving them without access to food. 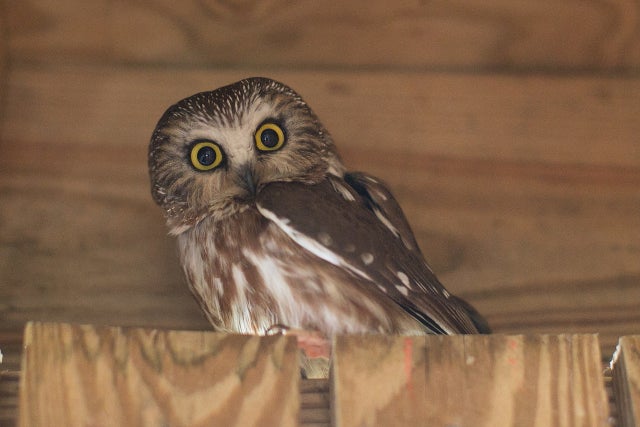 A northern saw-whet owl recovering from a fractured wing stares at the camera while being cared for at the Tufts Wildlife Clinic. Photo: Matthew Healey

The clinic also is seeing an uptick in other wildlife needing help. “We always see a fair number of owls this time of year, but it’s more now,” she says. “When the snowpack is really dense on the fields, owls hunt along roadways, where they are frequently hit by cars, causing trauma to the head, eyes and wings.”

Mammals have also been affected. The Wildlife Clinic is treating an opossum with facial trauma—most likely from being hit by a car—and frostbite on the tips of its toes and tail. “That’s pretty typical,” notes Tseng. “Opossums aren’t really designed for a climate like this,” she says, given that they are native to the southeastern U.S.

Tseng says that a wild animal’s trip to the Tufts clinic is similar to an alien-abduction experience. “Every time we touch a wild animal, it thinks it’s going to be eaten,” she says. But for the hungry ones stranded in snow this winter, “the clinic must feel like the spa. It’s nice and warm. We have a pool room with open water for them to swim in—and all the food they could ever want.” 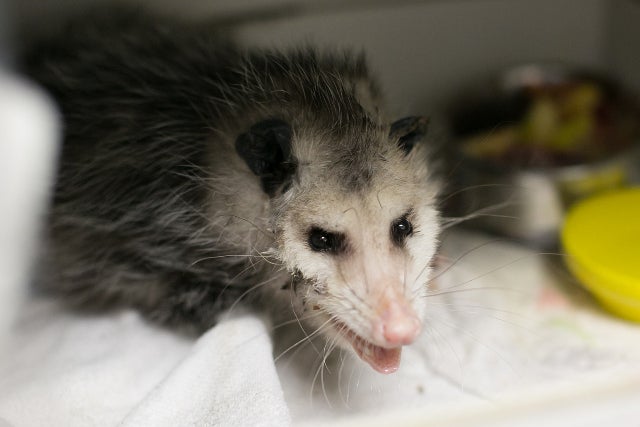 An injured opossum hisses at the photographer from its cage in the Tufts Wildlife Clinic. Photo: Matthew Healey
Most of the starving animals that have been brought in by good Samaritans or animal control officers have a good prognosis. “We fatten them back up and try to return them to more hospitable places, where there are open bodies of water and hopefully more sources of food,” says Tseng. “Some of them end up staying here longer than they’d normally need to just because the weather hasn’t been cooperating. Given the bitter cold recently, we’ve been careful to wait for temperatures to thaw somewhat. We just released three geese, and hopefully they’ll do just fine.”

Many people call the clinic because they are worried about the wildlife in their backyards. Tseng encourages people to keep their bird feeders full until spring, but to be cautious about supplementary feeding. For example, “you can’t just feed ducks and geese bread, because it is not nutritionally sufficient,” she says. “At the clinic, we have access to appropriate foods most people don’t have at home, like a commercial waterfowl maintenance diet and cracked corn. If they can go to a feed store and find appropriate food, then they can help waterfowl by giving them supplemental nutrition.”

If an animal is weak enough for someone to catch, it probably needs rehab, Tseng says. She advises concerned citizens to call their local animal control officer or the Animal Rescue League of Boston for assistance in getting help for ailing wildlife. “The Animal Rescue League has been here pretty much every day this past month, bringing in animals from all over the Boston area,” she says.

Intake papers cover a table in an exam room. Photo: Matthew Healey
Unfortunately, the number of animals needing help will continue to rise until the weather dramatically improves.

“Spring looks like it’s going to be delayed, although no one can say by how long,” says Tseng. “It is straining our resources certainly in terms of space and food, which is costly.” But, she notes, the clinic will not turn any patients away.