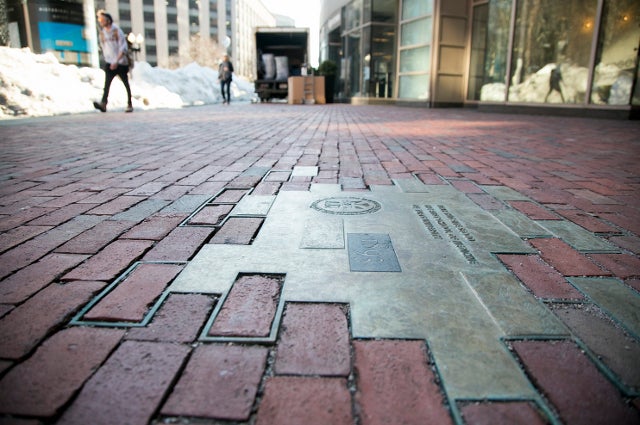 Scattered around Tufts’ three campuses are historical markers that often go unnoticed, hidden among the pathways that many of us travel regularly or in the buildings where we study and work. In this new series, “Mark the Spot,” Tufts Now explores the stories behind these snippets of university history.

A few years back, Henry Banks, M45, who served as dean of Tufts School of Medicine from 1983 to 1990, called the school to report that a historical marker badly needed cleaning. No one but Banks seemed to know anything about the marker, so Stephen Nasson, now the senior director of facilities services at Tufts, took a walk over to 188 Boylston St. with Jim Mooradian, the facilities manager in Boston. They discovered a copper marker, flush with the brick sidewalk, that reads, “Near this site stood the first School of Medicine of Tufts University.”

“I’ve been at the university for 29 years, and thought I knew everything about the health sciences campus,” says Nasson. “We were amazed the marker was there; we had had no idea.” 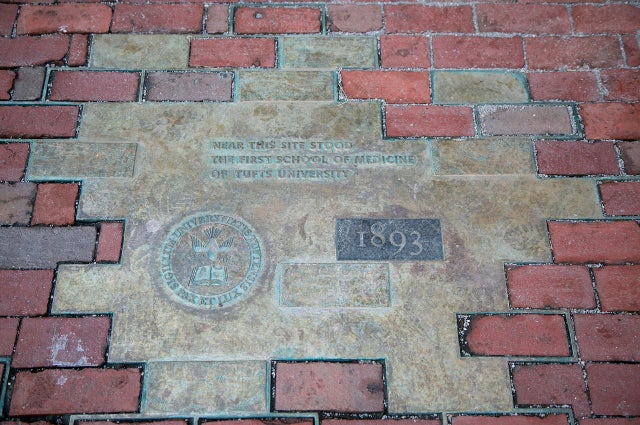 Photo: Kelvin Ma
The marker denotes the medical school’s original location when it opened for business in 1893—on land now occupied by the Four Seasons Hotel. The school had 80 students, seven faculty members and quite a progressive gender balance for its time: 23 women and 57 men. The medical school was the first graduate program offered by Tufts College.

Just four years later, having outgrown its quarters, the medical school relocated to a remodeled Baptist church on Shawmut Avenue. In 1900 the medical school moved to 416 Huntington Ave., along with the dental school. The School of Medicine has been at its current location on Harrison Avenue since 1949.

Nasson is mindful of tending the university’s history: just as families polish the silver for company, the Boston facilities crew now gives the copper marker an annual cleaning. “To me, it’s a hidden gem,” he says.