Hidden Talents: Nights at the Opera

By day a Tufts staffer, Caitlin Felsman, A09, is also making a name for herself on the operatic stage 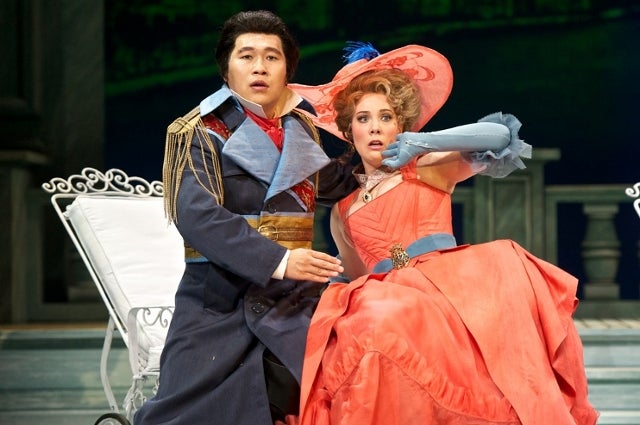 If you scan Caitlin Felsman’s bookshelves, you’ll get an idea of how she prepares for her opera roles: poems by Emily Dickinson, dictionaries in six languages, German poetry, books on acting, history and music. That eclectic collection is a sign that opera may be the art form that makes the most demands on its practitioners, requiring musical talent, the ability to pronounce—if not speak—other languages, a familiarity with history and drama, physical stamina and acting talent.

During the day, Felsman, A09, is the communications specialist in the Office of Undergraduate and Graduate Education, where she edits a newsletter for parents, develops websites and manages a social media account. When the day is done, she turns her attention to opera. Felsman is a lyric mezzo soprano and practices three hours a day. When luck, talent and all the hard work align, she performs in the evenings and on weekends. She has performed around the country as well as in Europe and in southern Africa.

“My mom would tell you I came singing out of the womb,” says Felsman, 27. Although she sang as a child, and later performed with a touring music group, Felsman didn’t plan on a professional career until she came to Tufts, majoring in music and anthropology.

She thought she would pursue an academic career as a professor or researcher. Her parents worked in global public health, specializing in child protection, mostly in Asia and Africa. Felsman was born in the Philippines, but calls Harare, the capital of Zimbabwe, her hometown, since that’s where she spent most of her childhood.

Music was a constant in her life. She sang in choirs and in musical theater in middle and high school, and toured with Village Harmony, a music camp for teenagers who perform in Africa, Europe and the United States.

Felsman chose Tufts because she was looking for a place where someone with an international background would feel comfortable. “I wanted to study culture and how music is used in revolutions,” she says. “I had grown up hearing anti-apartheid music from South Africa and was fascinated by what a great role music played.”

But she missed singing, so she signed on for lessons with Carol Mastrodomenico, director of the Tufts Opera Ensemble. For one performance, Mastrodomenico asked Felsman to take on the role of the maid in Menotti’s Amelia Goes to the Ball. It made her realize how much she had missed singing. Felsman continued taking lessons and performing with the ensemble, and after two summers at an opera program in Italy, she set her sights on a music career.

Besides reading, studying and practicing, Felsman is a regular at the gym to keep in performance shape. Opera, she says, is the Olympics of singing—with no amplification, singers rely on their voices to project over a large orchestra. That means constantly stretching back and abdominal muscles to breathe properly, and to keep from tiring over the course of an opera that may last several hours.

“I spend a lot of time working on breath technique and see a vocal breathing specialist once a month,” says Felsman. “When I’m preparing to sing a full role, I’m very conscious about how much energy it’s going to take to sing with the right technique and also be able to move around stage. It requires full attention physically and emotionally to give a complete performance.”

She auditions for opera roles 25 to 30 times a year, primarily in New York City, since opera companies from around the country travel there to hear singers. But winning parts is highly competitive and she has learned to live with disappointment.

“When the instrument is inside your body, it feels like the rejection is a rejection of one’s self,” she says. “I spend a lot of time reminding myself it’s not personal. I could be the wrong height or not blend well with the tenor. There are a million circumstances.”

She feels lucky that her husband understands the rigors of performance art. While performing in the opera Passion as an undergraduate, Felsman met Michael Pfitzer, A09, then a student conductor, and now her husband. Both went on to graduate school, Felsman earning a master’s in vocal performance from the University of Texas at Austin and Pfitzer a master’s degree in choral conducting at the University of Wisconsin. Pfitzer serves as the choral associate at Harvard and is music director for a church in Stow, Massachusetts.

“Michael understands what I’m going through, which is really helpful when it feels hard,” Felsman says. “It would be difficult to be with someone who didn’t understand that. Michael has had to audition in front of a full choir of perhaps 100 people, so he knows what it’s like.”

And then there are the financial sacrifices. “Being a young singer is extremely expensive,” Felsman says. “You pay from $25 to $100 per audition. Imagine paying every time you had a job interview or sent out a resume.” Then there are the costs of gowns needed for performances, as well as lessons and coaching.

The thrill of stepping on stage eclipses all of that. When Felsman made her professional debut in November 2011, singing in The Magic Flute with the Austin Lyric Opera, she burst into tears during a rehearsal. An older colleague asked if she was okay.

“I explained that I was so grateful to be a part of something so beautiful, and asked if that feeling ever got old,” Felsman says. “She smiled and said, ‘No, it never gets old. It’s always this exciting.’ That’s when I knew I was totally hooked.”

Felsman will be performing as the mezzo soprano soloist for the Tufts Chorale performance of Mozart’s Requiem on April 12 at 3 p.m. at Distler Hall, in the first Alumni Choral Weekend. Tufts alumni who participated in music-making in the department are encouraged to come back to campus to rehearse and perform with the Concert Choir, Chamber Singers, soloists and full orchestra. To receive registration information to participate as chorus members, alumni may contact the Tufts Chorale executive board at tuftschoralalum​ni@gmail.com.