The number of wounded and killed in conflicts is almost always hard to determine and easy to manipulate, says Tufts political scientist

The Islamist insurgent group Boko Haram attacked the fishing village of Baga in northeastern Nigeria in early January. Initial reports said 150 people died, although later accounts listed the number killed at 2,000, a discrepancy that went unexplained in some of the media coverage.

Finding reliable numbers of casualties stemming from conflict and war is difficult, if not impossible, says Kelly M. Greenhill, an associate professor of political science in the School of Arts and Sciences. There are many reasons for that, she says, ranging from challenges faced by observers who may have to travel to remote or dangerous places to figure out what happened, to governments and other forces that have motives to inflate—or deflate—casualty numbers.

Greenhill, co-editor of Sex, Drugs and Body Counts: The Politics of Numbers in Global Crime and Conflict (Cornell University Press, 2010), addressed the incongruity in casualty figures in Nigeria in a Foreign Affairs article in February. She spoke to Tufts Now about the Boko Haram incident and the overall challenge of understanding casualty reports in a time of increasing political violence.

Tufts Now: How are casualties counted in conflicts like the Boko Haram insurgency? 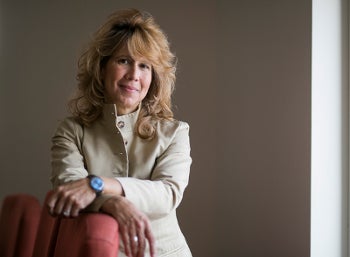 “By definition, casualties happen in environments that are dangerous and difficult to access—these areas may still be under fire,” says Kelly M. Greenhill. Photo: Kelvin Ma
data that is generated by others, whether it’s the media or morgues or the government, and then trying to verify those numbers. It tends to lead to lower aggregate estimates than active surveillance, in which counting is done dynamically.

In active surveillance, observers may, for instance, undertake household surveys by asking whether people know if anyone died, or if anyone in their household or extended family died. If those doing the counting are judicious, they will employ established sampling techniques to make sure they have a representative sample of the population.

Why is it difficult to get accurate death toll numbers?

In addition, local institutions responsible for counting the dead may be compromised already; hospitals and morgues and law enforcement entities may be ill-equipped—or corrupt. In some places, the people who are in charge of counting are not necessarily qualified to do so, and sometimes there weren’t good numbers about a particular population before the conflict broke out, making it more difficult to figure out how many people died. In Baga, for example, some officials said there was a population of 10,000 before the attack, but it’s not known how they came up with this number.

What are some other factors?

People can disappear in the midst of conflict. They may flee and are assumed to be dead. Finally, there can be different definitions of who constitutes a casualty of conflict. Are we talking about everyone in a war zone, or just combatants? Or are we talking about only noncombatants? Are deaths being counted that are only related to battles? Or are deaths due to conflict-related disease or famine being included?

Studies have shown that eyewitnesses can provide false or biased accounts. Cultural considerations—differences in storytelling, for example—may be one likely factor. Another is the emotional aspect of providing testimony. Whether due to ego, embarrassment or fear, witnesses may lie or fabricate answers to protect themselves from harm. They may also concoct or embellish answers if they believe they will be rewarded for doing so.

It sounds like there is room, too, for intentional manipulation of the numbers.

Those involved may have incentives to hide, undercount or downplay casualties, or conversely, to inflate the damage inflicted. There are incentives in place in different conflicts to justify action or avoid taking action. For Boko Haram, it’s a mixed bag. If they are trying to win adherents to their cause, it doesn’t look great if they are engaged in indiscriminate violence. On the other hand, larger death tolls can make them look more powerful.

The Nigerian government, meanwhile, has an interest in making Boko Haram seem less a threat than it might be objectively—otherwise it looks incompetent and unable to keep its people secure. So it has incentives to keep casualty numbers as low as possible.

Have numbers been manipulated elsewhere?

Yes. At the outset of the conflict in Syria we saw signs of both intentional inflation and deflation when it was thought that high casualty numbers might provoke intervention for humanitarian reasons. But when such an intervention didn’t happen, counting the number of casualties went on the back burner.

Counting the dead is similar to making crowd estimates. If you’re the government and don’t want to say there’s been a riot, you might say there were a couple of dozen disgruntled people demonstrating, versus the hundreds or thousands that were really there.

Are these kinds of discrepancies common?

It happens all the time. The Rwandan genocide in 1994 provided a great contrast in numbers. Even more than two decades after the tragedy, there isn’t convergence; estimates of the number killed still range from 500,000 to over 1 million.

In Iraq the number of reported civilian casualties between the 2003 U.S.-led invasion and the troop drawdown in 2011 has ranged from 160,000 to 1.2 million, though the latter number has been largely discredited by sources within governments, academia and the international media.  There continue to be debates about the numbers.

Yet in the media, the casualty figures sound definitive.

Quite often when a number is repeated, its credibility grows, even though there is no objective reason for it. Once a number is introduced, others will pick it up if it is cited or used by a credible source. Some will say that they saw it on the BBC website or read it in the New York Times, and that those are reliable sources. Such figures can be accurate, but they can also be just guesstimates, or even intentional fabrications, by politically motivated actors inside or outside governments..

Yes. The claim that 250,000 people had been killed during the war in Bosnia originated with a government official who tossed it out as his best guess over a cup of coffee one day while the war was still raging. Although it was not based in fact, it became a widely cited and effectively official number. We know now that the real number was about 100,000—still a huge number, but very different from 250,000.

What can those in the media do to verify casualty numbers?

Question everything. For those producing the numbers or reporting them, ask hard questions: Where do the numbers come from? How did you verify them? What methodology did you use? If you are estimating, then tell us.

What can we do as consumers of news and information?

As news consumers, we should be skeptical. But we can also pay attention to an issue based on factors other than numbers.