Growing the Stuff of Life 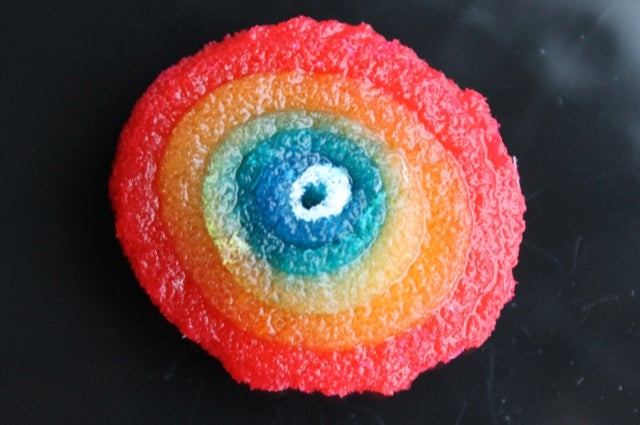 Few organs in the body are as complicated as the human brain, a tight spiderweb of neurons that shoots electrical signals across synapses to control all our thoughts and movements. When something goes wrong—as it does when a person suffers a traumatic brain injury—the effects can be devastating. But for decades, scientists have been stymied in trying to study the living brain in the laboratory.

Tufts researchers made a major leap forward in that understanding last year by doing the seemingly impossible: growing living brain tissue outside of the body and then keeping it alive for months. They did it by constructing a scaffolding out of silk and collagen proteins and impregnating it with brain cells derived from rats. The cells were then able to grow into the proper complex arrangement.

“We did not know how to direct the process, so we allowed the cells to do it themselves,” explains David Kaplan, director of the Tissue Engineering Research Center (TERC) based at Tufts, which has been instrumental in efforts to grow body tissues for more than a decade. “But we had to create the conditions that made the cells want to do it.”

That involved making hundreds of round, hollow “donuts” of porous silk sponges to simulate the structure of cortical tissue, and then filling them with a collagen protein gel, with the entire structure bathed in a complex chemical solution that could keep the neural cells alive. The neural cells grew around the scaffolding to create functional neural networks in a remarkably stable structure. 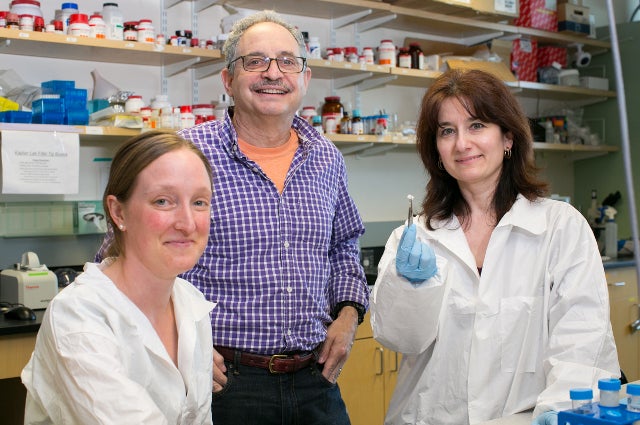 Research assistant and TERC coordinator Jodie Giordano (from left), David Kaplan and research assistant Rucsanda Carmen Preda. Photo: Matthew Healey
“The tissue can live for at least two months with these systems,” says Kaplan, the Stern Family Professor of Engineering and chair of the Department of Biomedical Engineering, speaking in his lab on the second floor of Tufts’ Science and Technology Center. Already students in the lab have used the tissue to study traumatic brain injury by dropping a heavy weight on the tissue and then analyzing the chemical and electrical changes in the cells.

In addition, TERC is using its tissue materials to engineer three-dimensional laboratory models of various organs that can be used for toxicology or drug testing.

“These approaches fill an important need prior to moving to human clinical testing while also reducing the need to conduct animal studies,” says Kaplan. “This not only reduces animal use in research, but also reduces costs and provides data that is more relevant to human conditions.”

Such advances are just a few of the many that TERC has made over the past 11 years, as it has become a nationally recognized innovator in the complex field of tissue engineering and regenerative medicine. “We don’t have any other center focused in this way,” says Rosemarie Hunziker, director of tissue engineering and regenerative medicine at the National Institutes of Health (NIH). “The number of developments that have come out of it over the years is dizzying.”

Kaplan came up with the idea for the center back in 2001, when he was experimenting with silk as a potential material for tissue development. Creating tissues—either for studying diseases outside the body or for transplantation inside the body—is a complex process, requiring three equally important parts: the cells themselves, usually stem cells that can undergo distinct growth patterns; the scaffolding, or biomaterial, that gives the tissue structure—in Kaplan’s case, usually silk; and the liquid chemical environment, or bioreactor, that provides the right conditions for growth.

“It’s very hard for a single lab to put together the resources to do that in a broad way,” says Kaplan.

When he heard about grants from the NIH to establish so-called Biotechnology Research and Development Centers, he reached out to his colleague Gordana Vunjak-Novakovic, an expert on bioreactors, then at the Massachusetts Institute of Technology, to jointly propose a center to the NIH. “At that time, there was no centralized resource in the country for research, service and training in tissue engineering,” remembers Vunjak-Novakovic, the center’s associate director.

The NIH approved the proposal, dubbing TERC a regional hub for tissue research that could in turn push the entire field forward. “There is a dual purpose, which is to do cutting-edge research, but also to make sure that the research gets disseminated and the community has access to it,” says Hunziker.

Founded in 2004, TERC now in part inhabits two floors of labs and office space in the Tufts Science and Technology Center. It first concentrated on making simple tissues, such as bones and cartilage, and examining how they responded to infections or other processes to simulate disease. As researchers at TERC have mastered the basics of tissue creation, they have expanded in recent years into making more complex tissues, including kidney, intestinal, heart, lung and brain tissues, that involve multiple cell types, and sophisticated biomaterials and bioreactors.

“Our main challenge is to define what exactly needs to be reproduced, rather than how to do it,” says Vunjak-Novakovic. That is, she says, the lab must figure out the right combination of conditions that makes tissues grow best. A year after the center was founded, Vunjak-Novakovic moved to Columbia University, and now the researchers collaborate by teleconferencing and making periodic trips between Medford and New York.

Much of the success of the center is due to the amazing properties of silk. Kaplan’s eyes light up when he talks about the wonder material. “Every year we learn something new about it. You can make it mechanically match everything from bone tissue to brain tissue,” he enthuses. “It’s biocompatible, FDA approved and degradable in the human body.” 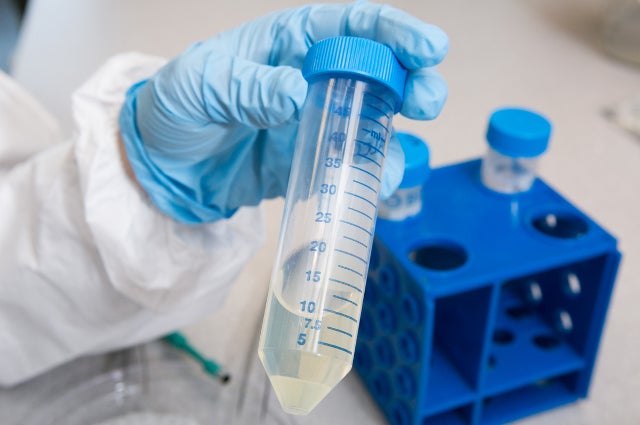 Silk protein solution, the building block for work at the Tissue Engineering Research Center. The materials could be used to build lab models of organs for toxicology and drug testing, potentially eliminating animal testing. Photo: Matthew Healey
In a room down the hall from Kaplan’s office, research assistant Rucsanda Carmen Preda demonstrates silk’s versatility with samples she keeps in a small wicker basket. The lab buys thousands of small, yellowish silkworm cocoons at a time from Japan, and cuts them up into pieces smaller than a fingernail.

“They are boiled in a weak solution of sodium carbonate, which dissolves sericin, one of the two major proteins that make up the cocoon,” says Preda. The silk fibers are then further dissolved to create a yellow aqueous solution that is stored in laboratory refrigerators and then shaped by researchers into various forms, including soft sponges and hard discs.

Fulfilling its mission of disseminating research, the lab supplies silk proteins to scientists around the world, and regularly hosts scientists for periods of a few days to a few months to learn how to replicate the process. “We even had visitors from Australia who were here for six months,” says Preda.

While many of the tissues the center produces are used to study diseases, including cancer, obesity and a bone disease called osteogenesis imperfecta, the lab had its sights set on practical applications from the beginning.

Soon after the center’s founding, doctoral student Greg Altman, A97, G02, started a company to develop ligaments from silk. It was bought in 2010 by Allergan, which is now using it to develop technology for breast tissue reconstruction. Altman has spun his expertise into creating a line of skin-care products through his new company, Silk Therapeutics. Two former postdoctoral associates who worked with Kaplan, Mike Lovett, E09, and Tuna Yucel, have created their own company, Ekteino, which is developing implantable silk devices to slowly deliver drugs used to treat chronic diseases.

TERC also works with doctors to try and solve medical problems they present to the center. “We work with clinicians around Boston and around the world who contact us and ask if we can make specific types of medicals,” says Kaplan. “So our students will take on the challenge of making prototypes using the biomaterials in the center.”

Among their recent developments are silk screws made for pediatric bone surgery at Beth Israel Hospital and Boston Children’s Hospital. They could be an improvement over steel or titanium screws, given the speed at which children’s bones grow. The silk screws are strong enough to hold bones together, but also degrade over time as the bone tissue regrows.

Josh Mauney, E99, E04, an assistant professor of surgery at Harvard Medical School and a staff scientist at Children’s, has developed technology for organ reconstruction with TERC. Children who come into the hospital with bladder abnormalities often have a piece of intestine implanted into the bladder to increase its capacity. While the procedure helps reduce high bladder pressures, it is fraught with complications that cause extensive hospital stays over time. 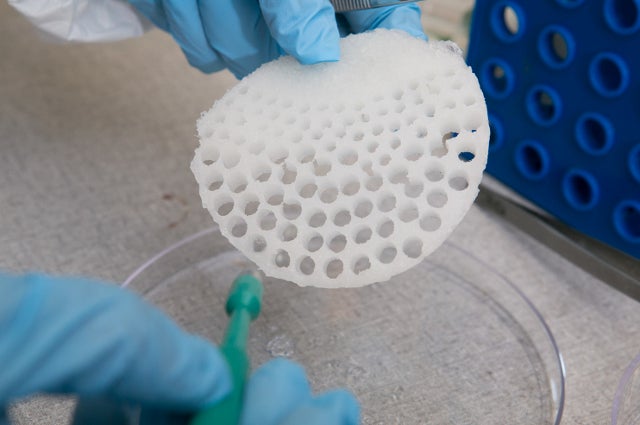 Rucsanda Carmen Preda shows 3D scaffolding made from silk protein solution in one of the labs at the Tissue Engineering Research Center. Photo: Matthew Healey
Mauney is working on an “off-the-shelf” silk-based graft that could be inserted into the bladder instead, and embedded with proteins to stimulate the growth of new, healthy tissue—preventing complications and saving lives.

“This has high potential, especially in a pediatric hospital where kids are suffering from a lot of these congenital abnormalities,” he says. “TERC has been instrumental, not only in assisting with scaffolding design, but also in performing mechanical analyses to see if the regenerated tissue has the same properties as healthy tissue.”

Mauney anticipates the graft could be used in human trials with children in about five years, and could eventually be used in other parts of the body, including the urethra and digestive tract. Such a timetable is lightning fast in the world of clinical medicine—but possible since silk is already approved by the FDA as safe for the body for some applications.

In all of the areas where TERC is doing research—producing tissues that will be inserted into the human body, and creating tissues to replicate human organs in the lab—it continues to break new ground, all thanks to the amazing properties of silk that the researchers have been able to exploit.

“One of the glaring needs in the field for a long time has been the need for a better biomaterial,” says Kaplan. “That is a niche we have really filled.”