More Select than Ever

Tufts’ undergraduate Class of 2019 has a record-low acceptance rate of 15.8 percent 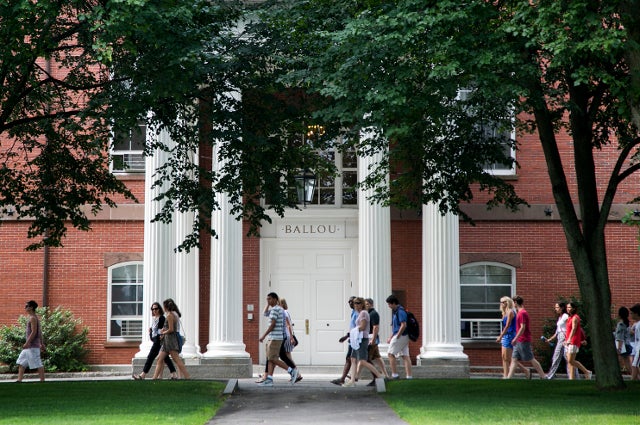 Tufts is harder than ever to get into, as the students applying to be part of the undergraduate Class of 2019 found out this week. Only 15.8 percent received the happy news that they had been accepted, setting a new record for the university in terms of selectivity. Last year the acceptance rate was 17 percent, and five years ago it was 25 percent.

“The acceptance rate is a function of applications volume, the number of seats in the class and the projected yield on our offers of admission—the percent of accepted students who decide to enroll,” says Lee Coffin, dean of undergraduate admissions. Over the past five years, more accepted students than ever have opted to come to the university, “so the greater selectivity this year is a way to control the size of the enrolling class,” he says.

There were 19,064 students who applied for admission to the class that will matriculate in September, almost exactly the same number as last year.

Acceptances went out to students in all 50 states, plus Washington, D.C., Puerto Rico, the Virgin Islands and Guam, and 75 countries. Massachusetts, New York, California and New Jersey were the top states for accepted students, as they were last year. Following trends of the past few years, the top foreign countries for accepted students were China, India, the United Kingdom, Singapore, Turkey and Canada.

SAT scores continue to be strong. The average scores were comparable to last year’s, at 727 for critical reading and 736 for math.

Of domestic students admitted, some 31 percent self-identified as one or more races other than Caucasian, including Asian Americans, African Americans, Hispanic Americans and Native Americans.

Coffin, who was the first person in his family to go to college, notes that 10 percent of the accepted class is similarly made up of higher education trailblazers. Some 47 percent of accepted students applied for financial aid, comparable to recent years.

In his blog, Coffin notes the downside of heightened selectivity. “Let me be clear: I am not celebrating the fact that Tufts denies so many students. I am simply observing an unavoidable aspect of a ‘most selective’ admissions process. We must say ‘no’ much more often than we say ‘yes,’ even when we want to give an affirmative response,” he writes. “The acceptance rate is a vivid example of supply (1,310 places in our freshman class) and demand (19,064 applicants) in action. And the ‘supply’ is quite special: 74 percent of our applicants were evaluated as qualified for admission to Tufts based on the academic credentials we reviewed. Obviously, Tufts cannot accept that many students.”

Accepted students have until May 1 to make a deposit on their first-semester tuition, letting Tufts know that they will be here in the fall. Open house days for accepted students and their families—known as Jumbo Days—are April 17, 23 and 24. Coffin says he expects to enroll a freshman class of 1,310 students, evenly divided between men and women.