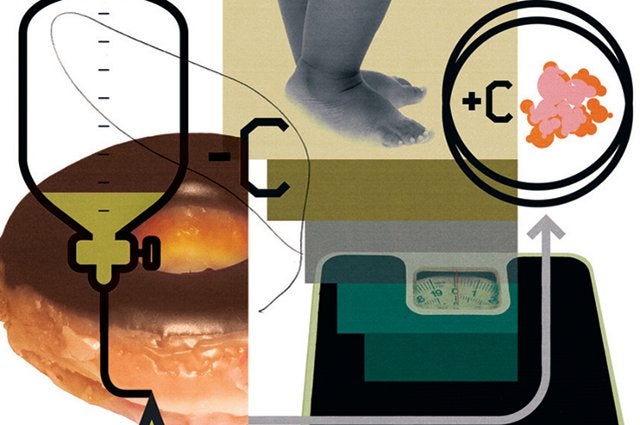 Their 4-year-old son has leukemia and has completed an intensive course of chemotherapy. Finally they get the good news—the cancer is in remission. When is the right time for the doctor to mention that their child is at risk for obesity?

A little weight gain may seem like a small problem after such a crisis, but Assistant Professor Fang Fang Zhang, an epidemiologist at the Friedman School who specializes in the relationship between nutrition and cancer, says that the risk is real and can have harmful consequences.

On top of the many reasons obesity is not good for anyone, pediatric cancer survivors who become obese are more likely to see their cancer return. They are also more prone to chronic health problems than their peers who did not have cancer: They are seven times more likely to die of cardiovascular disease, for example. Obesity adds even more risk, Zhang says.

Unfortunately, survivors of the most common form of childhood cancer, acute lymphoblastic leukemia (ALL), are at a higher risk of developing obesity than other children. In a statistical analysis Zhang and colleagues published in the journal Pediatrics, they found that on average, ALL survivors who had completed treatment within the last 10 years had a substantially higher body mass index than their peers.

The reasons may be many. During treatment, patients are usually given steroids, which increase their appetite. The treatment can also have neurological effects on their motor function, leaving them with less flexibility and less ability to engage in physical activity.

Zhang, an adjunct scientist at the Jean Mayer USDA Human Nutrition Research Center on Aging at Tufts, hypothesizes that parents also become very permissive during treatment, allowing children to eat whatever they crave and spend time in front of the TV. “And this pattern has been kept after the treatment completion,” she says. Parents in one focus group admitted that once they let their child have free reign of sugary treats and salty snacks, “they find it very difficult to change it back.”

Zhang conducted a literature review, published in the International Journal of Child Health and Nutrition, which concluded that the diets of cancer survivors generally do not meet recommended dietary guidelines. She is currently working with St. Jude Children’s Research Hospital in Memphis to analyze dietary data collected from more than 2,500 survivors of childhood cancer to see exactly what they are eating.

One thing she does know is that the children aren’t getting much physical activity. A recent study she conducted with Friedman School Professor Susan Roberts, director of the Energy Metabolism Laboratory at the HNRCA, found that childhood cancer survivors burn 500 fewer calories per day than their peers—a “huge gap,” she says.

Now, the question is whether health-care providers should intervene and let parents know about the obesity risks and what they can do about them. Zhang and colleagues from the Friedman School, the HNRCA, Tufts School of Medicine and Tufts School of Engineering received university funding to design a weight-management program for families with children who have survived cancer. The online program is aimed at educating parents as soon as their child completes cancer treatment, as studies by Zhang and others show a rapid weight gain during—not after—treatment.

The researchers will be assessing whether educating parents contributes to a healthy body weight or other markers of health in the children—children who now, thankfully, have so much life left to live.

“Childhood cancer is the only cancer where we have achieved so much in terms of improving survival,” Zhang says. “Fifty years ago, a diagnosis was almost a death sentence. Now more than 80 percent survive five years or longer. So I think anything we can do to improve their quality of life would have a big impact. And nutrition plays an important role.”

This article first appeared in the Winter 2015 issue of Tufts Nutrition magazine.