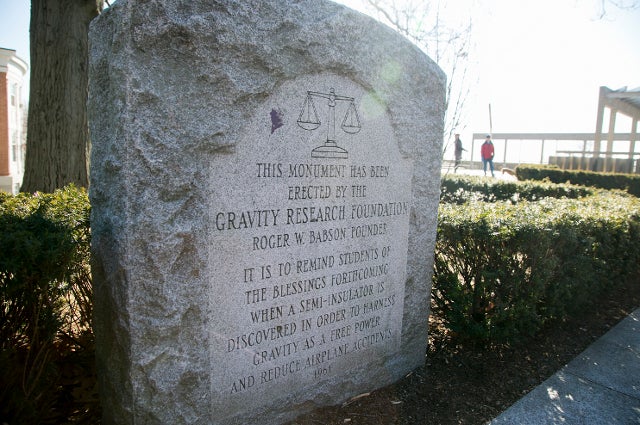 Scattered around Tufts’ three campuses are historical markers that often go unnoticed, hidden among the pathways that many of us travel regularly or in the buildings where we study and work. In this occasional series, “Mark the Spot,” Tufts Now explores the stories behind these snippets of university history.

A tragic accident led financial genius Roger Babson to become obsessed with the idea that one day the force of gravity could be overcome. Born in 1875 in Gloucester, Massachusetts, Babson despaired over the drowning death of his sister, Edith, in the Annisquam River. “She was unable to fight gravity,” he later wrote, “which came up and seized her like a dragon and brought her to the bottom.” Years later, his grandson Michael would also drown trying to save a friend during a boating mishap.

This second loss furthered Babson’s resolve, and in 1949 he founded the Gravity Research Foundation, “with the possible hope that someday the force of gravity may be controlled.”

Babson, for whom Babson College is named, earned his wealth as an investment analyst. He published a stocks and bonds newsletter and founded the financial analysis firm Babson's Statistical Organization, later called Babson’s Reports.

To further research about gravity, he donated money to more than a dozen colleges, including Tufts, and paid for markers to be installed on each campus. On the Medford/Somerville campus a granite antigravity stone was installed near the walkway between Eaton Hall and Goddard Chapel in 1961. The marker exists “to remind students of the blessings forthcoming when a semi-insulator is discovered in order to harness gravity as a free power and reduce airplane accidents.”

The solid granite monument weighs somewhere between 2,000 to 3,200 pounds. In 1962 a group of students, along with buildings and grounds workers, tested whether the stone itself could defy gravity by digging a large hole beneath it. Thus began a cycle of burying and then digging up the stone, a tradition that continued until the early 1980s.

Babson’s Gravity Research Foundation also sponsored an annual competition seeking proposals for antigravity devices. The contest was later modified to include essays on gravitation in general, including its effects and application. Among the winners was the English theoretical physicist Stephen Hawking, H89. 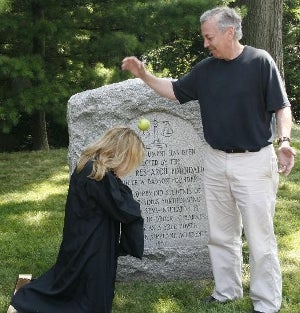 Along with her doctorate in physics in 2006, Delia Schwartz-Perlov received the requisite apple on the noggin from Professor Alexander Vilenkin in front of the Gravity Research Foundation stone.
Tufts used Babson’s donation to establish the Tufts Institute of Cosmology, a division of the Department of Physics and Astronomy. When students earn a Ph.D. in the department, members of the institute gather at the antigravity stone for a cosmic rite of passage: The student kneels in front of the stone, and his or her dissertation advisor drops an apple on the student’s head, commemorating Isaac Newton’s (at least theoretical) moment of insight into gravity.

Alexander Vilenkin, director of the institute and the L. and J. Bernstein Professor of Evolutionary Science, once noted, “The funny thing is that we do work on antigravity now, because in the new theories of cosmology, the key concept is . . . the very rapid accelerated expansion of the universe propelled by a repulsive gravitational force. So we do work on antigravity, as Babson wanted us to. We did not get to preventing airplane accidents, though.”