Hundreds herald the arrival of the 5,000-pound statue of Jumbo the elephant

The latest incarnation of Tufts’ beloved mascot, Jumbo, brought audible gasps of awe from the hundreds gathered to watch as it was unveiled in front of Barnum Hall on the Medford/Somerville campus on April 17.

The life-size bronze sculpture of the world’s most famous pachyderm—nearly 12 feet tall and 18 feet long and weighing in at 5,000 pounds—is impressive not just for its proportions, but for its energy. Trunk held high, Jumbo gazes serenely across the campus, as if he might at any moment saunter about and explore his new home.

“We have without question the best and coolest mascot in the country,” Andrew McClellan, professor of art and art history, told those gathered on the academic quad. “Now we have a statue worthy of our mascot’s physical stature and fame.” Last year, McClellan wrote a book and curated an exhibition at the University Art Gallery to mark the 125th anniversary of Jumbo’s arrival on campus.

The spot where Jumbo stands is but feet away from the lobby of the former Barnum Museum of Natural History, where the original stuffed Jumbo presided over campus from 1889, when the legendary showman P.T. Barnum donated him to Tufts, until April 14, 1975, when Barnum Hall and Tufts’ mascot were destroyed in a fire.

The massive sculpture, created by the California artist Steven Whyte, was commissioned through the generosity of Richard W. Reynolds, A67, who served as vice president of operations at Tufts from 2009 to 2012. “The idea that a new Jumbo would lead to enhanced enthusiasm for Tufts and thus over the years to more involvement and contributions to the university struck me,” Reynolds said at the unveiling.

He said an email from one of his former fraternity brothers reinforced his decision to donate a new Jumbo to Tufts. It said, “Bringing back Jumbo is a terrific thing because his restoration on the Hill will be a visible and symbolic force galvanizing campus life, and I think that’s special.” The new sculpture replaces a crumbling concrete statue of a 10-foot Indian elephant that came from a New Hampshire theme park. 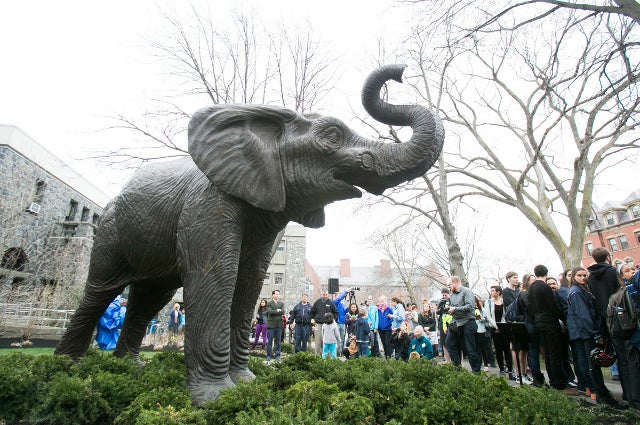 “The idea that a new Jumbo would lead to enhanced enthusiasm for Tufts and thus over the years to more involvement and contributions to the university struck me,” says Dick Reynolds, A67. Photo: Kelvin Ma

The statue stands in the new Jumbo’s Garden, made possible through the generosity of M. Richard (Dick) Asher, A53, and Sheila S. Asher. When fully grown, the grasses and shrubs will resemble the African Sahel, where the real Jumbo was born.

Speaking on behalf of the couple, who were unable to attend, Allan H. Seigal, A55, Sheila Asher’s brother, said, “It is their hope that this Jumbo will become as revered as the original, and that Jumbo’s presence on campus will serve as a unifying force for the student body and the entire Tufts community.”

Jumbo’s homecoming ended a 3,200-mile, six-day, cross-country drive on a low-rider trailer from Carmel, California. A crane plopped the bronze behemoth in Jumbo’s Garden on April 9, and he was shrouded in secrecy (as much as a huge tarp can conceal an enormous elephant) until the unveiling. But the story of Jumbo’s creation started two years ago.

“It was in April of 2013 that Tufts chose the sculptor,” Reynolds said. “And it just so happens—and I looked this up—that 24 months is the normal gestation period for an elephant. So we are not late; we are right on time,” he said, noting that the unveiling originally had been scheduled for last fall.

In addition to those who, as one student said, wanted to witness a moment in Tufts history, some students used the public event to protest custodial layoffs, gathering in front of the podium and circling the statue, holding a banner and saying nothing.

Whyte, the sculptor, said he started to make Jumbo after observing the elephants at the Oakland Zoo. He then created tabletop models of Jumbo, based on a well-known photograph taken at the London Zoo in 1882. To create the life-size sculpture, he used 350,000 pounds of clay, which was then covered in rubber and coated with plaster, on which he carved Jumbo’s features. The work was completed after 50 pieces of bronze were welded together to make the statue.

“Elephants have great memories, so thank you for allowing me to present you with a sculpture that will be part of the memories of all the Jumbos to come,” Whyte said.

A Thousand Coats of Paint: Restoring the Tufts Cannon

The Glory That Was Jumbo