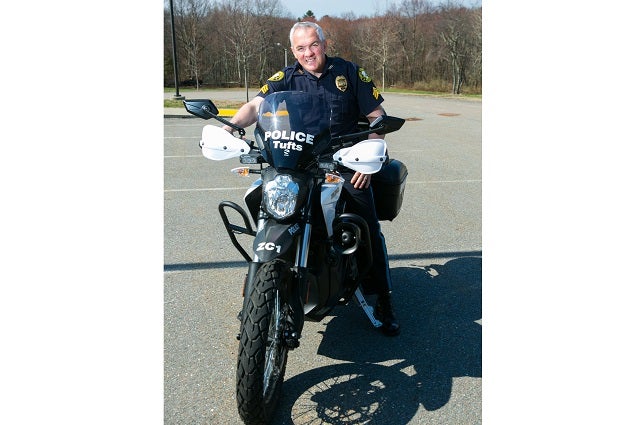 NORTH GRAFTON, Mass. (April 23, 2015)—The Tufts University Police Department has added an electric motorcycle to its fleet of vehicles, demonstrating that being green and business-savvy go hand-in-hand.

The electrically-powered two-wheeler, housed on the Cummings School of Veterinary Medicine campus in North Grafton, will save the department in fuel and maintenance costs, according to Sgt. Glenn McCune, who wrote a proposal to obtain the motorcycle.

“Each mile ridden on an electric motorcycle is considerably less expensive due to the elimination of routine engine maintenance and gas expenses,” he said. “When compared to standard gas-operated vehicles, we’ll start making back our investment on day one.”

Before the motorcycle acquisition, the Tufts Police operation in Grafton had two officers and one police cruiser. With the veterinary school’s unique layout of open fields and an expanse of wooded areas, another vehicle allows the officers to patrol more of the campus in less time, and better leverage its assigned staff.

The motorcycle can be plugged into any standard electrical outlet and the battery lasts approximately eight hours without recharging. It has a silent engine, and on- and off-road capabilities to access remote areas of the Grafton campus. In addition to minimizing noise pollution, the electric engine produces no exhaust. Tufts’ campuses in Boston and Medford/Somerville can also use the vehicle during special events that would benefit from a motorcycle patrol unit.

Sgt. McCune sought the green option because of the potential cost savings and a desire to meet the university’s sustainability goals. In 2012, Tufts President Anthony P. Monaco established a Sustainability Council which has identified ways to reduce campus waste, energy and water consumption, and greenhouse gas emissions.  Campus sustainability has been a decades-long priority; in 1990, Tufts developed the first university environmental policy and launched the international Talloires Declaration, now endorsed by 433 university leaders worldwide.

Kevin Maguire, director of the Tufts Department of Public and Environmental Safety, was enthusiastic about Sgt. McCune’s proposal and helped garner support for the initiative earlier this year.

“Tufts supports activities that promote green living and healthy lifestyles and there are many innovative examples to cite on all three campuses. We are proud that the electric motorcycle at Cummings School is one of them and we are grateful to Sgt. McCune for his leadership in making an environmentally-conscious choice,” Maguire said.

About Cummings School of Veterinary Medicine at Tufts University

Founded in 1978 in North Grafton, Mass., Cummings School of Veterinary Medicine at Tufts University is internationally esteemed for academic programs that impact society and the practice of veterinary medicine; three hospitals and four clinics that combined log more than 80,000 animal cases each year; and groundbreaking research that benefits animal, public, and environmental health.

As Glaciers Melt at an Alarming Pace, a Geologist Reflects on the Legacy of Ice Ages and What the Future May Hold