Obama and the Tufts Inventor

Harry Paul, A18, earns a shout-out from the president for his device to manage a health condition he knows well—congenital scoliosis 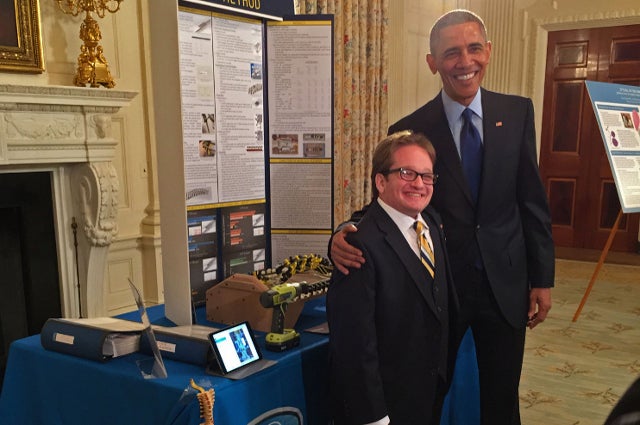 A couple of weeks ago, freshman Harry Paul skipped all his Monday classes, but he wasn’t slacking off. He was in Washington, D.C., talking to President Barack Obama about a medical device he invented that could help young scoliosis patients avoid repetitive surgeries to manage severe curvature of the spine.

At the 2015 White House Science Fair, Obama, trailed by a cluster of journalists, cameras clicking and boom mikes looming overhead, came up and shook Paul’s hand. The president listened intently as Paul described his invention, designed to be implanted into the spine and expand to correct spinal misalignment as a child grows.

Paul was born with congenital scoliosis. A more common form of the condition develops in adolescence, but it is not as serious as congenital scoliosis, in which the curving spine can force the ribcage to press against the lungs, heart and other vital organs, making it difficult to breathe and harder for the heart to pump blood. The condition occurs in 1 in 10,000 newborns, according to the American Academy of Orthopaedic Surgeons. If untreated, congenital scoliosis can lead to infections such as pneumonia, and ultimately, heart failure.

To keep young children’s spines from curving, surgeons insert metal alloy rods. As the kids grow, the rods need to be lengthened every three to six months, and so they face a childhood defined by surgery. Paul endured 16 operations by the time he was 11, when surgeons fused his spinal column to avoid other complications. That meant he would grow no taller than his height at the time, 4 feet 10 inches.

Paul began to wonder if there was a better way. “Doctors had gotten amazingly good at fixing the spine, keeping it straight and allowing growth to happen with repeated surgeries,” he says. “I’m not putting those down—they saved my life. But I was really interested in coming up with something new.”

What he came up with led him to Washington on March 23, when he was one of 100 students chosen from across the country to take part in this year’s White House Science Fair. It wasn’t just Obama who dropped by to learn about his device, which he’s dubbed the Growing Spine Implant and Test Method. He also spoke with Francis Collins, director of the National Institutes of Health; NASA administrator Charles Bolden; and other high-ranking officials—“serious players,” he says, smiling.

“The notion that you can take your own experiences and apply it—what a powerful story it is,” Obama told Paul.

“It was quite a thrill,” relates Paul about his moment in the national spotlight, which also included a public shout-out from Obama when the president made brief remarks at the science fair. 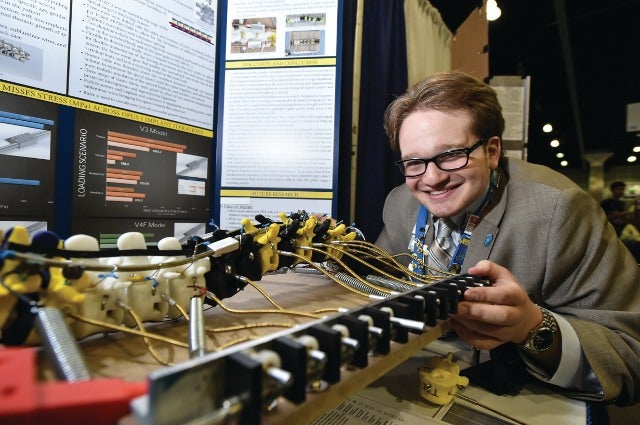 Harry Paul, A18, with the device he calls the Growing Spine Implant and Test Method. Photo: Chris Ayers Photography/SSP

From Crazy Contraptions to Implants

Paul’s road to the White House began when he was a freshman in high school. He had a simple thought: What if there was an implant that could expand as a child grew, negating the need to keep implanting new rods?

He Googled “scoliosis,” and the first article he saw was one by his doctor. He read everything he could find on scoliosis: academic articles, engineering books, surgery handbooks, case studies. He ordered a plastic model of a spine, took it apart, drilled into it and rigged something he thought might work. In retrospect, he says he’s embarrassed by his first efforts, but he had to start somewhere.

“I had never done any engineering,” says Paul, who plans to major in biochemistry and community health. “I wasn’t someone who played with Legos.”

He made another model, and then another. He kept coming up with new ideas—a coil that could expand as the spine grows, and then a spring-based system. He learned how to use a computer design program to build 3-D models of a spinal column, with assistance from a biomedical engineering firm in Virginia, K2M, which develops technologies to treat patients with complex spinal problems. He says he went “from making crazy contraptions to making implants.”

Paul spent months refining his device, made of a titanium alloy. He tested his prototype virtually, using mathematical models. “All the math proved it would work, and I knew it worked, because I believed in it,” he says.

He has applied for a patent for his device, though it will be years before children with congenital scoliosis could benefit. It would have to make its way through the FDA’s rigorous clinical trial process, first in animals, and then in humans. But Paul is optimistic. At the very least, he says, his project might inspire others to pursue their own treatments for congenital scoliosis.