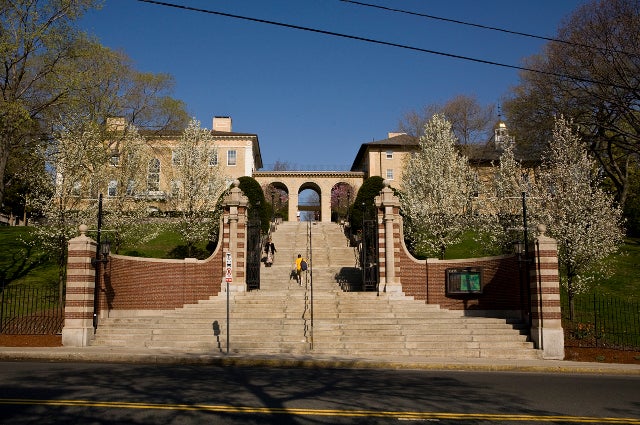 Work will begin after commencement in May to rebuild the Memorial Steps, a landmark on the Medford/Somerville campus that commemorates Tufts alumni who served in the armed forces from the Civil War to Vietnam. The stairs are the gateway to the upper campus. Built in the 1920s, the steps have fallen into disrepair as a result of the harsh New England winters, poor drainage and crumbling foundations.

The restoration will extend from the curb at College Avenue to the main campus road in front of Paige and Miner halls, according to Raymond N. Santangelo, senior manager of project administration. A new landscaped seating area will be installed at the top of the stairs, in front of the Paige-Miner portico.

Because the work will last until December, plans are underway to ensure that students, faculty, staff and visitors have access to the portion of campus served by the stairs; directional signs will point the way. Initially, the two paths alongside the stairs will be blocked to make space to store equipment and construction materials. By the start of the fall semester, one pathway will reopen while the work continues.

The Memorial Steps were part of a master plan created for Tufts by the firm founded by renowned American landscape architect Frederick Law Olmstead, whose son and stepson took over the company after Olmstead’s death in 1903. The plan was commissioned by Tufts President John Albert Cousens.

The steps, which opened the campus to College Avenue and the School of Engineering, have needed constant repairs over the years, says Santangelo. The most recent work was done in 2000, but since then, the granite steps and concrete have cracked and broken apart in some sections. Santangelo says the treads were not properly supported. Water has seeped underneath them and washed out the soil, causing some of the steps to drop. The new stairs will have secure concrete supports as well as a snow-melt system to make them safe in the winter.

The bronze plaques inset on the landings to commemorate Tufts’ war dead in six conflicts have become “trip hazards” as the steps have deteriorated. They will be replaced with granite, which will be inscribed with tributes to the same group of veterans who are recognized on the existing bronze markers. A new marker will be installed for Tufts alumni who served in Iraq and Afghanistan.