Why Some of Us Are Fat, and Others Aren’t

Researchers at Tufts are taking on obesity from many different angles

The obesity epidemic is not an American phenomenon. About 37 percent of the world’s adults are overweight or obese, and no nation has been able to claim even a tiny reversal in the trend in the last 33 years.

Making a dent in obesity rates is going to take a “global, multidisciplinary, multipronged approach,” said Friedman School Professor Simin Meydani, director of the Jean Mayer USDA Human Nutrition Research Center on Aging at Tufts (HNRCA). She spoke at the Tufts Talks Obesity symposium on April 28, a forum that highlighted some of the dozens of researchers at the Friedman School and the HNRCA who are tackling the epidemic from all angles, from cellular discovery to societal change. 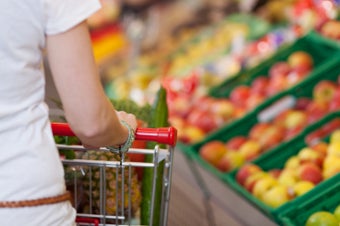 “We really need to empower children to go into the supermarket and make the best choices,” said Alice Lichtenstein. Photo: Depositphotos
Gershoff Professor Alice Lichtenstein, who recently finished work as vice chair of the 2015 Dietary Guidelines Advisory Committee, acknowledged that the food environment we live in is overflowing with sugary, calorie-rich foods and enormous portion sizes, but she pooh-poohed the notion that we can’t do anything about it. In recent years, she said, she has seen many more convenience stores offering healthy options like fresh fruit, and airport vendors promoting selections of 500 calories or less.

“I expect they are responding to demand; they are not doing it as a public service,” she said. “The more people buy the fresh fruit and not the brownie, the more fresh fruit we are going to see.”

A lot will depend on how well we educate the next generation on how to hunt and gather in the 21st century, she said. “We really need to empower children to go into the supermarket and make the best choices.”

That’s one aim of ChildObesity180, a partnership of public health, higher education and business leaders directed by Christina Economos, N96, the New Balance Chair in Childhood Nutrition at the Friedman School. Her work on the Shape Up Somerville project was nationally recognized—by Michelle Obama’s “Let’s Move” campaign, among others—for showing that community-based efforts could reduce weight gain in children.

“Our goal is to bring the same obesity prevention solutions that grew right out of Somerville to children across the country to create impact on a massive scale,” she said.

ChildObesity180's programs have helped communities put physical activity back into the school day, replace sugar-sweetened beverages with water on the sports field and boost kids’ intake of fruits and vegetables. So far, the programs have reached 1.2 million children in all 50 states.

Changing the Way We Think About Food

While ChildObesity180 is focusing on the young, Professor Susan Roberts, director of the Energy Metabolism Laboratory at the HNRCA, is working to help adults sort out the barrage of conflicting advice on the best way to lose weight. Dropping pounds is not the same as preventing weight gain, she said, because losing weight puts people up against hunger, a basic human survival mechanism that resides in the unconscious brain.

“We can’t just tell people to have calorie-controlled portions of healthy food and expect that to be easy,” she said, pointing out that hunger originates in the same region of the brain that controls breathing. “Willpower is not going to be very good in addressing those things. We have to work with our neurobiology.”

Her lab has developed a diet plan that controls hunger and reduces cravings and, as brain scans have shown, actually gets people more excited by, say, a grilled chicken breast than a fried drumstick.

To expand the reach of the plan, Roberts has formed collaborations in China, Brazil, Finland, Kuwait, Ghana and India, where she is exploring cultural barriers to weight control.

Other researchers are looking to mitigate the devastating health effects of obesity, which include an increased risk of diabetes and several common cancers. “The effect is a very potent one,” said Professor Joel Mason, director of the Vitamins and Carcinogenesis Laboratory at the HNRCA, pointing out that merely being overweight sizably increases cancer risk.

“Unfortunately, we’re not going to be able to tackle this problem of obesity in the next five or perhaps even 10 years,” he said. “A lot of us are trying to tease out the biochemical and molecular mechanisms by which obesity promotes cancer, thereby providing us certain targets that we can block.”

Andrew Greenberg, the Atkins Professor at the School of Medicine and an associate professor at the Friedman School, has conducted groundbreaking research on fat cells and their relationship to high blood sugar and diabetes. Among other things, his lab, the HNRCA’s Obesity and Metabolism Laboratory, is looking at how some bacteria in the intestine can be protective against diabetes.

Steer Away from Starches

In addition to discovery in the lab, we might be well served by questioning what we think we already know about obesity. Dariush Mozaffarian, dean of the Friedman School, said that the root cause of obesity is not to be found in the old saw of “calories in versus calories out.”

“Saying that obesity is a problem of energy balance is like saying fever is caused by temperature imbalance,” he said.

Any diet can make you lose pounds by cutting calories in the short term, he said, but in the long term—up to 20 years—his research has shown that certain foods are linked to weight gain or loss.

At the top of the weight-gain list were potatoes, he said. “And it didn’t matter whether they were boiled or baked or mashed or French fries or had fat in them or didn’t have fat in them. It was the starch.”

The weight gain associated with sweets and desserts was identical to that from refined grains, making white bread as big a culprit as sugar. Fruits, vegetables, nuts and yogurt were associated with weight loss, while eating more cheese or milk (low-fat or whole) made little difference.

“I would actually say that we can eat as much as we want of some things, and we won’t gain weight because of long-term influences,” such as satiety and reward, he said.

The Obesity and Cancer Metastasis Connection