After a dozen years as dean, Linda Abriola has raised the profile of the School of Engineering, and fostered a culture of inclusion for women engineers 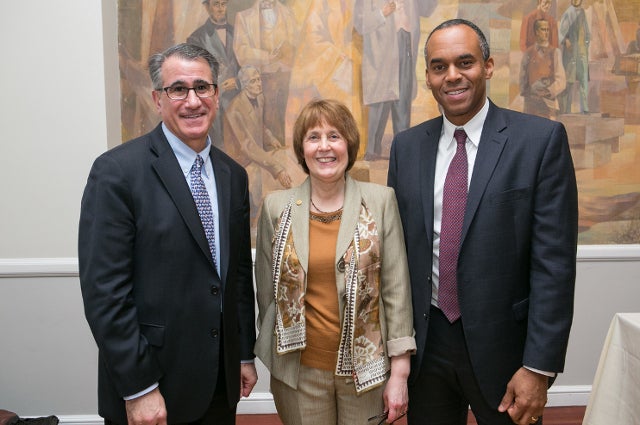 Another first came 12 years ago, when she was appointed the first woman dean of engineering at Tufts University.

“Throughout my career, I’ve been one of very few. I’ve been committed ever since to increasing the representation of women in engineering,” says Abriola, who was named a University Professor in April and will return to the engineering faculty to teach and conduct research in subsurface transport as principal investigator for Tufts’ Integrated Multiphase Environmental Systems Laboratory.

Abriola’s stories about her early career stand in stark contrast to the current landscape at Tufts, where women comprise 24 percent of the engineering faculty and 30 percent of the undergraduate student body—both well above the national averages of 14 and 20 percent, respectively.

The numbers are emblematic of the inclusive environment Abriola has fostered at the school since she became dean in 2003. Among her proudest accomplishments, she says, is the establishment of BEST (Bridge to Engineering Success at Tufts), a six-week summer bridge program designed to ease the transition from high school for first-generation college students interested in pursuing degrees in engineering and computer science. The second class of BEST scholars will graduate on May 17.

“BEST has been instrumental in helping us recruit students from underrepresented groups and underserved schools,” Abriola says. “I think we’re really making a difference in terms of the ability of a whole group of students to succeed here at Tufts and flourish as engineers. Our goal is not just to recruit and retain them. We want them to become leaders.”

During her tenure, the School of Engineering has achieved a negative attrition rate—that is, more students transfer into the school than leave. Abriola credits the growing popularity of the engineering disciplines at Tufts in part to the “broader perspective on what it means to be an engineer. We’re encouraging students to pursue other interests and bring other fields in, like biology and the social sciences,” she says.

Members of the faculty have been urged to do the same, says Abriola, who has increased the faculty from 54 to 80. In addition, she has recruited 16 professors of the practice, individuals who have had distinguished careers in industry and bring that real-world experience to the classroom. Engaged in research in areas such as construction and performance of offshore wind turbines, medical product design and the development of novel polymer material, professors of the practice sometimes collaborate with tenured and tenure-track faculty to solve real-world problems, too, says Abriola.

A Core of Collaboration

Abriola says the Tufts faculty members hired during her tenure as dean are “pushing the boundaries of engineering and engaged in exciting new research areas,” from melt-away electronic sensors and soft solar cells to water diplomacy and moral robots.

“The only way we can make our mark as a school, since we’re still going to be small even if we substantially increase our faculty size, is by working across disciplinary boundaries,” she says. “When I came here, I found a tremendously collegial place with a real sense of community and attention to students. I’ve tried very hard to preserve that while increasing the research and graduate education profiles.”

Again, the numbers tell the story. Nearly 75 percent of the faculty receive external grant funding, compared with 40 percent in 2003. And graduate engineering education will be buoyed with a $1 million-plus graduate fellowship, which the school’s board of advisors established in April to recognize the dean’s leadership.

Abriola also has placed a premium on recruiting faculty who are as passionate about teaching as they are about their own research.

“I look for folks who don’t separate education and research—who believe these are connected—and for people who are also passionate about what they are doing,” Abriola says. “I like to see their eyes light up when they talk about their work.”

She remains a dedicated researcher. An expert in groundwater contamination and remediation, she developed a mathematical model that describes the way a group of chemicals used as degreasers and in dry cleaning—all known carcinogens and harmful to the environment—spreads through soil and groundwater. Her work could lead to more cost-effective ways to clean up contaminated sites. “I’m still hopeful we’ll be able to go in there one day and restore the environment,” she says. “That’s why I got into this in the beginning.”

Mentors from the Beginning

And she remains deeply grateful to the mentors who have guided her, beginning with her father, Joseph Abriola, a Drexel University-trained engineer—like his daughter—who saw no reason why she couldn’t become an engineer. “He always encouraged me ever since I was small to be interested in science,” she says.

Later, her sixth-grade teacher, Edward Massa, whom she describes as a Renaissance man, also took on that role. Abriola, who says she’s a “sentimental person,” sent him Christmas cards for decades.

“In college, I had some faculty who weren’t used to having women in their classroom, but once they understood I was serious, they were enormously supportive. I’ve had some very strong male mentors along the way,” she says, mentioning two of her professors at Drexel, Edward Doheny and Leon Behar.

At Princeton, where she earned her Ph.D. in civil engineering, one of her mentors was George F. Pinder, who consulted on the lawsuit brought against W.R. Grace and Beatrice Foods for contaminating the water supply in Woburn, Massachusetts; the case was documented in the book and film A Civil Action.

Still, Abriola says she felt the lack of professional female role models. She believes one reason women may avoid engineering is the perception that the field is full of isolated scientists. She disagrees. “Engineering is a very creative profession, and it’s also a very collaborative, people-oriented profession. I’ve been able to find ways to feel very fulfilled in my profession, and I wish that for many women.”

Before she first set foot on campus, Abriola wasn’t sure she wanted to leave teaching for academic administration. (Prior to coming to Tufts, she had been the Horace Williams King Collegiate Professor of Environmental Engineering at the University of Michigan.) She has no regrets.

“I don’t think there are many opportunities in life where you have such a great foundation on which to build and you can create something,” she says. “My colleagues all said, ‘You’re going to the dark side.’ ” She smiles. “Well, it doesn’t have to be dark. It can be extremely rewarding.”

A reception honoring Linda Abriola’s service as dean of the School of Engineering will be held on Tuesday, May 5, from 3 to 5 p.m. in the Coolidge Room of Ballou Hall on the Medford/Somerville campus.