Science to the People 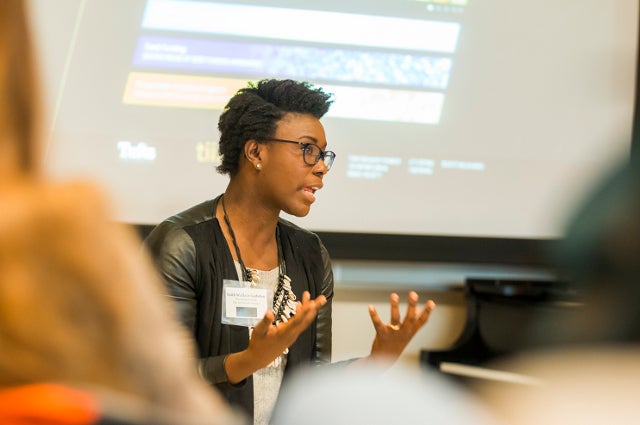 When Doug Brugge learned a few years ago that the city of Boston had plans to build a new high school adjacent to a highway exit ramp in Chinatown, he had concerns.

Brugge, a professor in the Department of Public Health and Community Medicine at Tufts School of Medicine, and his colleagues had been among the first to show an association between ultrafine particles found in highway pollution and blood markers of inflammation in the systems of people who live nearby, and he knew the high school students might be at risk.

The city redesigned the proposed school building’s ventilation system based on the researchers’ concerns, and even though plans for that high school have since been scrapped, Brugge considers the intervention a success.

“The point here is not just the science, but how we translate it into policy and practice,” Brugge said at the Tufts Institute for Innovation’s first student symposium last month.

Entitled “Research, Innovation and Community Engagement,” the symposium gave undergraduate and graduate students the opportunity to hear from Tufts researchers who are already engaging with the communities they serve. It also gave students the chance to consider ways they can follow in the researchers’ footsteps.

As part of their ongoing community-based research, for example, Brugge’s group takes care to write reports that are accessible not just to career scientists, but also to politicians, developers and the public. His team offers those same groups an array of options that can mitigate the health effects of pollution.

“Research is more than just about generating new knowledge. It’s also about collaboration,” said TII’s founding director and Robinson Professor of Chemistry David R. Walt, in his opening remarks. “Good research only happens by working with others and by sharing knowledge and by learning from one another, instead of just learning from someone who’s standing in the front of the room.”

Moving Beyond the Lab

Taking a philosophical view of the words “research,” “innovation,” “community” and “engagement,” Peter Levine, Lincoln Filene Professor of Citizenship and Public Affairs at Tisch College, noted that as traditional means of civic engagement—such as journalism—decline, collaborating on research is one of the few ways universities have left to engage with their communities.

But universities must take care to avoid the assumption that innovation is always desirable.  While “innovation is the coin of the realm in academia,” he said, the communities that scientists seek to help may place more value on stability, predictability or tradition.  “Innovation and research fit comfortably together, [but] innovation and community are a much less comfortable pair,” he said. “But engagement—that itself can be done in innovative ways.”

That’s true in many settings, near and far. When cholera broke out in Haiti in the aftermath of the 7.0 magnitude earthquake that struck the region in 2010, Faith Wallace-Gadsden—then a Sackler School Ph.D. candidate studying microbiology in Andrew Camilli’s lab—wasted no time getting to the devastated island nation.

Wallace-Gadsden, who graduated in 2014, knew treating water with simple, inexpensive chlorine could stop the infection in its tracks. She couldn’t understand why aid workers, armed with staff, huge budgets and good intentions, couldn’t seem to get ahead of the outbreak.

For Wallace-Gadsden, community engagement meant working closely with women in Haiti to figure out not just how to distribute chlorine to local families, but how to do so sustainably, long after aid workers have moved on to the next disaster. The result was Kouzin Dlo/Community Chlorinators, the local small business that Wallace-Gadsden co-founded with Jessica LaPorte, A09.

The innovation behind Kouzin Dlo wasn’t scientific. The real innovation was engaging with the people living with the problem that researchers like Wallace-Gadsden hoped to solve.

“If universities are going to stay relevant, they are going to have to show this kind of community benefit,” said David Gute, a professor of civil and environmental engineering. He helped start Vida Verde, a co-op of Brazilian housecleaners who use non-toxic products. “That thing flourished in the teeth of a downturned economy,” he said. “And it reduced the use of toxic materials. It was a public health intervention that worked even after the grant money went away.”

Keeping these public health goals in mind is crucial, said Karen Kosinski, who is working to prevent schistosomiasis in the African nation of Ghana. Schistosomiasis is a waterborne disease that has infected more than 200 million people worldwide, and does long-term damage to the uro-genital tract and the digestive and nervous systems. Access to clean, fresh water eliminates the disease, but providing that access is easier said than done in most parts of rural Africa.

“In the lab you can manipulate all kinds of variables. In a community setting, you do not manipulate variables that involve small schoolchildren,” said Kosinski, an assistant professor of public health and community medicine in the School of Medicine. “You’re always held to the highest possible ethical standard, and you want to do what’s in the best interest of the community. Sometimes that flies in the face of what would be the best in terms of answering a scientific question.”

“Most of us have gaps in our training and knowledge, and that requires other people to help us,” said Beamer, who is working on a technology-driven diagnostic tool for tuberculosis. “We need nanoscientists, chemists, molecular biologists. The challenge is we all speak different languages. We need to get over those hurdles.”

“Science has changed a lot. My 84-year-old dad is a parasitologist who still publishes three papers a year,” he said. “Eighty percent of his papers have a single author.”

A mathematician and epidemiologist who models infectious disease all over the world, Elena Naumova, associate dean for research at the Friedman School of Nutrition Science and Policy, emphasized the importance of building multigenerational research teams. Her own projects, which have spanned the globe from Boston to India, have included students at every level from undergraduates to postdocs.

Dropping what panel moderator Jonathan Garlick, professor of oral pathology at the School of Dental Medicine, called “Jedi wisdom” on the crowd, Naumova gave advice about building a collaborative research team that seemed applicable well beyond academia. Her “keys to collaboration” include respect, trust and guidance. And a good attitude doesn’t hurt either, she said.