The Art of Game Design

For Aromie Kim, overseeing the look and feel of the new video game “Midnight Terrors” was a dream come true 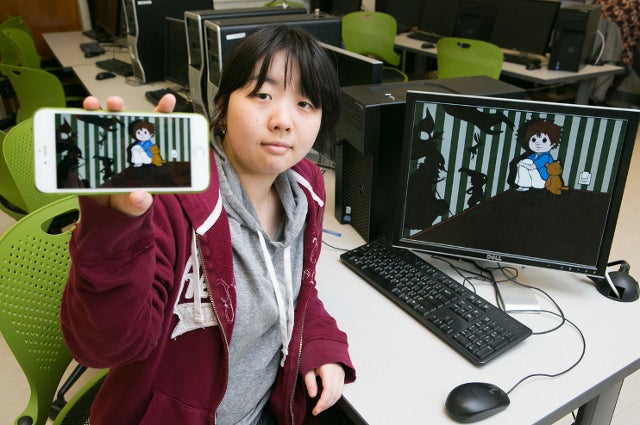 Aromie Kim, A16, almost missed the chance to make a dream come true.

The 21-year-old cognitive and brain sciences major has had a lifelong romance with video games, starting with Mario and Pokémon, which she played with her sister. As Kim’s taste in games matured, so did her goals. “I had my own vision and worlds in my head. I realized that I didn’t want to just play games, I wanted to [design them],” she says.

So when she learned about a summer program that offers students the chance to develop an original video game, it was “one of my biggest dreams come true,” she says.

But Kim, a self-taught artist, almost didn’t apply to the 11-week summer innovation program sponsored by the Massachusetts Digital Games Institute (MassDiGI), based at Becker College in Worcester. She assumed her art skills would pale in comparison with those of other applicants who surely had more years of formal training.

She had learned about the program in her Introduction to Game Development class at Tufts. Her professor, Ming Chow, E02, E04, brought in his friend Timothy Loew, A91, now MassDiGI’s executive director, to talk about the program. 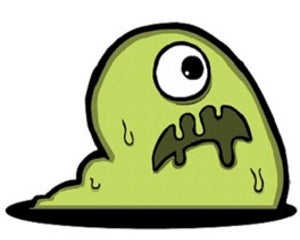 A “gool” from the game “Midnight Terrors.” Courtesy of Aromie Kim
Chow had no reservations about Kim’s ability to do well in the program. “She is a fantastic artist, one of the best I’ve ever seen,” he says. “I told her, ‘Don’t disqualify yourself. The worst thing to do is not even attempt to apply.’ ”

It paid off. Kim and her six teammates—students from Becker College, Berklee College of Music, MIT, Mount Holyoke College and Northeastern University—created Midnight Terrors, a game in which the player defends a little boy named Casey from things that go bump in the night. A classic tower defense type of game, it invites players to fight off ghosts and monsters using the toys scattered around the boy’s house as weapons. As the monsters retreat from the plastic soldiers and wind-up robots, so do Casey’s anxieties. Midnight Terrors will soon be available in the Apple and Android app stores.

As the art director for Midnight Terrors, Kim came up with the overall look and feel of the game. It’s dark and a little creepy, but Casey is cute, with big, dark eyes, like a Japanese anime character.

“I really like the way he looks,” says Kim. “I am really happy with the art’s style. I didn’t want to make it so defined. I like a sketchy, scratchy style to add to the creepiness.”

The game is loaded with lighthearted twists. One character Kim created is a tortoiseshell cat—not the common kind of striped cat, but a hybrid feline with a hard shell on its back.

Game design, she says, is about being playful, “and how you can translate your playfulness into something other people will maybe enjoy.”

One of the toughest parts of developing the game, Kim reports, was designing the user interface. Pressing virtual buttons has become so ingrained in many of our daily activities that it’s easy to forget it’s not always immediately obvious how to use a new app.

“It sounds so simple, but some people just didn’t know what to do unless we verbally told them when we were testing it,” she says. “It’s very humbling. If people don’t get it, they don’t get it. We try to fix it accordingly.”

That’s why many people in the technology and game development industries have some background in cognitive science, and Kim fits the bill. “I found the major by accident,” she says. “I’m really interested in how people think and how people communicate, whether it’s with other people or with technology.” 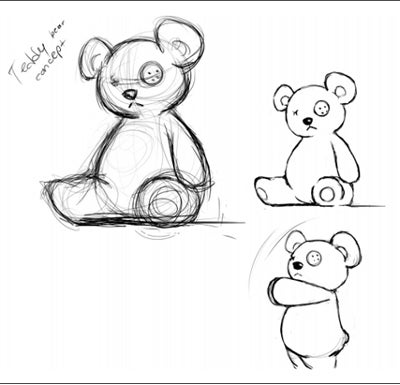 Concept art for a teddy bear weapon from “Midnight Terrors.” Courtesy of Aromie Kim
In addition to art directing the game, Kim was also the team’s producer. Wearing that hat, she made sure everyone was on task, on schedule and in general agreement. Some aspects of the role came naturally to her; she liked keeping tabs on everyone because it alleviated her anxiety about the work getting done. But she shied away from telling people what to do. Instead, she found her own management style.

“I hate forcing anything on anyone, so I tried to make people talk to each other,” Kim says. “I made sure people weren’t slacking, but I also made sure they weren’t getting too stressed out. It was really just making sure everyone was okay.”

The role encompassed many of the skills Chow says game development offers students like Kim. “They learn an endless list of things—many things that many students generally do not get out of the undergraduate experience, including how to work in a team, how to ship and finish a product and public speaking,” he says.

But perhaps the biggest lesson Kim took away was Chow’s initial advice to seize the moment. As she tells others now, “If you have an inkling of interest, you should go for it. Even if you don’t feel like you have enough skills, it never hurts to at least apply. Don’t let preconceptions stop you.”

And Kim isn’t just talking about her own anxiety about her artistic talent. She says she also was told more than once that the gaming culture—from designing and playing games to writing about them—is a guy’s world.

“There’s a lot of bias about girls doing this. I heard it from mentors and friends. It was kind of disheartening,” says Kim, whose team finished developing Midnight Terrors just as the GamerGate controversy regarding misogyny and harassment among gamers was gaining steam online. She remains positive. “I’m going to keep doing what I’m doing,” she says. “I’m pretty sure I’m going to keep doing game stuff.”