More Than Just a Tree 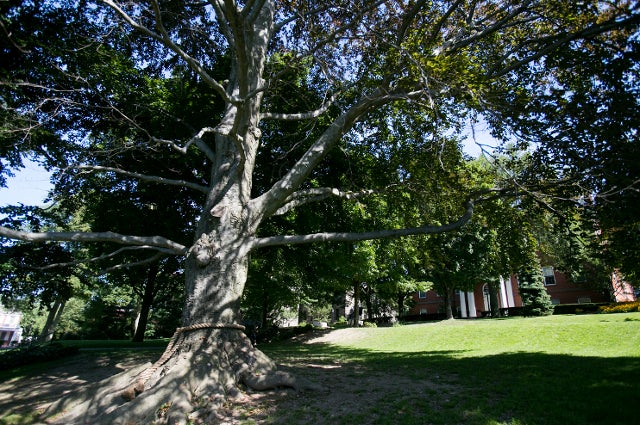 The landmark copper beech tree behind Ballou Hall that has given birth to lore and legend for more than 150 years on the Tufts campus has finally met its end.

After surviving the hurricanes and blizzards of New England’s capricious weather, the tree sustained a lethal blow from a random lightning bolt about a year ago.

“I knew it had to be a lightning strike when one side of the tree started dying before the other over the past year,” says John Vik, a certified arborist and staff grounds supervisor. A consulting arborist confirmed the diagnosis in January, when the progressive death of limbs on the tree’s south side was visible and most of the bark missing. Now, sadly, the entire tree has died and must come down, Vik says.

Tufts is losing not just the tree’s long, leafy branches that shade a wide swath of the sloping lawn behind Ballou Hall, but a place where those who sat on its exposed elephantine roots in dappled light said they found solace and inspiration.

The tree’s bark bore carvings by generations of Tufts students who wanted to make declarations of love or simply note they had been there.

“They wanted to make a connection to something lasting,” Vik says. “My daughter’s name [Carolyn Vik, E07] is up there.”

There will be a special ceremony on Wednesday, June 10 at 3:30 p.m. at the tree to commemorate it and what it has meant to the Tufts community. After the tree is taken down later in June, the wood from the trunk will be milled into lumber, and Tufts will use it to build a memorial bench or table.

After the Civil War 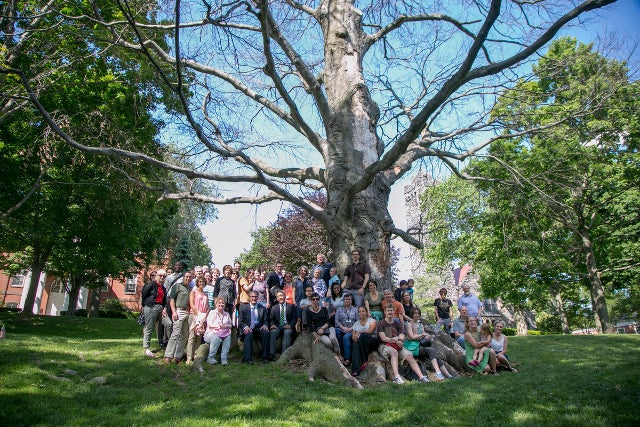 Participants pose after a special commemoration ceremony on June 10 dedicated to the copper beech tree on the President’s Lawn. Photo: Kelvin Ma
Records in University Archives indicate that the copper beech was likely among the first trees planted on the Medford/Somerville campus, sometime between 1855 and 1860, although there are no direct references to the specific tree.

When Ballou Hall was built in 1854, on what was then called Walnut Hill, the land had been stripped of vegetation, first during the American Revolution, when Hessian soldiers stationed in the area used its trees for firewood, and then later by area residents, perhaps for the flourishing shipbuilding industry, according to Tufts historians. 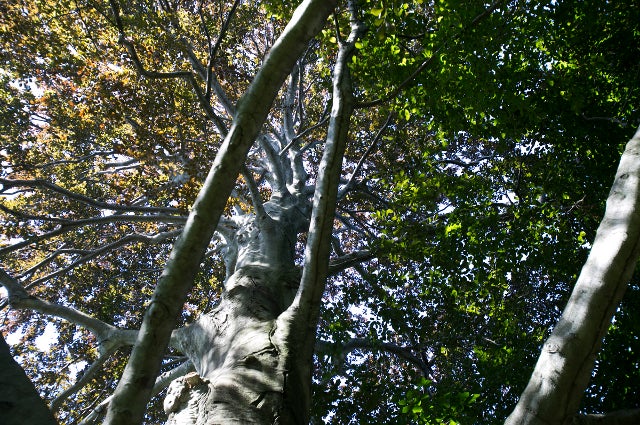 The canopy of the copper beech tree at Tufts in 2013. Photo: Kelvin Ma
For several years after Tufts’ founding in 1852, faculty, students and Medford townsfolk worked to beautify the barren hilltop by planting trees of all kinds. In the spring of 1858, the campus boasted 300 such plantings, Tufts historian Russell Miller wrote in his book Light on the Hill: A History of Tufts College, 1852-1952.

And in an 1856 letter from Hosea Ballou’s daughter Hattie, quoted in a May 1941 article in the Tuftonian, she describes to a friend the ongoing tree-planting process, whereby the college invited and encouraged students and faculty to personally plant trees. This could mean that the copper beech was personally planted, if not personally selected, by one of Tufts’ very first students or faculty. “This tree watched Tufts grow up around her,” Vik says.

Over the years, the mythos of the copper beech continued to grow. Students called it by many names: Methuselah (the oldest person ever to live, according to the Hebrew Bible); Gandalf (the wizard from J.R.R.Tolkien’s The Hobbit and The Lord of the Rings) and the Grandmother Tree, to name a few.

Two years ago, Charles Shirō Inouye, a professor of Japanese literature in the School of Arts and Sciences, and Joe Wat, A13, organized Tufts’ first shimenawa event—a ceremonial celebration of the tree. At the heart of the ceremony was the shimenawa, a wide brown rope adorned with dangling papers called shide and string tassels that “mark the tree as sacred in the sense of deserving veneration,” says Wat.

“The particular names that the tree may be given are irrelevant—what matters is that we all felt that it deserved a name. Something about this tree inspired people to name it,” Wat says. “The tree has impacted so many people.”

Inouye helped plan the ceremony to mark the tree’s passing. “We are saddened by the loss of the tree,” he says. “We tied our first shimenawa around it in April 2013. We wanted to honor it and to encourage everyone to gather around it, regardless of our diverse backgrounds.”

If diversity is our reality, he asks, how do we come together as a society? “That tree was our answer,” Inouye says. “It was something we all loved. It was not a symbol of anything. Neither was the rope we tied around it, which simply expressed our respect for it. It just showed us by example what we should do: to live, as best we could, with whatever came our way.”

Now the tree is teaching us about the cycles of life, Vik says, remembering the wisdom from the book of Ecclesiastes: for all things—life and death, sowing and reaping—there is a season.

Inouye agrees. “All things change. All living things must die. The tree that started living more than 150 years ago has now reached its end,” he says. “It’s sad. But without death, none of us would appreciate life.”