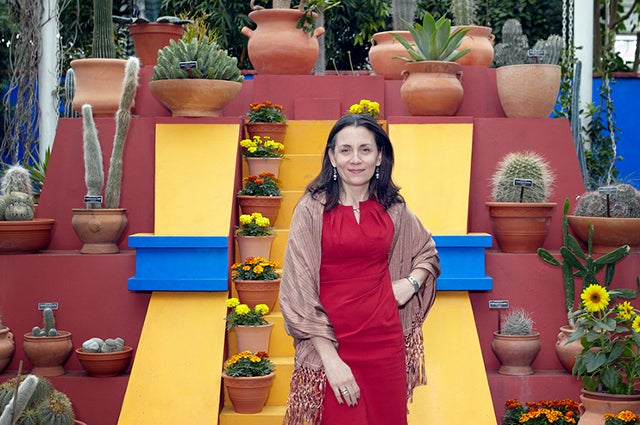 On a warm Saturday afternoon in mid-May, Adriana Zavala took in the scene at the New York Botanical Garden, indoors and out: a profusion of creamy calla lilies, prickly cacti and red bougainvillea, a trio of young Mexicans playing violins and guitar and people strolling and enjoying the art of Frida Kahlo, with several women channeling the artist herself, their hair piled high, flowers tucked behind their ears.

Zavala, an associate professor of art history in the School of Arts and Sciences, appreciates the compelling story of Frida Kahlo—the tumultuous marriage, the tragic accident, even her famous unibrow.

She understands why people are drawn to Kahlo’s persona, but hopes that through an exhibition she has curated at the Botanical Garden they come to understand the Mexican artist in other ways. Kahlo, she says, was a skilled observer with deeply felt political views. She also had an immense knowledge of the natural world and often incorporated flowers and plants in her paintings and drawings. 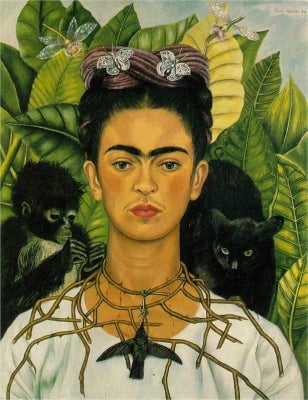 Frida Kahlo, Self-Portrait with Thorn Necklace and Hummingbird, 1940
The exhibition, Frida Kahlo: Art, Garden, Life, runs through Nov. 1. In addition to the 14 works of art, it includes an imaginative re-creation of Kahlo’s courtyard garden at her home in Mexico City, as well as Mexican music and food.

“I undertook this project because I wanted to challenge the biographical sensationalism that gravitates around Kahlo,” says Zavala. “I want people to understand her in a more profound way.”

Kahlo, who was born in 1907, was in poor health most of her life. She had polio as a child, and a traffic accident when she was 18 left her with a fractured spine and numerous other injuries, which plagued her for the rest of her life. She and muralist Diego Rivera had a volatile marriage, each having multiple affairs and ultimately divorcing, only to remarry each other. 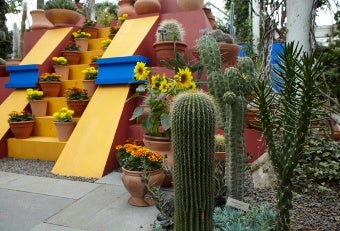 The man/plant portrait, Zavala says, represents Kahlo’s focus on hybridization, highlighting the split nature fundamental in her own life—her father was German, her mother Mexican. Composed in 1931, these works demonstrate Kahlo’s response to the thinking of the time, when the blending of races was viewed as degenerative.

Zavala has long studied Kahlo’s work, but discovered even more about the artist while curating the exhibition. The drawing The Dream, for example, contains a sketch in the margin of a cotyledon, an embryonic leaf in a seed, something Zavala hadn’t realized until it was pointed out by researchers at the Botanical Garden. She had looked at the classic painting Sun and Life many times, too, but until she saw it in person, she didn’t understand that it was both a portrait of Diego Rivera and a self-portrait. 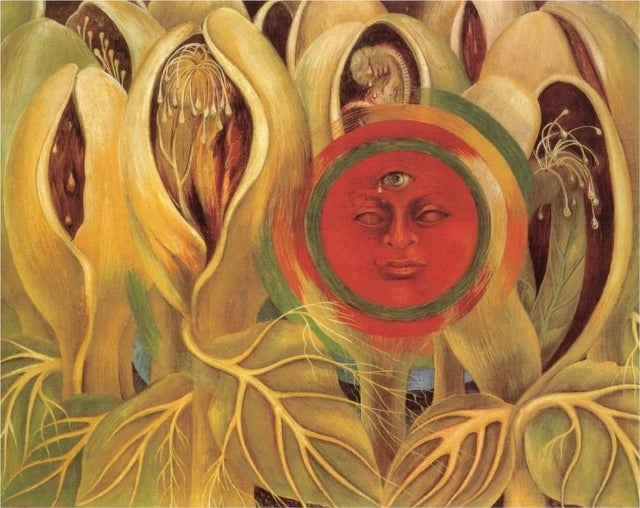 Frida Kahlo, Sun and Life, 1947
“Even art historians don’t always see the works in person that we write about,” says Zavala. “I had never seen Sun and Life, and it’s extraordinary. It looks like it was painted yesterday: the colors are brilliant, and the surface qualities are clear. When you see a reproduction, you don’t pick up on that.”

The paintings and drawings in the exhibition highlight both Kahlo’s imagination and her knowledge of science. “Clearly she understood science quite well,” says Zavala. “We looked at books in her library and house, and she had many on science and medicine and on medicinal plants.”

Zavala thinks that while many people will always be drawn to the mystique of Kahlo, her art will endure on its own. “If you Google Frida Kahlo, the first images that come up are not her works of art, but rather photographs of Kahlo,” she says. “I do what I can to make people understand that’s not ideal, that we should be approaching her through her art. This is my effort to do that, to bring people in. Whatever draws them in is fine, and then we can teach them something.”