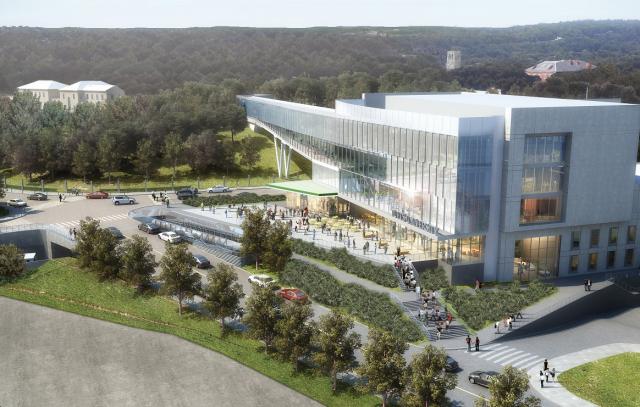 MEDFORD/SOMERVILLE, Mass. (June 15, 2015) –  Tufts University today announced plans for a new academic building  to be constructed at the  MBTA's GLX College Avenue station in Medford with generous support from William and Joyce Cummings through Cummings Foundation, Inc. The building will support Tufts' mission of teaching and research.

"We are honored that, through the generosity of Bill and Joyce Cummings and Cummings Foundation, we have this opportunity to add an important building to the community," said Anthony P. Monaco, president of Tufts University. "The Cummings have been wonderful friends to Tufts and to the greater community, and their philanthropy has been vital to many of Tufts’ schools and programs. Their visionary project will enhance public spaces for community use and also help knit together our campus, which is separated by both the railroad right of way and Boston Avenue."

Two-thirds of the building will be located on land owned by Tufts and one-third will be built in the air rights over the MBTA Green Line College Avenue station, which is planned to open in 2020.

Tufts will work closely with the City of Medford and its neighbors during the development process, and conceptual designs reflect a commitment to community long embraced by Bill and Joyce Cummings.

While Tufts is still determining exactly how best to use the space, the university plans a home for "outward reaching" academic endeavors that will benefit from being close to public transit. Proximity to the station will foster collaboration by providing a convenient link to Tufts' health sciences campus in downtown Boston.

Initial designs for the approximately 100,000-square-foot building call for classrooms, meeting and seminar rooms, offices and other support, conference and teaching spaces. The lobby and atrium, auditoriums, classrooms, and meeting rooms will be available for use by the community. There will be no wet labs or student housing. The ground floor of the building will include some retail use to enhance the pedestrian experience.

Also planned is a footbridge spanning Boston Avenue that will provide pedestrians with a safe, convenient alternative to the busy Boston Avenue-College Avenue intersection.

The new building is part of a public-private collaboration among the City of Medford, MBTA, Tufts and Cummings Foundation. Through the partnership, the MBTA and Tufts have signed an agreement that grants Tufts a 99-year lease of air rights over the College Avenue Station and commits Tufts to pay for associated project redesign and construction changes. Tufts will also pay for ongoing maintenance and security around the station, which will amount to significant ongoing savings to the MBTA. Tufts will be granting use of its land to the MBTA for the construction of the new station at no cost to the MBTA.

Tufts has committed to pay $550,000 over four years to the City of Medford to support improvements throughout the city.

In addition, in lieu of property taxes, Tufts has pledged to pay the city $250,000 in the year that it receives a final certificate of occupancy for the Tufts building. At the start of the second year of occupancy, Tufts and the City will negotiate in good faith on an extension of the PILOT agreement, with the understanding that future payments be not less than the year one payment.

The new building will be funded entirely by Tufts through the generosity of Bill and Joyce Cummings and Cummings Foundation and through university sources. Tufts' project will not use any funds from the GLX budget, and Tufts will pay for any and all improvements that the MBTA will build on the university's behalf.

"Since I am a Medford native who received a top-notch education in Medford Public Schools and at Tufts University, this building holds special significance to me. We are thrilled to support a project that better integrates the University with the surrounding neighborhood," Bill Cummings said.

The Cummings organization has donated more than $900,000 in the city of Medford during the past four years, most recently through grants to the Boys and Girls Club, the Giving Camp, and the Medford Council on Aging. Earlier, Cummings Foundation donated $100,000 each to the Medford Clippership Park Peace Garden to honor the memory of Medford native Krystle Campbell and the others killed in the Boston Marathon bombings, Medford-Brooks Estate Land Trust, Osher Lifelong Learning Institute, the Royall House and Slave Quarters, and Solutions for Living.

Cummings Foundation, Inc. is a private operating foundation based in Woburn. Since its establishment in 1986, it has been funded primarily by Joyce and Bill Cummings of Winchester, Mass. Cummings Foundation has grown to become one of the largest charitable foundations in New England, with just more than $1.2 billion in net assets as of December 2014. It has awarded more than $100 million in grants to Greater Boston nonprofits alone.

Bill Cummings grew up in Medford, living first on Adams Street, then at 456 Salem Street, and later Cherry Street. He attended Medford public schools and, in 1958, graduated from Tufts University. Bill acquired, built and sold a well-established Medford firm, Old Medford Foods, which existed for 50 years at the rear of 54 Fulton Street in Medford. In 1966, Cummings expanded and relocated the business to Woburn. A few years later, he created Cummings Properties, a commercial real estate firm that now has a 10 million-square-foot portfolio in 10 Greater Boston communities.

Joyce Cummings grew up in Alabama and graduated from University of Alabama in 1962. After a one-year dietetic internship at Massachusetts General Hospital brought her to Boston, she ended up staying in the area. Joyce became a hospital dietician at Massachusetts Eye and Ear Infirmary, where she met Bill in the hospital kitchen in 1964.

In 2011, the Cummings became the first Massachusetts couple to join The Giving Pledge, a national philanthropic organization founded by Bill and Melinda Gates and Warren Buffett.

Tufts University, located on three Massachusetts campuses in Boston, Medford/Somerville and Grafton, and in Talloires, France, is recognized among the premier research universities in the United States. Tufts enjoys a global reputation for academic excellence and for the preparation of students as leaders in a wide range of professions. A growing number of innovative teaching and research initiatives span all Tufts campuses, and collaboration among the faculty and students in the undergraduate, graduate and professional programs across the university's schools is widely encouraged.