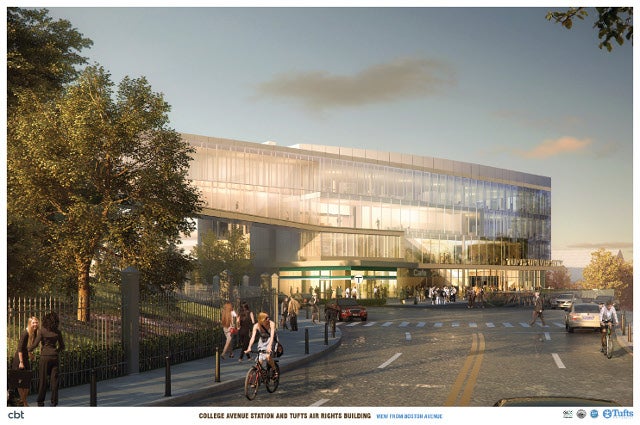 Tufts University plans to construct a 100,000-square-foot academic building above the MBTA’s College Avenue station in Medford, which is slated to open in late 2020, along with a footbridge that will connect the new facility to the Medford/Somerville campus.

President Anthony P. Monaco announced the plans at a press conference at Medford City Hall on June 15. Joining him were benefactors Bill Cummings, A58, H06, J97P, M97P, and his wife, Joyce Cummings, J97P, M97P, whose generous support through Cummings Foundation Inc. will enable construction of the building.

Preliminary designs for the new academic space call for classrooms, meeting and seminar rooms, offices and conference and teaching spaces. The lobby and atrium, classrooms and meeting spaces will be available for use by the community.

In addition to the building, the public-private collaboration among the City of Medford, the MBTA, Tufts and Cummings Foundation is expected to enhance the Green Line Extension project with public spaces that the university will maintain around the College Avenue station. The MBTA expansion project will extend the Green Line from its current terminus at the Lechmere Station in Cambridge, Massachusetts, to the intersection of Boston and College avenues in Medford. 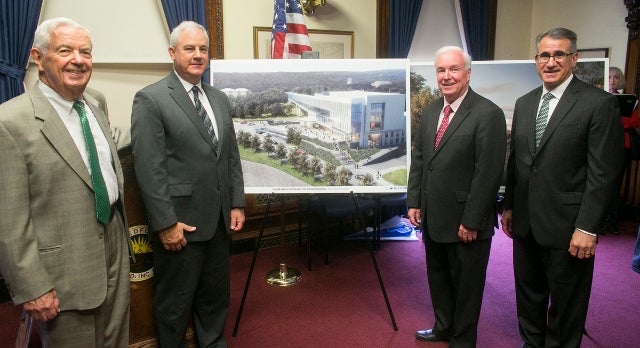 With a rendering of the planned Tufts building, from left, Bill Cummings, A58, H06; Frank DePaola, interim general manager of the Massachusetts Department of Transportation; Medford Mayor Michael McGlynn; and Tufts President Anthony P. Monaco. Photo: Matthew Healey
“We are honored that through the generosity of Bill and Joyce Cummings and Cummings Foundation, we have this opportunity to add an important building to the community,” said Monaco. “The Cummings have been wonderful friends to Tufts and to the greater community, and their philanthropy has been vital to many of Tufts’ schools and programs. Their visionary project will enhance public spaces for community use and also help knit together our campus, which is separated by both the railroad right of way and Boston Avenue.”

Two-thirds of the building will be located on land Tufts owns near Halligan Hall, and one-third will be built in the air rights above the MBTA Green Line College Avenue station.

Tufts and the MBTA have signed an agreement granting the university a 99-year lease for the air rights. The arrangement calls for Tufts to pay for associated project redesign and construction changes to previous plans for the Green Line station in Medford, as well as ongoing maintenance and security around the station.

The university is moving forward with the design and application for permits for the footbridge that will connect the station to the campus and increase pedestrian safety by reducing foot traffic across the busy intersection of College and Boston avenues.

The project will also include more accessible sidewalks, a landscaped pathway to the adjacent neighborhood bordered by Burget Avenue and retail space, such as a coffee shop, for T riders, neighbors, faculty, students and staff.

“Tufts is excited to have the opportunity to work with the City of Medford, Mayor Michael McGlynn and the MBTA on the construction of a new public transit station in our neighborhood,” Monaco said. “This station will support our efforts to reduce the number of cars that come to the campus regularly—a sustainable outcome we all support.”

Monaco praised the hard work of city and MBTA officials in bringing the project to fruition. “Over the past 28 years, Mayor McGlynn has been a true friend to Tufts, and today’s announcement is yet another example of our strong partnership.”

He acknowledged the important collaboration with Frank DePaola, interim general manager of the Massachusetts Department of Transportation, and the MBTA team. “Neither the Tufts building nor its amenities would be possible without the significant work the MBTA has already done on the College Avenue station,” Monaco said.

Tufts will provide $550,000 over four years to Medford for public enhancements throughout the city. Tufts has also pledged an additional $250,000 to the city in lieu of taxes when the university receives a final certificate of occupancy for the building and will make additional payments in subsequent years.

While Tufts is still determining how best to use the space, the building is envisioned as a home for “outward-reaching” academic endeavors that will benefit from being near public transportation. Proximity to the new T station will foster greater collaboration between faculty and students on the Medford/Somerville campus and those on the health sciences campus in downtown Boston, Monaco said. He noted that the building will not be used for student housing or for “wet” laboratories handling liquid or volatile materials.

Bill Cummings, a business leader, philanthropist and Tufts University trustee emeritus, acknowledged his Medford roots and commitment to the city. “Since I am a Medford native who received a top-notch education in the Medford Public Schools and at Tufts University, this building holds special significance to me,” he said. “We are thrilled to support a project that better integrates the university with the surrounding neighborhood.”

Since its establishment in 1986, Cummings Foundation has become one of the largest charitable foundations in New England, awarding more than $100 million in grants to Greater Boston nonprofits alone.

Monaco said Tufts plans to work closely with the community as the project continues to unfold. Residents from the adjacent neighborhood have already met with university officials to discuss preliminary designs. Tufts faculty and others will be involved as the university determines how best to use the new space to support its academic mission.

A public meeting about the project will take place on June 25, starting at 6 p.m., at St. Clement School, 579 Boston Ave., Medford.