Major projects continue while upgrades are underway on many smaller buildings 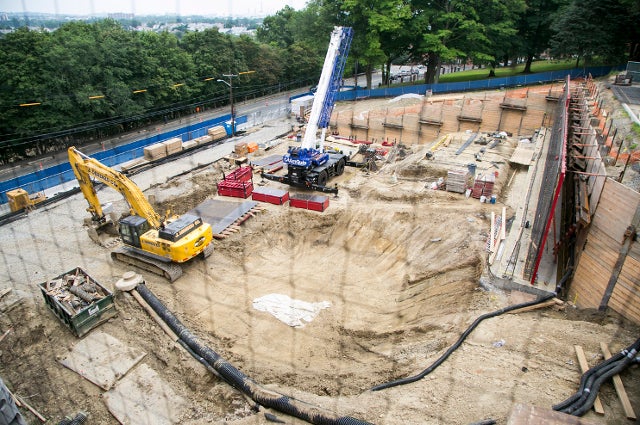 When students return to Tufts in the fall, they will benefit from the annual burst of activity that takes place during the summer months. Construction projects ranging from new buildings to kitchen and bathroom upgrades are in the works on all three campuses.

Four major projects were already underway long before the start of the summer. On the Medford/Somerville campus, work is continuing on the Science and Engineering Complex, the Central Energy Plant and the Memorial Steps. In Grafton, the Foster Hospital for Small Animals is undergoing a major expansion and renovation.

The Science and Engineering Complex, or SEC, as it is known, should be completed by August 2017. The five-story, 80,000-square-foot building is on a parcel of land that fronts Dearborn Road, behind Anderson and Robinson halls. The building will be an integrated teaching and research center and feature state-of-the-art laboratories that will foster interdisciplinary research on selected themes. Environmental science and neuroscience have been chosen as initial areas of inquiry.

The Central Energy Plant, located on Boston Avenue in Medford, just south of Dowling Hall, is replacing an aging 60-year-old plant, which will be demolished when the new plant is up and running; completion is expected by the summer of 2016. The plant, which will generate heat, electricity and chilled water, will reduce greenhouse gas emissions by at least 12 percent and is expected to lower energy costs by more than 20 percent each year. 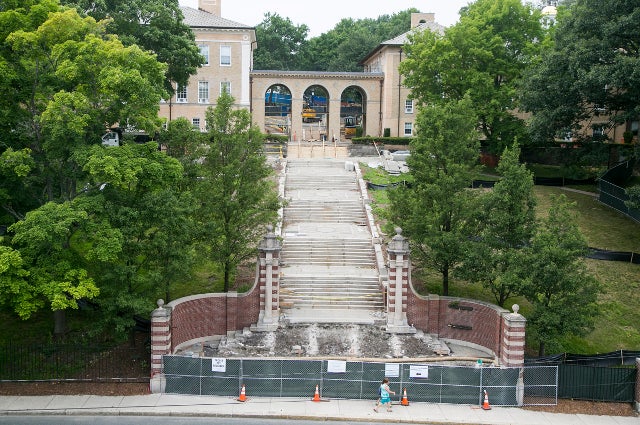 The Memorial Steps project will be completed by November. Photo: Kelvin Ma
The Memorial Steps are being completely repaired; work extends from the bottom of the steps along College Avenue to Upper Campus Road in front of Paige and Miner halls. A snow-melt system under the stairs will be installed, and a landscaped seating area will be added at the top of the stairs. A new foundation will help minimize deterioration. Construction of the upper portion of the stairs, connecting to the hillside, will be completed by the start of classes in the fall, while the remaining portion, to the base at College Avenue, will be finished by November.

Construction on the 30-year-old Foster Hospital for Small Animals at Cummings School will add 4,552 square feet of space. Scheduled for completion in March 2016, the project will create a larger, more welcoming reception, more exam rooms and a new reflection room where clients can make decisions about their pets’ care. Students and faculty will benefit from larger teaching and treatment areas that will promote greater collaboration as well as opportunities to conduct research and clinical trials.

In Boston, two key projects are underway. The Gross Anatomy Lab at the School of Medicine is getting a new ventilation system to improve air quality. The laboratory is used by both medical and dental students who work on cadavers. When the project is completed, the temperature will be a consistent 65 degrees, with 20 changes of air per hour. Designed for 50 students at a time, the laboratory usually houses twice as many students and will be enlarged to accommodate those numbers. Construction should be finished by mid-August.

The School of Dental Medicine is in the second phase of upgrading its patient clinics. The third floor was completed last year; this year’s work focuses on the fourth floor, where new cabinets and furniture will be installed.

On the Medford/Somerville campus a variety of projects are taking place to refurbish houses and small residences. 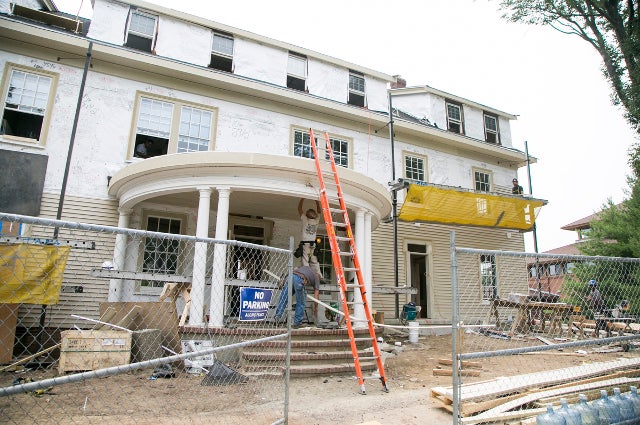 Richardson House takes on a different look this summer. Photo: Kelvin Ma
Richardson House on Professors Row, which was built in 1857 and houses 42 students, is undergoing major interior and exterior renovations. New siding and windows are being installed, and the kitchen, bathrooms and common areas are being upgraded. The entry and first floor will now be fully accessible, with the addition of a ramp and enhanced bathroom, kitchen and laundry facilities. The front entrance patio will be repaired, and landscaping will include the addition of new plantings. Construction will be completed in mid-August. 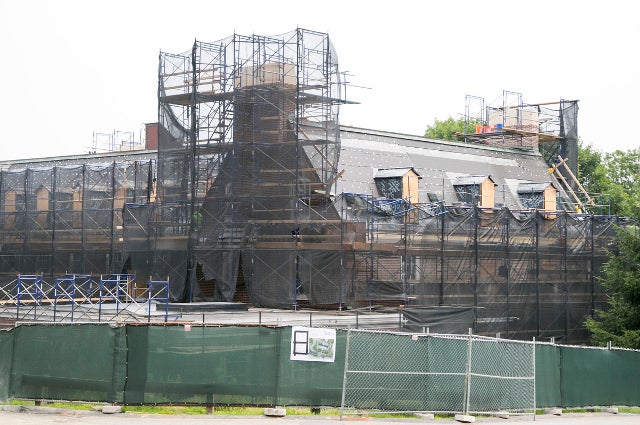 Stratton Hall is getting a facelift. Photo: Kelvin Ma
Stratton Hall is another historic residence on Talbot Avenue that houses 50 seniors; work includes cleaning and repointing brick, as well as the installation of a new roof, copper gutters and new windows. This is a two-year project, with the first phase taking place this summer. Next summer, renovations will be made to the first floor, and the foundation will be improved.

The house at 45 Sawyer Street, built in 1920, has 10 beds for undergraduates. It is undergoing major interior and exterior renovations, including new siding and windows, while the kitchen, bathrooms and common areas are getting an upgrade.

92 Professors Row is a university-owned building that currently houses Sigma Phi Epsilon fraternity; it was built in 1875 and has 5,000 square feet and 10 beds. The bathroom, kitchen and common areas are being upgraded.

Carpenter House, off Curtis Street, will see an upgrade in the bathrooms, kitchen and common areas, as well as a rear door replacement and some excavation in the front of the building to replace the existing sewer line. Construction will be finished in mid-August.

The turf on Bello Field will be replaced this summer. The original material was installed 10 years ago and has deteriorated. The replacement material, called Spinturf, is technologically superior to the existing surface while also taking advantage of post-consumer recycled materials.

Cabot, Mugar and Goddard halls, all in the Cabot building complex, will see fire alarm upgrades by the end of August, which will replace an aging system that is not always reliable. The system will allow emergency personnel to communicate with the building’s occupants.