Every summer, Sarah Shugars trades her desk at Tisch College for stilts and juggling balls, helping to run the OPENAIR Circus in Somerville 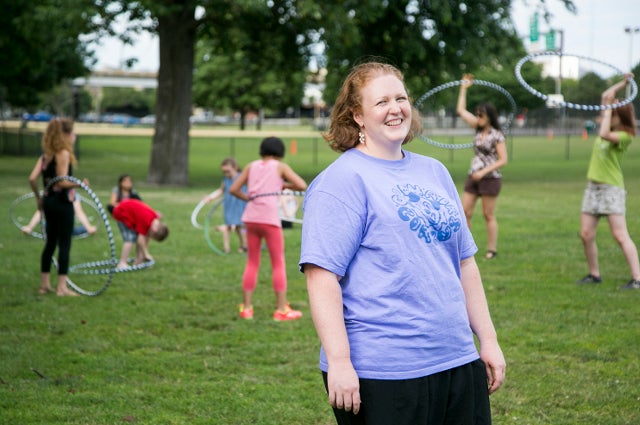 When most people go house hunting, they look for sleek granite countertops or hardwood floors. Sarah Shugars and her husband had other needs: enough space to store 100 pairs of stilts—and juggling balls, batons, unicycles, masks, hula hoops and other circus equipment.

Shugars, the communications manager for the Jonathan M. Tisch College of Citizenship and Public Service, needed the storage for her volunteer work as general factotum for the OPENAIR Circus in Somerville, Massachusetts, founded 30 years ago by a group of local families eager to create a safe outlet for their children. This summer, some 150 children ages 3 and up—including some adults—are learning to walk on stilts, mime, perform magic tricks and juggle.

“I always told my parents I’d run away to join the circus,” Shugars says, laughing. She didn’t, but she signed up when she met her husband, Peter Jehlen, whose parents are among the founders of the nonprofit circus. Jehlen serves as volunteer chair. And Shugars? “I do a little bit of everything.” In other words, she’s the one who makes sure the show goes on.

True to its name, OPENAIR Circus classes are held in parks throughout Somerville. Some of the children who took part in the early years now teach classes in tumbling, unicycling, clowning and other circus arts. The grand finale each summer is four performances at Nunziato Park outside Union Square. This year’s shows will take place on July 31 at 7 p.m., Aug. 1 at 2 and 7 p.m. and Aug. 2 at 2 p.m., with a suggested donation of $3.

Every summer Shugars takes what she calls “circus vacations” for rehearsals and performances. She uses her communications skills to write, edit and produce the programs. One ad that appears regularly in the programs comes from Jehlen’s mother, State Sen. Pat Jehlen, who always runs a photo of herself on stilts under the headline “The World’s Only Stilting State Senator.” 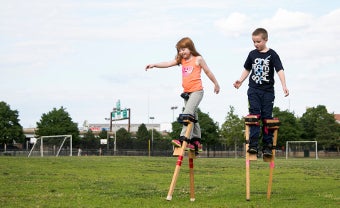 Practice makes perfect at the circus camp. Photo: Kelvin Ma
Shugars can walk on stilts (her husband taught her), though she says it wasn’t easy and isn’t something she does much nowadays. But she does teach others, letting them hold on to her for dear life as they wobble along, trying to keep their balance.

Some pick it up right away; others don’t. “A lot of it is about confidence,” she says. “Some people say, ‘Nope, it’s not going to happen.’ It’s not for everybody, but for the most part, it’s a skill pretty much anyone can learn.” The circus makes its own wooden stilts, and Shugars has manufactured her share.

Her volunteer work fits neatly into her work at Tisch College. “Part of what we believe at Tisch College is that everyone should be engaged in their community, and everyone does better when people are engaged,” she says. “There are ways to find time to do these things, and they can be a priority in your life.”

Shugars continues to be drawn in by the mission of the OPENAIR Circus. “The circus teaches what it means to be part of a community, how to interact with others,” she says. “There are so many kids who feel like they don’t fit in at other places, but everyone fits in at the circus. We encourage kids to be themselves and do whatever they love to do, and no one judges them for it.”

The circus “teaches a lot about how to try things that are hard, and to be OK when you make a mistake,” she says. “And it shows kids that you have to work hard and practice a lot.”

Enrollment costs are low—$20 for the summer—and the circus is open to everyone. It is run entirely by volunteers and a few professionals who are paid to teach.

The circus isn’t Shugars’ only volunteer gig; she is also on the boards of Somerville Local First, which supports local businesses, and the Welcome Project, which strengthens the civic voice of immigrants. 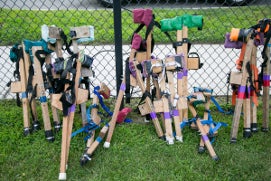 Some of the stilts used by the circus lovers. Photo: Kelvin Ma
She will be stepping back from some of these efforts, though, as she prepares for her next big act: she will leave Tufts in August to start a Ph.D. program at Northeastern University in network science, a new field that involves complex network systems such as computer, semantic and social networks.

But she will continue to make sure the show goes on. This summer Shugars and her husband will drive from park to park, stilts loaded into the back of their car. And at the end of the season, that large basement in their home will come in handy until next year.