A Bacterial Sensor—on a Glove 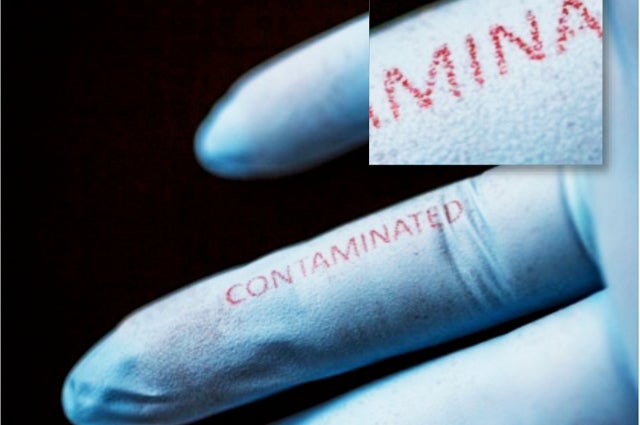 A surgeon is about to make an incision when the word “contaminated” appears in bright red letters across her gloves, which have inadvertently picked up harmful bacteria. What does it take to deliver that warning? A little silk and an inkjet printer.

Pioneering work by a team of Tufts researchers led by Fiorenzo Omenetto, the Frank C. Doble Professor of Engineering, has led to the development of “conformal” biosensors—silk-based inks containing any number of compounds and applied with an ordinary inkjet printer on multiple surfaces. Such sensors could, for example, detect harmful bacteria on surgical gloves and help prevent some of the estimated 1.7 million infections hospitalized patients acquire each year.

The research, published in the journal Advanced Materials in June, may be of great impact in medicine and other fields. The potential applications are limited only by the imagination, says Omenetto, associate dean for research at the School of Engineering.

In their paper, the researchers describe the development of customized silk-based inks containing molecules that change color in the presence of the bacterium E. coli, proteins that stimulate tissue growth and gold nanoparticles that heat on demand or function as optical sensors, among other uses. The research was supported by the Office of Naval Research and the Air Force Office of Scientific Research.

“Silk is unique because it does multiple things well,” says Omenetto, the paper’s senior author. “The fact that we can now activate [the silk-based ink] with so many mixers makes it particularly powerful. It gives us the ability to print arbitrary sensors on arbitrary surfaces.”

Stable, chemically neutral and nontoxic, purified silk protein—or fibroin—achieves the perfect viscosity for use in an inkjet printer when it’s dissolved in water. It’s also biocompatible, meaning it doesn’t trigger an immune response when introduced into the body. This happy accident of nature is one reason why David Kaplan, the Stern Family Professor of Engineering and chair of the Department of Biomedical Engineering at Tufts, who is one of the paper’s co-authors, has been studying silk’s potential as a biomedical/bioengineering material for 15 years.

“Not only is the material naturally good, there happens to be a lot of resident expertise here at Tufts,” says Omenetto. “The body of knowledge is growing every second here, and David [Kaplan] certainly was an amazing catalyst.”

In addition to the germ-detecting surgical gloves, Omenetto imagines one day taking a digital photo of a complex wound—maybe a battlefield injury, for example—and sending that snapshot to an inkjet printer. The result might be a custom bandage that could be impregnated with antibiotics and tissue growth factors—compounds that encourage healing by stimulating skin, muscle and/or bone growth. Such a bandage could distribute the medicine to targeted areas of the wound.

These ideas first percolated in Omenetto’s lab around 2007, he recalls, as the team was working on a drug-delivery project. The researchers added an optical element to silk film that reflected light differently under different conditions. In their early experiments, the team used it to detect the amount of oxygen present in a sample of blood. Omenetto and his colleagues soon came up with the idea of a silk film embedded with sensors that would alert people to the presence of harmful bacteria.

Because silk is extremely stable, easy to work with and nontoxic to people and the environment, Omenetto sees it as a potential green replacement for plastics and other inorganic compounds used in high-tech fields. Harnessing silk’s versatility, he says, could mean decreasing industry’s carbon footprint and toxic waste output without sacrificing technological performance.

“Eventually, materials will have to change,” he says. “It’s going to become simply unsustainable to live consuming nonrenewable materials the way we do today.”