Patients with the autoimmune disease soldier on despite fatigue, depression and cognitive issues, a Tufts study finds 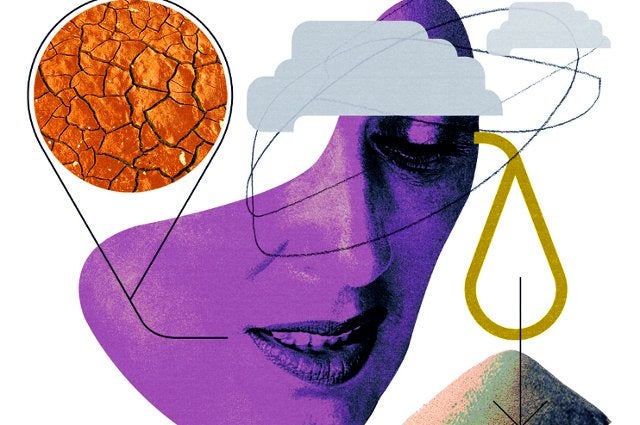 Sjögren’s syndrome is a common autoimmune disease, affecting as many as 4 million Americans, 90 percent of them women. Dry mouth and dry eyes are its hallmark symptoms, a result of the body’s own white blood cells attacking the glands that produce saliva and tears. The dryness can lead to constantly burning eyes, tooth loss, acid reflux and trouble swallowing.

But the burden of the disease does not stop there. Many patients also report fatigue, depression, anxiety and trouble with concentration and memory.

“These women’s quality of life is severely affected, and yet nobody can see it from the outside,” says Athena Papas, J66, Erling Johansen Professor of Dental Research and head of the division of oral medicine at the School of Dental Medicine.

A new study from Tufts’ medical and dental schools brings researchers closer to understanding how to help patients cope with its diverse symptoms.

Most Sjögren’s research has focused on the dryness symptoms, but for this study, published in Clinical Rheumatology, scientists wanted to investigate the severity of the cognitive and fatigue symptoms. They looked at 37 people who have Sjögren’s and 37 people with no history of autoimmune disease. In questionnaires, they asked all 74 study participants to describe their cognitive function and fatigue levels, and then ran them through a battery of tests to objectively measure their cognitive, psychological and physical health.

In the end, although the Sjögren’s patients reported significantly greater difficulty with issues such as remembering what they went to the store to buy or keeping a train of thought, and they were more likely to report being depressed, they scored similarly to the control patients on the objective tests for the most part. Only two tests—one that required matching numbers to corresponding symbols and one that asked them to recall words from a list—showed small but significant decreases in cognitive function among those with Sjögren’s.

“The fact that most of the objective performance decrements of the patients did not differ significantly from those of matched controls should not minimize concerns,” says Lynn C. Epstein, a clinical professor of psychiatry at Tufts School of Medicine and the co-principal investigator on the study with Papas.

Rather, she says, it shows that patients are able to compensate somewhat for a short time, despite having both a substantial physical burden and significant fatigue and impaired function. “It speaks to their determination and commitment to maximize functioning.”

Senior author David J. Greenblatt, the Louis Lasagna Professor of Pharmacology and Experimental Therapeutics at Tufts School of Medicine, agrees. “Their complaints are real,” he emphasizes. “Our interpretation is that they are heroically struggling to keep pace and stay employed and to remain positive and upbeat. There is a large cost in terms of energy and fatigue as a result of it.”

Quantifying the severity of all the symptoms of Sjögren’s will help inform future research, which ideally would include a study following patients over time.

“Seeing changes in symptoms over time helps identify a target to treat with biological therapy,” says Papas. Such therapies are different from chemically derived drugs. Instead, they are antibodies that target particular proteins and cells and then block the process that causes inflammation and other symptoms. There are currently no approved biologics for Sjögren’s.

This article first appeared in the Spring 2015 issue of Tufts Dental Medicine magazine.

What Your Blood Type Can Tell You About Your Health

Five Tips for an Ergonomic Workstation