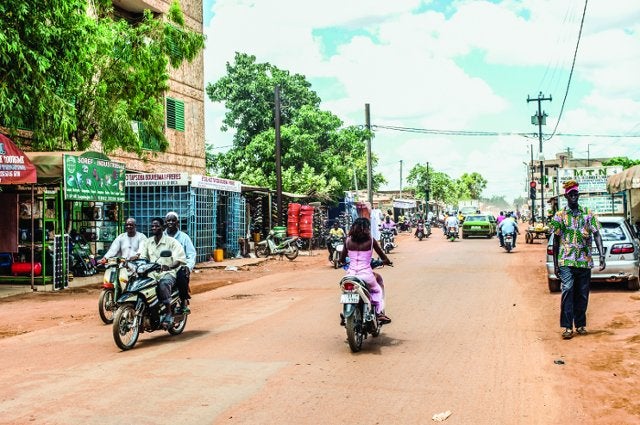 I knew it was a bad idea to get back on Bawa’s motorbike in the middle of a torrential rainstorm that night. Some of the potholes in Ouagadougou, the capital of Burkina Faso, the West African nation in which I was conducting ethnographic interviews, had turned into veritable ponds.

But Bawa, my host, had been kind enough to ferry me between migrant neighborhoods for my research, and now it was time to head back to my lodgings. On top of that, Bawa was the eldest son of the chief I had first met 17 years before, who had since died. I was in Bawa’s care now, and it would have been gauche to question his judgment.

So even as warnings like “This is not a good idea,” “I am taking a chance,” and “C’est dangereux” formed in my mind, we set off on the drenching ride across this city of two-wheel transport and no helmets. I reminded myself of the statistical unlikelihood that a road accident would occur while I was actually contemplating it—a talisman I hoped would ward off the frightful event.

Rather than watching the pavement as we bumped along it, I shielded my face from the unremitting rain in the hood of my jacket. That is, until the bike began swerving violently from side to side. “It is happening,” I then had to admit to myself. “It really is happening.”

Bawa and I flew off his motorbike onto the hard pavement, and I did a kind of bounce and flip before scrambling to my feet to avoid being hit by oncoming traffic. My watch and glasses were smashed to smithereens. When I saw the grimace on Bawa’s face and blood spilling from mine, I knew I had been pretty badly smashed, too. “I want to bring you to the local clinic,” Bawa declared, in the Hausa language we had in common. But how? His bike was mangled.

“Frère!” he yelled into the pitch-black night, waving to those of his Muslim brethren who were foolhardy enough to be plying the highway. “Frère! Frère!” And a brother responded. A man in a flowing robe and kufi—the pillbox cap favored by the Muslim community—did a turnaround to see what the fuss was about. He too grimaced when he saw my face.

The two spoke in what I took to be Mossi, the most common language in Burkina Faso, of which I know not a word. I was reluctant to be “rescued” on yet another motorbike, by a stranger with whom I could barely speak. Nor did I wish to be separated from my host, or to be treated in the kind of facility the Peace Corps, which had first brought me to West Africa 37 years before, had warned us to avoid.

But what choice did I have? My host’s scooter was broken, and I was bleeding. We sped off, then stopped to ask a woman on another scooter for directions. She looked at me, grimaced and instructed my new driver.

When the “doctor” (really, a paramedic) at the clinic saw me, he grimaced in the manner to which I was becoming accustomed. “We’ll have to sew him up,” he said to the pharmacist on call, “to avoid infection.” I thought that avoidance of infection might have warranted some cover on the examining table, but I was not sent here to give advice. I would happily have paid for it, just as I had to pay for the medic’s disposable rubber gloves, the bandage and antiseptic. And in this land of scarcity, they had me purchase in advance the same items for my follow-up appointment, just in case they ran out.

My Good Muslim Samaritan left me after Bawa arrived, apologizing in rudimentary French that he had to “continue.” But he phoned me at 1 a.m. to ask how I was doing, and again the following day.

Two weeks later, when I limped into my classroom in Boston at the start of the fall term—a plastic boot on my foot to protect a fractured fibula, and my left eye crowned by five cordlike sutures reminiscent of Frankenstein’s—my accident turned into a lesson.

Last summer, when these events occurred, two American journalists had just been beheaded in the name of Islam. The Muslim Brotherhood was being vilified as a terrorist organization in Egypt. And American culture was infected, as it still is, with Islamophobia. Even though I wondered how much an instructor should tell students about his health travails, I knew I had to share my experiences with Islam.

Having lived for years in Muslim West Africa—first as a Peace Corps volunteer, then as a Fulbright scholar, with intermediate stints thanks to the State Department and various research sponsors—I had come to rely on the communitarian spirit fostered by Islam. I tried to impress upon students the most important thing I had learned: that the real “Muslim brotherhood” is one that extends its assistance to all in need, including the white stranger from America.

William F.S. Miles, F82, is a professor of political science and former Stotsky Professor of Jewish Historical and Cultural Studies at Northeastern University. His most recent book is Scars of Partition: Postcolonial Legacies in French and British Borderlands.

This article first appeared in the Summer 2015 issue of Tufts Magazine.