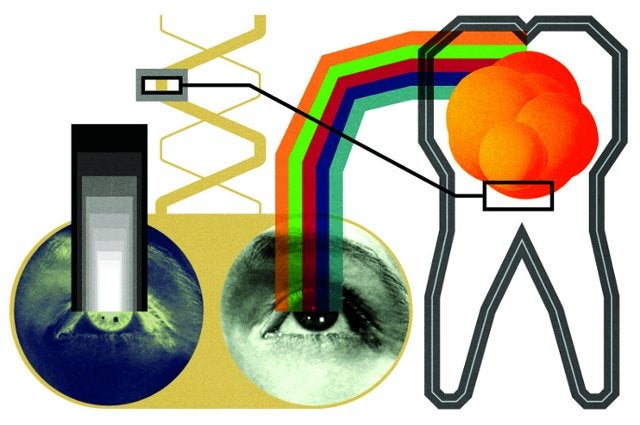 More than 15 million Americans suffer from age-related macular degeneration, a disease that can rob patients of their sight. It starts slowly. Over the course of months or years, lumps of cellular debris and new blood vessels can form in the retina, damaging tissue and causing progressive blindness—and in many cases, the effects of the disease are irreversible.

Researchers at Tufts are trying to improve those odds. They are exploring new ways to replace damaged retinal tissue using cells from an unlikely source: a patient’s own dental pulp.

“[Dental] pulp cells and retinal cells share a common progenitor in the body,” says stem cell biologist Behzad Gerami-Naini, an assistant professor at the School of Dental Medicine, who is leading the research. “As an embryo develops, certain stem cells differentiate into retinal tissue, fat cells, bone cells or tooth pulp—so all those cell types are actually related on some level.” Because the cells share the same origin, Gerami-Naini says that it may be possible to “reprogram” them in the lab, gently coaxing them into becoming retinal cells.

The key to this cellular transformation, he adds, lies in manipulating a set of genetic instructions that tell stem cells which genes should be turned on or off at any given time. These instructions, called the “epigenome,” effectively act like a series of molecular bookmarks, flagging snippets of DNA that contain the recipe to make a nerve cell, retina, tooth pulp or other specialized tissue. By rearranging those bookmarks, he says, it’s possible to alter which “recipe” a cell uses to determine its final form.

Gerami-Naini is no stranger to working with stem cells in this way. His team has already shown that it’s possible to “reboot” human skin cells, sending them back into an embryonic-like form, called an induced pluripotent stem cell (iPS), which has the potential to become any type of cell in the human body. Using iPS cells as a starting point, the team has been able to grow healthy retinal cells that theoretically could be implanted into the eye to repair damage from macular degeneration.

There’s a catch, however. The iPS process, which Japanese researchers pioneered in 2006, normally uses a lab-made virus to inject new genes into a cell’s DNA that erase existing genetic bookmarks. The use of such viruses can create stumbling blocks to approval from the U.S. Food and Drug Administration, because they have the potential to cause unpredictable changes to a cell’s genetic code.

“There are still many safety concerns,” says Benjamin Chan, D10, DG13, a clinical instructor of orthodontics at Tufts who is a collaborator on the research. “In order to perform clinical trials, you have to first show there won’t be any [unintended] viral effects [to the genome].”

Dental pulp stem cells, however, may help avoid those complications. Instead of relying on viruses, the Tufts team believes it may be possible to manipulate the pulp cells’ DNA—effectively forcing them to change their form—by using existing chemicals and growth media.

Creating virus-free cells is just one part of the challenge, however. “Treating macular degeneration isn’t as simple as just injecting new retinal cells into the eye,” says team collaborator Sheldon Rowan, a scientist in the Nutrition and Vision Laboratory at the Jean Mayer USDA Human Nutrition Research Center on Aging at Tufts. “The retina is a complex structure. Each cell has a specific orientation that needs to be maintained to keep the tissue healthy in the long run.”

In order to create tissue that could be used for implantation, Rowan says, the research team first needs to grow its cells on a microscopic scaffold that mimics the underlying membrane of the retina. They’re working with David Kaplan, director of Tufts’ Tissue Engineering Resource Center, to build a series of tiny silk structures that recreate the web-like structure of the retina membrane. The researchers plan to grow their cells on these scaffolds to see whether they can generate a healthy piece of three-dimensional retinal tissue.

Gerami-Naini is quick to note that the research is still in the early stages, but the results look promising. If the team is successful, that could be good news for patients diagnosed with age-related macular degeneration, he says.

This article first appeared in the Spring 2015 issue of Tufts Dental Medicine magazine.