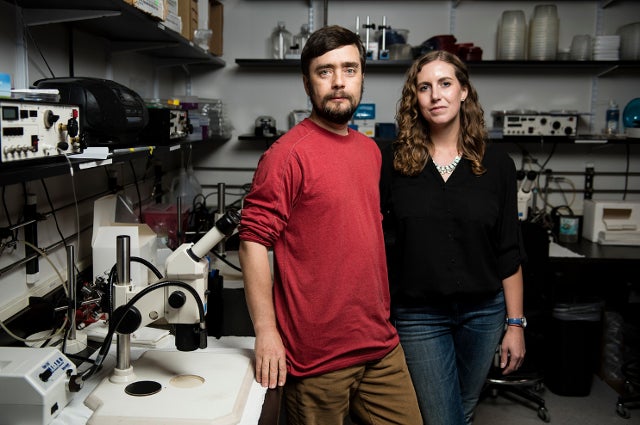 Uncle Joe smokes a pack a day, drinks like a fish and lives to a ripe old age. His brother, leading a similar lifestyle, succumbs to cancer at age 55. Why do some individuals develop certain diseases or disorders while others do not? In newly reported research that could help provide answers, scientists at Tufts University and the University of Florida have used artificial intelligence to illuminate fundamental cellular processes and suggest potential targets to correct biological missteps.

The findings, published Oct. 6 in Science Signaling online, are believed to mark the first time artificial intelligence has been used to discover a molecular model that explains why some groups of cells deviate from normal development during embryogenesis, says senior author Michael Levin, A92, the Vannevar Bush Professor of Biology at Tufts and director of the university’s Center for Regenerative and Developmental Biology.

The research could lay the groundwork for a future medical screening system that could pinpoint precisely where a molecular pathway takes a wrong turn, producing cancer, diabetes or developmental disorders—and then identify a way to fix it.

The latest findings build on the center’s earlier studies to understand the development and metastasis of melanoma-like cells in tadpoles, as well as work applying artificial intelligence to help explain planarian regeneration. The new findings, Levin says, indicate that “our methodology can be taken well beyond simple organisms and applied to the physiology of cell behavior in vertebrates.” 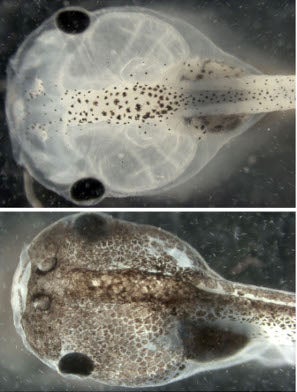 Top: A normal tadpole. Bottom: a tadpole in which the pigment cells’ normal bioelectrical signaling was interrupted, causing the cells to become unusually dark and develop melanoma-like characteristics. Photo: Courtesy of the Levin Lab/Tufts University
For the Science Signaling work, the researchers used a type of artificial intelligence called evolutionary computation to pinpoint the molecular mechanisms underlying the earlier research, in which they induced normal pigment cells in the embryos of a species of African frog to metastasize. They used a series of drugs to disrupt the cells’ normal bioelectrical and serotonergic signaling at a crucial stage of development.

Even in the absence of DNA damage or exposure to carcinogens, the pigment cells of the affected embryos acquired bizarre, branch-like shapes and developed other melanoma-like characteristics, proliferating uncontrollably and invading the frogs’ internal organs.

What’s more, depending on which protein in the bioelectric pathway was tweaked, only a certain percentage of the frogs developed melanoma, while the rest remained healthy. “There’s randomness to this process,” Levin says. “It doesn’t have the same result in all animals exposed to precisely the same agent, which may mimic the variability in human responses to cancer-inducing stimuli.”

Furthermore, the tadpoles that did develop melanoma did so in every pigment cell—each frog was either 100 percent metastatic or completely normal. Essentially, Levin says, all pigment cells in a tadpole are part of a single coin, which either flips heads (normal) or tails (cancerous). “Metastasis appears to be a group dynamic rather than a single-cell decision,” he says.

The researchers used evolutionary computation to understand this complex cell behavior. Maria Lobikin, G15, who received her Ph.D. in biology working in Levin’s lab and is the first author on the Science Signaling paper, first identified the building blocks—receptors, hormones and other signaling proteins—of the serotonergic signaling pathway that regulated the behavior of the melanoma-like cells. Then the researchers used evolutionary computation, which mimics evolution, to generate a chemical signaling network in a “virtual embryo” that exhibited the same behavior that the researchers observed in their experiments with real tadpoles.

Like biological evolution, evolutionary computation does not randomly or exhaustively test each possibility, but uses incremental improvement and selection to rapidly converge on a solution. “The artificial intelligence system evolved a pathway that correctly explains all the existing data,” Levin says. “Best of all, it also made correct predictions on data it had never seen.”

“This suggests that future application of artificial intelligence methods to problems of development and cancer will give rise not only to correct predictions, but also to deep understanding of the complex dynamics we seek to control and repair,” the researchers write in Science Signaling. The work was partly funded by the G. Harold and Leila Y. Mathers Charitable Foundation.

The knowledge gleaned about these molecular signaling pathways has implications for identifying new treatments and targets for tumor prevention, and for better understanding many other seemingly random decisions made by cells in living organisms. When enough data are available, Levin says, researchers could use this approach to develop a system to help physicians understand patients’ individual genetic responses to treatments as well as environmental factors that cause cancer.

With such a tool, “you could say that if all signs point toward a negative outcome, what would I need to do to prevent that?” Levin says. “Where in this pathway do I need to intervene and how?”

Deborah Halber is a freelance writer based in Lexington, Massachusetts.

The Robot That Makes Dinner