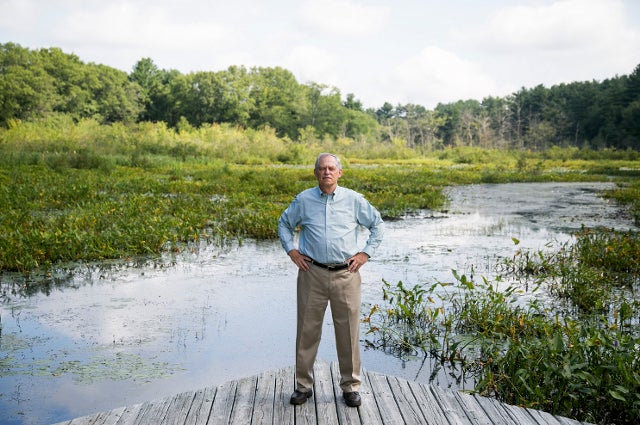 Growing up in the industrial community of Bayonne, N.J., Barry Levy, A66, began to get interested in environmental issues. “My dad often drove me through the industrial area of town, and I became interested in how the oil refineries and the factories there impacted the environment and people’s health,” he says. Levy later broadened his interest to include public health and preventive medicine.

These global experiences inform his sense of climate threats in the world. “Having lived in Kenya and China, I know they are not far-off lands where the threats are theoretical,” he says. “I know people who are there now. I know firsthand that the existing public health threats are challenging enough without this whole new set of issues.”

These issues form the basis for Climate Change and Public Health, just out from Oxford University Press, which Levy co-edited with Jonathan Patz. The book is scholarly, detailed and readable—not to mention sobering—as it walks a reader through the many health implications of a planet that’s growing warmer by the year. It received the 2015 Environmental Health Book of the Year Award, given by the American Journal of Nursing.

Tufts Now: There has already been so much talk in the media about climate change. What don’t people understand about its impact on their health?

One aspect of misunderstanding is that some people interpret what we’re talking about as simply “global warming.” Indeed, temperatures are increasing on average, across the world. But as we’ve seen over the last two winters here in the Northeast, some parts of the world may have colder seasons, even though on average there’s a steady, progressive increase of warming temperatures.

People generally don’t understand that air pollution will get worse with climate change; that pollen production will increase, causing more allergic disorders like seasonal allergies; that change in the location of various vectors, such as ticks and mosquitoes, will have adverse effects.

What are some specific examples of how these changes increase the spread of disease?

Certain mosquitoes normally confined to the tropics are moving steadily northward. For example, Chikungunya fever, which is a viral illness, is spreading in Puerto Rico and other places in the Caribbean where it hasn’t been seen before. West Nile virus has spread more, in part because of changing climate conditions, which affect the breeding of mosquitoes.

The change is not only geographic, but also reflective of changes in elevation. We are seeing changes in the pattern of malaria in Africa, in certain parts of East Africa in the highlands. Nairobi is a city at 5,000 feet that has been cooler than surrounding areas and has been protected in a sense by that coolness. As cities like Nairobi warm, that protection is no longer present. We’re finding that in certain parts of East Africa that have been malaria-free for many years malaria is now occurring.

Rainfall patterns are changing, and even in places where there may not be a net change in rainfall, it’s likely that there will be more episodes of heavy rainfall, resulting in more floods. When floods happen, there are a number of increased risks to health, not only related to people being displaced from their homes, or seriously injured. In some places there is likely to be sewage contamination of drinking water, causing waterborne diseases. In fact, our contributing authors in India performed a study showing that gastrointestinal illness increased after heavy rainfall.

I hear you saying that although people may have gotten the broad strokes of the climate change story, the devil’s in the details.

That’s right. And certain parts of the world are going to feel this a lot more than others. Sea-level rise may be less of an issue for people living in the Midwest, but for those of us living in the Boston area, or Florida, or other parts of the East Coast, as the sea level rises there are going to be profound changes—and even more profound changes in places like Bangladesh, much of which is at sea level, and where well over 150 million people live. Many of these people will be displaced as “climate refugees.”

You use the term “risk multiplier” in the book. What does this mean, exactly?

Climate change is a risk multiplier. What this means is that many of the existing public health problems will be enhanced, so that people who are already suffering from, say, ill effects of air pollution, or water pollution, or who are living in areas where vector-borne diseases are endemic, or living in hot areas and suffering the effects of heat, will see these problems increase significantly.

What about the effects on people with chronic conditions such as heart, lung or kidney disease?

These people are often already at increased risk as a result of high heat. Many of these people are older; many of them are living alone; many may not have air conditioning. They may not have a social network of people supporting them. Increased heat often puts people with heart, lung or kidney disease at increased risk of morbidity and mortality.

The same is true with regard to air pollution. People with chronic obstructive lung disease and people with asthma are likely to have exacerbation of their chronic conditions, and there will be increased mortality as a result.

Let’s talk about food. What is likely to happen to the world’s food supply and security?

It’s certainly being threatened. The food supply is always a challenge for a number of reasons, and it’s not always an issue of growing enough food—it may be issues related to spoilage of food and to the price of food. In certain parts of the world, supply and demand is such that, while there’s enough food being produced, much of it is being exported to other countries.

A number of these issues are tied together. The civil war in Syria is in part due to a drought that caused thousands of farmers to leave their farms and move to cities, where they failed to find jobs and protested against the government, which was not addressing their concerns.

Social justice seems to run all through this. Is it fair to say that those areas of the world most likely to be hit hardest by climate change are the least advantaged and most neglected?

Yes, that’s right. And even in developed, high-income countries like the U.S. it’s the people living in poverty and already bearing the brunt of various forms of social injustice who are most at risk.

Where does mental health fit into the picture?

You mention a farmer who can no longer farm the land and so must travel elsewhere for work. Are we looking at roving hordes of desperate people?

It’s hard to predict how many climate refugees there will be—there could be millions. There are many models as to how climate change will evolve, but for a lot of this we really won’t know until it happens.

From a public health perspective, we need to adapt to the likelihood of more heat waves, more air pollution and more vector-borne disease. One of the perennial challenges for public health is that a lot of what we do is invisible until a crisis comes along. Climate change is a global crisis. We need to act to address it. We need to be prepared, even for the unexpected.